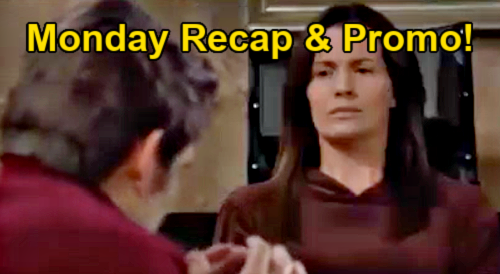 The Young and the Restless spoilers recap for Monday, January 25, tease that Victoria Newman (Amelia Heinle) will be hard at work at Newman Enterprises ahead of her trip to Hawaii with Nikki Newman (Melody Thomas Scott).

Victoria will tell Nikki that perhaps she shouldn’t go on the trip, but Nikki will insist that Victoria get away and relax.

Over at Chancellor Communications, Billy Abbott (Jason Thompson) and Lily Winters (Christel Khalil) will talk about a new business deal that will require a trip to New York City.

Billy won’t be able to go because of the kids, and Lily will agree to go to New York in person and join Billy in on a video chat. Billy will urge Lily to spend some time with his kids soon, and she’ll want to take it slowly.

At Adam Newman’s (Mark Grossman) penthouse, Chelsea Lawson (Melissa Claire Egan) will dream that she can move and talk, and she’ll race out the front door only to wind up in Sharon Rosales’ (Sharon Case) house.

In Chelsea’s dream, Adam and Sharon will be together with champagne, and Chelsea will be horrified. Chelsea will then wake up, and she’ll move her hands slightly.

At Society, Adam will meet with Nate Hastings (Sean Dominic). Adam will tell Nate that Chelsea’s recovery has stalled, and that Dr. Lena Cavett (Dana Sparks) suggested adding a psychologist to the team.

At Crimson Lights, Lily and Amanda Sinclair (Mishael Morgan) will have coffee, and they’ll decide that Amanda will go to New York City with Lily on her business trip.

Amanda will rehash what happened with her birth mom and she’ll vent about the restraining order that Imani Benedict (Leigh-Ann Rose) got on her.

Lily will suggest that Amanda go public with her story to get back at the Benedict family, and Amanda will refuse, but she’ll say that she reserves the right to change her mind in the future.

Later, Amanda will see Nate, and the exes will have a nice, civil conversation, including a discussion of Amanda’s recent interactions with the Benedict family.

Katie will emerge and Billy will make her smile by dancing goofily with her. Together, Billy, Katie, and Victoria will have some nice family time.

Soon, Nikki will arrive to pick up Victoria for their Hawaii trip, and again Victoria will balk at the thought of leaving. Nikki will insist that Billy put Victoria’s suitcase in the car, and Nikki will tell Victoria that now’s the time to prove that she’s not a workaholic.

Back at Adam’s penthouse, Adam will talk with Chelsea, saying that he just talked with Nate and that she might need some additional health – a mental health expert.

Chelsea will know exactly who that someone should be, and sure enough, Adam will say that he wants it to be Sharon. Chelsea will blink twice for “no.”

Adam will do his best to persuade Chelsea about how great Sharon is, which will irritate Chelsea. Eventually, Chelsea will agree, blinking once for “yes.” Chelsea will think to herself that she needs to keep her enemies close.

Adam will then take off for Sharon’s house, and Chelsea will think to herself that maybe Sharon will help her to get stronger so she can throttle her.

Victoria will call Billy and overhear Katie and Lily talking and laughing in the background and get upset.

Adam will explain that after Sharon’s visit, Chelsea made a breakthrough, and Sharon will be incredulous that Adam wants her to agitate Chelsea to help with her recovery.

Adam will say that he asked Chelsea about it and she blinked once for “yes.” Adam will ask Sharon to think about helping Chelsea.

Monday’s episode of Y&R is going to be terrific, so be sure to tune in! We’ll give you updates throughout the weekend as more Y&R news comes in. Stick with the CBS soap and we’ll keep you up to speed on the latest Young and the Restless spoilers, updates, and news.

Next week on YR: pic.twitter.com/NkdZBTQSF7