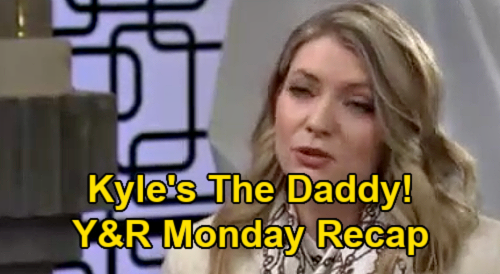 The Young and the Restless spoilers recap for Monday, March 1, tease that Abby Newman-Abbott-Chancellor (Melissa Ordway) will be catching up with Nina Webster (Tricia Cast) at the Chancellor mansion when Ashley Abbott (Eileen Davidson) arrives.

Abby will express worry that the contracts may fall through regarding the surrogacy, and Ashley will encourage and support Abby.

Meanwhile, at Devon Hamilton’s (Bryton James) penthouse, he and Amanda Sinclair (Mishael Morgan) will work on their baby contract.

Amanda will want a strict, detail-laden contract, but Devon will be more easygoing about it. Amanda will admit that part of her attitude stems from her own experiences.

Soon, Abby will arrive with a gift for Devon – a framed photo of Katherine Chancellor (Jeanne Cooper). Amanda will see the depth of Devon’s friendship with Abby, and later she and Devon will flirt happily, having overcome their disagreement about the contractual issues.

At Crimson Lights, Victor Newman (Eric Braeden) will speak briefly with Phyllis Summers (Michelle Stafford), and he’ll wonder how Summer Newman (Hunter King) is doing, since it seems that something’s been weighing on her.

Phyllis won’t offer any details, and she’ll suggest that Victor take a step back, which will amuse Victor.

Later, Ashley will come along, and she and Victor will discuss Abby’s surrogacy situation. Ashley will be worried since Abby lost a pregnancy once before.

Victor will reassure Ashley, saying that everything just might go right and that they’ll have a beautiful grandchild that’s the product of three powerful families.

At the Grand Phoenix, Kyle Abbott (Michael Mealor) will be stunned to see Tara Locke (Elizabeth Leiner) in the lobby. Tara will want Kyle to drop his inquiries, but Kyle will insist on knowing if Harrison Locke is his son.

Tara will eventually admit that Harrison is Kyle’s son, and she’ll tell him to drop this for good and not to come looking for them.

At Jabot, Summer will return from her trip to Los Angeles and tell Sally Spectra (Courtney Hope) that her trip was a success. When Summer mentions the dirt she has on Sally, Sally will hint that there’s more to Kyle’s New York dirt, which will upset Summer.

Sally and Kyle will be talking about Jack Abbott (Peter Bergman) when Jack walks in. Jack will ask Sally to go so he can talk with Kyle, and Kyle will notice the vibe between Sally and Jack.

At Society, Mariah will arrive to meet with Brittany Hodges (Lauren Woodland) and Tessa Porter (Cait Fairbanks). Mariah will be sure that a short, sweet contract is in order, but Brittany will say that they need to discuss details.

Brittany will suggest that Mariah talk with a therapist, and Tessa will agree.

Mariah will balk, and she’ll agree to use her mom as a therapist. Brittany will have a host of other issues to discuss, and after their meeting, Mariah will ask Tessa if she’s really on board. Tessa will reassure Mariah that she’s all in.

Back at the Grand Phoenix, Summer will see Phyllis, and she’ll lament about how she let Sally get to her. Phyllis will say that she’ll handle it from here, worrying Summer, but Phyllis will insist on “taking care” of Sally.

Back at the Chancellor mansion, Abby will return from Devon’s place happy that the contracts are coming along nicely. Abby will tell Nina that she feels content and surrounded by love. And back at Jabot, Kyle will press Jack for details about what’s going on between him and Sally.

Jack will say that he has a question for Kyle, and he’ll demand to know why Kyle reserved the Jabot jet for a New York trip and then cancelled it. Just then. Summer will walk in and wonder why Kyle was going to New York.

Monday’s episode is going to be fantastic, so don’t miss it! We’ll give you updates throughout the weekend as more Y&R news comes in. Stick with the CBS soap and don’t forget to check CDL often for the latest Young and the Restless spoilers, updates, and news.