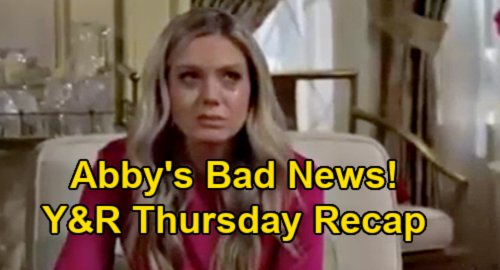 Adam will leave at Dr. Cavett’s urging, so that Chelsea doesn’t have an audience during the session.

Meanwhile, over at the Grand Phoenix, Amanda Sinclair (Mishael Morgan) will fume over having received a restraining order to stay away from Naya Benedict (Ptosha Storey).

Amanda will be incensed, telling Devon Hamilton (Bryton James) that this is just another way for the family to tell her to go away and throw their weight around.

After Amanda leaves to head to work, Devon will see Nate Hastings (Sean Dominic) and Elena Dawson (Brytni Sarpy) walk into the lobby. Devon will say that his little brother Moses Winters (Dax Randall) is 16 now, and that he’s considering coming to Genoa City to finish out high school.

Devon will say that Moses wants to go into medicine, and that he could use a role model.

Nate won’t think that it’s the right time to take on something like mentoring someone, and Devon will be disappointed but will say that Nate can change his mind later if he wants. After Devon goes, Elena will think maybe Nate simply didn’t like the messenger and turned down the offer for that reason.

At the Chancellor mansion, Chance Chancellor (Donny Boaz) will come home with ice cream for Abby Newman-Abbott-Chancellor (Melissa Ordway). It will be established that both Abby and Chance have doctor appointments to make sure that they are both healthy and in good shape to have children.

At Newman Enterprises, Victoria Newman (Amelia Heinle) will be working late when Nikki Newman (Melody Thomas Scott) arrives and urges her daughter to take a break.

Victoria will mention that the kids have an ice-skating function tonight, but that she can’t take them due to a meeting. Victoria will be pretty sure that Billy Abbott (Jason Thompson) will be able to take the kids.

At Chancellor Communications, Amanda will arrive and immediately congratulate Billy and Lily Winters (Christel Khalil) on the acquisition of “Ask MD Now.”

Billy will take off, and Lily will ask Amanda about her meeting with her birth mother. Amanda will share about the restraining order, and Lily will let Amanda vent and talk her down a bit.

At Crimson Lights, Sharon Rosales (Sharon Case) will be working when Adam comes in. Adam and Sharon will have a cordial talk, with Sharon asking about how Chelsea and Connor Newman (Judah Mackey) are doing. Sharon and Adam will be talking when Rey Rosales (Jordi Vilasuso) walks in and interrupts.

Rey will ask about Chelsea, as will Chance when he walks in. Adam will be bristly, telling Rey and Chance that there’s no reason to be so polite just because of Chelsea.

After Adam walks out, Sharon will say that Adam seems to be in a lot of pain. Later, Rey and Chance will talk, and Chance will open up a little about how he and Abby are trying to have a baby.

At Society, Billy will be picking up takeout, when Victoria walks in and tells Billy about the kids’ school fundraiser tonight. Billy will say that he has plans with Lily, but that he’ll change his plans and take the kids skating. Victoria will then head to the bar where she’ll notice that Abby is glum.

Abby will share her pregnancy woes, and Victoria will remind Abby that she’s been down this road before, but then she eventually had Katie Abbott (Sienna Mercuri). Victoria will tell Abby to stay confident and remember Katie, her miracle baby.

Across the restaurant, Nate and Elena will dine, and Elena will broach the topic of Nate possibly mentoring Moses. Nate won’t think that he’d be a good role model, given how angry and bitter he still is about his injury. Elena will think that Nate is wrong, and that he should definitely help his cousin.

Back at Chancellor Communications, Billy and Lily will talk business, and Billy will disclose that he’s got to take the kids to a school fundraiser later, which will interfere with their plans. Lily will be good-natured about it, and later she’ll order dinner for one as she sits alone in the office.

At Devon’s penthouse, Amanda will arrive upset because Naya sent her a text saying that she’s sorry that Imani Benedict (Leigh-Ann Rose) took things to such an extreme. Amanda will be peeved that her birth mother just let Imani make all the decisions, and Devon will think that Naya should be proud of Amanda.

Amanda will insist that she doesn’t need anything from Naya, and she’ll fume that the family is so concerned about its reputation. Amanda will just want to forget about Naya’s so-called apology.

Back at Crimson Lights, Billy and Victoria will meet up inside while the kids are on the patio having hot chocolate. Victoria will spring on Billy that her meeting wrapped up earlier than she thought, and that they can all go skating as a family. Billy will be noticeably upset, but he’ll agree to go.

Back at Adam’s penthouse, Adam will return to find Dr. Cavett reassuring Chelsea and saying something about things not going well. While Dr. Cavett is getting her coat, Adam will tell Chelsea that she’s a fighter and will make a full recovery.

Dr. Cavett will tell Adam that it’s important to stay upbeat. Later, Sharon will text Adam saying that if Adam needs anything, to let her know.

Finally, back at the Chancellor mansion, Chance will return to find Abby upset. Abby will say that her appointment with the doctor didn’t go well, and that she needs surgery to find out if some scar tissue left over from her miscarriage is why she’s not getting pregnant.

Chance will reassure Abby, saying that they’ll eventually have the family they want.

It sounds like a lot of Y&R drama is heating up for Thursday’s episode, so stay tuned! Stick with the CBS soap and don’t forget to check CDL regularly for the latest Young and the Restless spoilers, updates, and news.