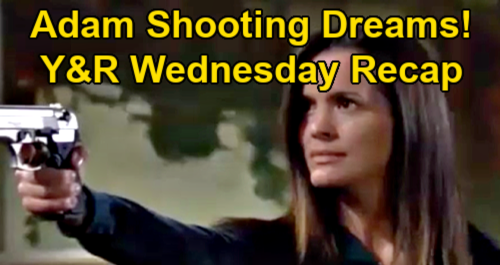 The Young and the Restless spoilers recap for Wednesday, March 3, tease that Kyle Abbott (Michael Mealor) will have a chat with Traci Abbott (Beth Maitland) at the Abbott mansion.

Kyle will be feeling nostalgic about his childhood and how lucky he was to have Jack Abbott (Peter Bergman) in his life. Kyle will think that every kid should have a dad like his, and he’ll clearly be thinking about his own son, Harrison Locke.

Meanwhile, at Jabot, Summer Newman (Hunter King) will try to access Kyle’s phone, but she’ll discover that his password has been changed. Jack will enter the room looking for Kyle’s phone, and Summer will say that she’ll give it to Kyle later.

Summer and Jack will talk briefly about Sally Spectra (Courtney Hope, and once Summer goes, Sally will text Jack saying she has a surprise for him.

Summer will head to the Grand Phoenix, where she’ll promptly tell Phyllis Summers (Michelle Stafford) that Kyle’s hiding something from her.

Summer will want Phyllis to hack into Kyle’s phone, and she’ll tell Phyllis the whole Tara Locke (Elizabeth Leiner) story, minus the part that Summer doesn’t know about three-year-old Harrison.

Phyllis will instruct Summer to forget about hacking Kyle’s phone, and to go to Kyle and demand the truth from him once and for all.

Back at Jabot, Kyle will learn from Jack that Summer has his phone, and just as Jack is demanding to know why this seems to upset Kyle, Summer will walk in to return Kyle’s phone.

Kyle’s phone will ring, and he’ll step aside to take a call from Tara, who will say that she and Ashland Locke (Richard Burgi) are coming to Genoa City next week on business, and that he should not mention the past if he sees them.

Kyle will disconnect, then Summer will want a word alone.

Jack will take off, and Summer will ask Kyle to respect her enough to be honest with her. Kyle will sit down and tell Summer that nine months after his relationship with Tara ended, she had his child.

Next, over at Crimson Lights, Nick Newman (Joshua Morrow) will tell Faith Newman (Alyvia Alyn Lind) that they caught the teen who posted the photo of Sharon Rosales (Sharon Case) and Adam Newman (Mark Grossman) online.

Faith will be relieved, but she’ll be worried about Sharon and Rey Rosales’ (Jordi Vilasuso) marriage.

Faith will note that Adam is a lot like a bully, too, which Nick will agree is right. After some talk about Jordan (Madison Thompson), Nick will tell Faith that her family is here to help her, and Faith will wonder if Nick will ever trust her again.

At Sharon and Rey’s place, Sharon will reluctantly agree to marriage counseling, but she’ll want to put it off until things with Faith are resolved.

That won’t fly with Rey, and just then Nick will arrive saying that Faith is at the stables and wants to talk with him and Sharon. Rey will take off upset.

A short time later, Faith will tell Nick and Sharon that she’s thought things through, and that while Jordan helped her with the mean girls, she also goaded her into dumb decisions.

Faith will tell Nick and Sharon the names of the girls who have been bullying her, and after Nick leaves to head to Walnut Grove, Sharon will address the photo with Faith.

Sharon will tell Faith that there has been a lot of bad with Adam, but there has been good too, and she’ll say that Adam once saved Faith’s life in the tornado, and that he was responsible for Sharon getting psychiatric help.

Faith will ask if Rey is moving out, and Sharon will say no, that they want to work through their problems.

Later, Sharon will call Rey to say that she’s up for counseling. At the same time, Faith will get a text from someone on her new phone saying, “I hope they all pay for the way they hurt you.” Faith will text back, asking who this is.

At Adam’s penthouse, Chelsea Lawson (Melissa Claire Egan) will move her hands to the point where she can move her wheelchair by herself.

Chelsea will stop when Adam walks in to say he’s going to meet with Victor Newman (Eric Braeden). Later, Chelsea will have a fantasy about shooting Adam when he comes home.

At Society, Adam will meet with Victor, who will say that he’s going to buy a media company as its own entity and that he wants Adam to run it. Adam will quickly deduce that Victor wants to get back at Billy Abbott (Jason Thompson) for the exposé over at Chancellor Communications.

Adam will tell Victor that he’ll seriously think about the job.

Y&R is on fire right now, so don’t miss Wednesday’s episode! We’ll be sure to give you more updates as Y&R news comes in. Stick with the CBS soap and we’ll keep you current on the latest Young and the Restless spoilers, updates, and news.