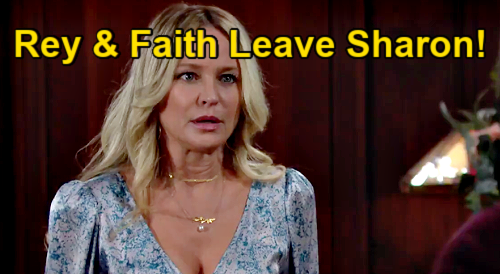 The Young and the Restless spoilers tease that Sharon Rosales (Sharon Case) could have some major life changes coming soon. After Sharon’s cancer battle was finally over, it seemed like perhaps she’d finally get some happiness and calm in her life. But lately, it seems that Sharon is courting trouble on two fronts.

First, there’s the situation involving Sharon’s new marriage to Rey Rosales (Jordi Vilasuso). Rey and Sharon got married in wedded bliss, but ever since they’ve returned home from their honeymoon trip to Miami, Sharon has been once again making Adam Newman (Mark Grossman) a priority in her life.

Most recently, Sharon has agreed to treat Chelsea Lawson (Melissa Claire Egan) by being the therapist on Chelsea’s treatment team.

Really, Sharon should have known that putting herself anywhere near Adam was a bad idea, and during the week of February 8-12, she’s going to seriously upset Rey when Rey walks in on Adam and Sharon sharing a close moment.

Specifically, Rey will walk into his own living room to find Sharon and Adam holding hands and Adam telling Sharon that he doesn’t know what he’d do without her.

Well, after that, Rey’s going to blow his top and issue an ultimatum – that Sharon sever all ties with Adam going forward,

But will Sharon be willing to do that? After all, Sharon gave her word that she’d help Chelsea to fight her way back to Adam, and she’s probably not going to want to renege on her promise. If Sharon doesn’t capitulate to Rey’s ultimatum, then she could risk having Rey walk out on her.

From the looks of the newest Y&R promo, Rey doesn’t look like he’s kidding when he tells Sharon to cool it with Adam, so Rey could bolt on Sharon if she keeps going down this path.

And of course, all this would be happening while Sharon’s facing another difficult crisis with her daughter Faith Newman (Alyvia Alyn Lind).

As Y&R viewers know, Faith has really been acting out lately, and Sharon really got to Faith in a very bad way when she approached Faith’s friend Jordan (Madison Thompson) and basically told her not to be friends with Faith any longer.

Faith overheard the whole thing and exploded on Sharon in the middle of Crimson Lights, and it was a pretty bad scene.

Well, given all turmoil that Faith perceives that she’s going through over at Sharon’s house, Faith might just bolt on Sharon along with Rey.

Of course, Faith can’t just walk out of the house like Rey can, but she could insist on going to live with Nick Newman (Joshua Morrow).

And knowing Nick, he’d probably agree to take Faith in, not realizing the challenge that lies ahead for him.

If Faith does make such a move, and Rey walks out on Sharon, then Sharon could wind up all alone in her home with two estranged family members and only Mariah Copeland (Camryn Grimes) for support.

We’ll see what happens here, but it looks like Sharon could be on a very bad trajectory soon, given the way things are going. Do you think that Sharon will end up miserable and alone?

We’ll be sure to keep you current on all the latest Young and the Restless spoilers, updates, and news. You can count on CDL!

Watch out Genoa City…Bill Spencer is back! 👏 Make sure to tune in to Y&R to see an epic crossover with @don_diamont. 🙌 The Young and the Restless is new this week on @CBS and CBS All Access! pic.twitter.com/Bh7Vbm8z2l

Next week on #YR, Rey gives Sharon an ultimatum, Amanda encourages Devon to open up, and Nate senses that something is wrong. pic.twitter.com/wcoPHWXRVh