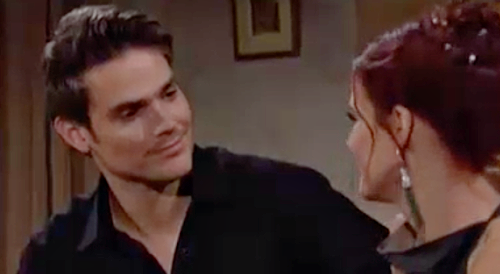 The Young and the Restless spoilers document that Sharon Rosales (Sharon Case) will not be initially focused on Adam Newman (Mark Grossman). Instead, she will be overjoyed that her son, Noah Newman (recast played by Rory Gibson), decided to leave Europe and return home.

Y&R recast the role Gibson now plays as part of an effort to reignite this character. Robert Adamson (Noah) was part of the cast from 2012 through 2018. He returned in 2020 for a farewell.

Adamson’s performances were consistently solid. Gibson is tasked with applying his take on a character that initially debuted at birth in 2005. That was during Shick’s heyday.

Sharon fell in love with Adam several years after Shick split. The SORAS’d (soap opera rapid aging syndrome) version of Adam was written into the show in 2008, with Chris Engen (Adam) being the first adult Adam.

Case and Michael Muhney (Adam) had terrific on-screen chemistry and are known to be friends off-screen. That era allowed Shadam to form and shine for a brief, intense period.

Adam was the anti-Nick for many years, with Justin Hartley’s (Adam) edition being written far more softly and rarely being seen with Sharon. Grossman’s reversed SORAS’d edition, where Adam was written some years younger than Hartley’s edition, has become involved with Sharon again, but they have not reunited as a couple.

Nick Newman (Joshua Morrow) was out of sorts in Tuscany, Italy. While he welcomed Noah to Victoria Newman Locke’s (Amelia Heinle) wedding, Nick needed guidance from his son to get through the ceremony.

Adam also served in the highly unusual position of being Nick’s calming influence and source of advice. He successfully convinced his brother not to disrupt the Vashland wedding by relaying backstory dirt that Jesse Gaines (Jamison Jones) provided.

Sharon knew nothing about the above because she was not on the guest list. But Adam can fill her in when the wedding guests return.

Young and the Restless Spoilers – Sally Spectra Will Not Relent

Sally Spectra (Courtney Hope) was determined to make a play for Jack Abbott (Peter Bergman). She made progress but failed in a love match because of her undisciplined actions.

Adam is her target now. He is appealing, rich, connected, and helps her to turn heads.

Sharon is married to Rey Rosales (Jordi Vilasuso). But she still has Adam in her system.

Adam ended Chadam and believes Shadam is not possible. He also appears to be heading toward an Ally (Adam plus Sally) pairing. Sharon will recognize that potential and respond to it.