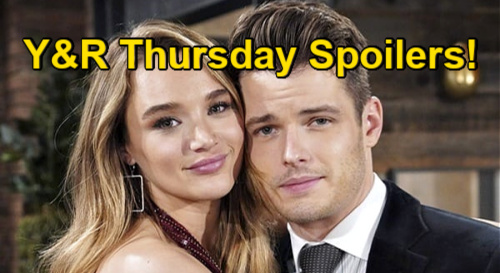 Y&R spoilers reveal that ever since Amanda sought out her birth family, it has been one lie and secret after another. When Sutton was accused of murder, he wanted Amanda to defend him. Amanda has learned more details about Sutton and her birth father.

One was a private investigator and another was Victor Newman (Eric Braeden). Amanda thought that there was finally a resolution to this when she handed over Sutton’s confession. However, it sounds as if he finds a loophole and gets away with murder again.

It is teased that on Thursday, Amanda will consider getting revenge on Sutton. She wants the man to pay for what he did to her father, as well as Naya Benedict (Ptosha Storey). However, revenge can backfire and a man like Sutton exploits the weaknesses of his enemies. He considers Amanda an enemy since she turned on him.

Due to her feeling so passionate about this, it means her emotions can be used against her. If Devon Hamilton (Bryton James) were to know Amanda was considering revenge, he would try to talk her out of it.

The Young and the Restless spoilers for Thursday reveal that Kyle has been trying to reach Summer. He left her a voicemail earlier this week but really needs to tell her what’s going on. It is hinted that “Skyle” finally connect.

The Young And The Restless Spoilers: Summer Newman’s Apology

Expect Summer to make an apology, which nobody expects her to do. Even though she was the one who was targeted and threatened, Summer still feels guilty. She might realize that she should have trusted Kyle enough to tell him what was happening.

Now that this story is coming to a close, what happens with Tara Locke (Elizabeth Leiner) and Harrison Locke (Kellen Enriquez)? Does Sally Spectra (Courtney Hope) even have a future in Genoa City anymore? Will Amanda put a vengeful plan in motion and if so, could it backfire on her?