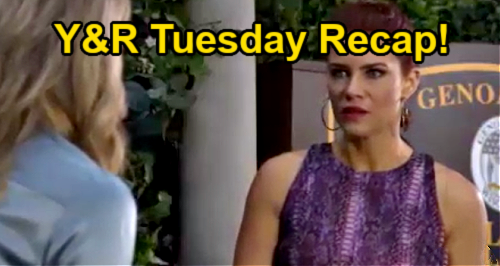 Y&R spoilers reveal that Tuesday’s episode featured Kyle admitting that he couldn’t stop thinking about the video of Tara and Summer. Kyle and Jack both wonder if the two women are responsible for Summer’s move to Milan.

Jack suggests that he confront the mother of his child. Kyle admits that he is scared that if Tara is confronted, then she will disappear with Harrison Locke (Kellen Enriquez).

The father and son’s conversation switches over to Summer. Kyle insists that Summer doesn’t love him anymore and tells him so. Jack reasons that she had to tell Kyle that or he would continue pushing.

Jack mentions that perhaps Summer felt she had to leave to protect his relationship with Harrison. Kyle leaves Summer a message telling her that he still loves her and to call him back. Tara is standing by the door watching and listening.

In Los Angeles, Phyllis meets with Eric Forrester (John McCook) and Angelina Marchetti (Cristina Serafini). During the course of the conversation, Phyllis learns that Eric recommended Summer for the creative director job.

The Forrester patriarch explains that Sally Spectra (Courtney Hope) asked him to do it as a favor. Eric implies that Sally has quite the reputation and history, but is pleased that she’s turning her life around.

Phyllis realizes that Eric was tricked into believing Sally is friends with Summer.

Before Phyllis leaves L.A., she takes a photo of herself with Angelina and Eric, then sends it to Sally. Phyllis also contacts Jack and tells him not to do anything until they talk because she has a huge bombshell.

The Young and the Restless spoilers reveal that Ashland understands that the chemo cocktail isn’t a miracle cure, but he hopes to have more time with Victoria. The couple makes travel plans and talk about savoring every moment.

Ashland suddenly says that they can make the European trip their honeymoon, which leaves Victoria stunned. Ashland explains that he is in love with her and wishes they met sooner.

The Young and the Restless Spoilers: Victor Newman Proud

Victor stops his son and advises him not to destroy Victoria’s accomplishment. Adam is confused and reminds Victor of his words before he went to Europe – that Adam was losing his killer instinct.

Adam thinks that Victor is having a bad side effect from going to Europe and he’s the one that’s lost his killer instinct. Victor tries to explain that he’s proud of Victoria and they should focus on taking down Billy Abbott (Jason Thompson).

The Young And The Restless Spoilers: Tara Locke’s Fear

Sally meets Tara in the park and shows her Phyllis’ photo. Tara gives her own update about “Skyle” and fears their plan is going to backfire.

Sally suggests that Tara keep calm or she’ll ruin everything but it might already be too late.

Be sure to catch up on everything happening with CBS’ Y&R right now. Come back often for The Young and the Restless spoilers, news and updates.