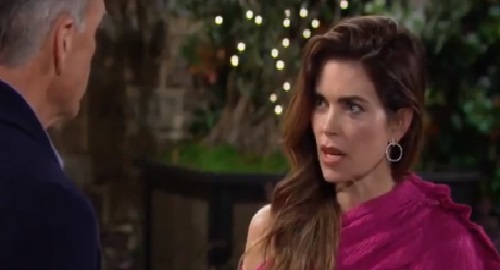 The Young and the Restless (Y&R) spoilers for Tuesday, October 5, tease that Victoria Newman (Amelia Heinle) and Ashland Locke (Richard Burgi) will have a showdown in Tuscany while Mariah Copeland (Camryn Grimes) faces a baby scare. Adam Newman (Mark Grossman) will also spy on Billy Abbott (Jason Thompson), so here’s what Y&R fans can look forward to.

On Monday’s show, Ashland promises to tell Victoria the whole Jesse Gaines (Jamison Jones) story, but he convinces her to let him come clean in Tuscany. That means the engaged couple will land there in Tuesday’s episode – and Victoria will be eager to get some real answers. She just can’t take all the lies anymore and will hope Ashland can offer a full confession before the wedding.

Of course, Ashland might try to stall with sightseeing or some Italian cuisine. He won’t be looking forward to offering all the facts, but Victoria will force a showdown where Ashland confesses. Ashland will admit that a crime’s involved, so that’ll leave Victoria even more determined to learn the truth ASAP.

Ashland should begin his confession on Tuesday’s Y&R episode, but the drama will spill over into Wednesday as well. In the meantime, Adam will spy on Billy and perhaps worry Victoria’s ex is going to blow up the nuptials.

Since Victoria extended an olive branch with that wedding invitation, Adam will hope to build on that. He won’t want to see his sister get hurt, so he’ll be curious about how Billy’s latest scheme will affect Victoria and her future with Ashland.

That brings us back to Ashland’s crime, which he built his entire empire on. It looks like after Camilla Rhodes died, Jesse Gaines’ father served as the attorney who illegally fixed the will and made it so the new Ashland inherited everything.

Gaines’ son took over the practice after his father’s death and apparently became privy to the plot with Ashland, which gave Gaines Jr. the blackmail leverage he used for years. That means the two news stations Ashland started out with and everything that followed happened because of this dirty money.

Ashland’s confession is going to rock Victoria to the core, but let’s talk about another problem that Mariah will blow out of proportion. Mariah will likely get updates on Dominic Newman-Abbott-Chancellor’s slight case of congestion and completely flip out.

Tessa Porter (Cait Fairbanks) won’t want Mariah to fret since Dominic is in good hands, but Mariah will bite her head off as usual. She’ll have a hard time turning off her motherly instincts and won’t be able to stop caring just because they left the Chancellor mansion.

Mariah might even worry she shouldn’t attend the wedding in Tuscany – just in case something happens. Naturally, Mariah is deep in overprotective, paranoid territory at this point. Tessa will do her best to reassure Mariah and will hopefully make sure their Tuscany plans hold firm.