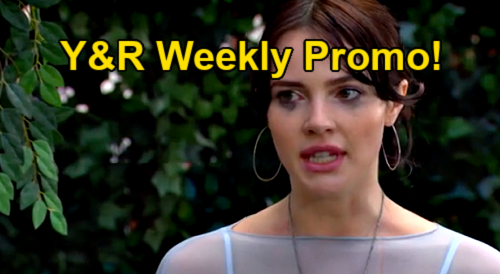 The Young and the Restless spoilers reveal the weekly preview for August 23 to 27 has been released. It appears that fans are going to see some high-octane and heart-thumping scenes this week. Mariah Copeland (Camryn Grimes) falls to her knees as the contractions get more intense. Meanwhile, Tessa Porter (Cait Fairbanks) refuses to forgive the person responsible.

Y&R spoilers reveal that Mariah will start to have contractions. At first, Mariah isn’t sure if she is really going into labor or if the contractions are Braxton-Hicks. After all, it’s not like she can call her OB/GYN.

What Mariah does do is rip the cover off the surveillance camera and begs her captor for help. Mariah pleads with the kidnapper to do something but then things take a scary turn.

In the promo clip, as Mariah tries to stay calm while she thinks of what to do, the contractions intensify. At one point, she actually falls to her knees in pain. So, Mariah’s nightmare that she might give birth while in captivity is coming true.

Meanwhile, Rey Rosales (Jordi Vilasuso) promises to do everything in his power to help find the missing surrogate.

The Young and the Restless spoilers reveal that Abby Newman-Abbott-Chancellor (Melissa Ordway) makes a confession to Devon Hamilton (Bryton James).

Abby admits that as more time goes by, she is becoming more terrified for both Mariah and the unborn baby. It is teased that Abby takes matters into her own hands.

The Young and the Restless Spoilers: Tessa Porter’s Vengeance

All of this time, Tessa is the one that kept telling everyone that something wasn’t right. Tessa knew in her heart that Mariah was in trouble.

Now that everyone else finally realizes that Mariah and the baby boy are really is in trouble, Tessa is furious.

In the weekly preview, Tessa angrily narrows her eyes and says she will never forgive the person responsible. Tessa hopes that they pay the price.

When the kidnapper’s identity is revealed, will Tessa allow the law to handle it or will she try getting vengeance for Mariah? We will have to keep watching the CBS soap to find out what happens next.

Will they find Mariah? 😱 Don’t miss what happens next on all-new episodes of #YR this week! Watch the latest The Young and the Restless episodes for free on @CBS or subscribe for more on @paramountplus. pic.twitter.com/S9aBnwULW7