The Young and the Restless Spoilers: Week of November 15 Preview – Billy Kicked When He’s Down – Ashland & Adam Gloat 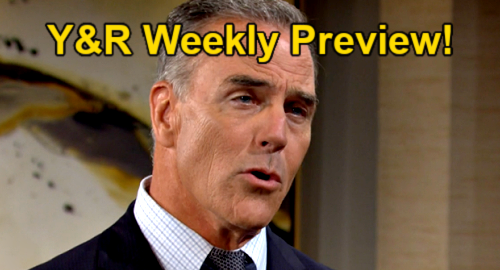 The Young and the Restless spoilers preview video for the week of November 15 to November 19 reveals that Billy Abbott (Jason Thompson) and Lily Winters (Christel Khalil) haven’t seen anything yet. Billy and Lily are still reeling from the exposé published without their knowledge but are about to get kicked when they are down. Ashland Locke (Richard Burgi) is going to sue ChancComm for libel which prompts Billy to threaten Adam Newman (Mark Grossman).

Y&R spoilers reveal that the weekly preview shows that the bombshells are going to keep coming. Billy and Lily are trying to figure out how to handle the exposé on Ashland that was published without their permission.

Once Jesse Gaines (Jamison Jones) shows up at ChancComm claiming that he made the whole story up about Ashland, Billy and Lily know they are in real trouble.

In the preview, Lily is in a panic and tries to do damage control. Lily tells Billy that they have to do everything in their power to defend themselves.

Then, Billy and Lily get another bombshell. Ashland wasn’t kidding when he threatened to sue ChancComm. Billy and Lily are served with legal papers, so Ashland has already started the process of suing them for libel.

This is Only the Beginning

The Young and the Restless spoilers reveal that there might be even more shocking moments in this storyline. Ashland and Adam are having a conversation about their scheme.

Ashland says that he almost feels bad about kicking Billy when he’s already down. Then, Ashland adds, “Almost.”

So, this indicates that Ashland, Victor Newman (Eric Braeden) and Adam are not done with Billy yet.

The Young and the Restless Spoilers: Explosive Threat

In the preview, Billy is on the phone with Adam. Billy’s face is red with fury and his knuckles white as he grips the receiver. However, there is sheer panic in his eyes and he delivers a threat to Adam.

“Adam, listen to me. The gloves are off, do you hear me? They are off!”

What do you think Billy is going to do to retaliate and what will be the outcome? It might be why Lily makes an SOS call, which must be to Jill Abbott (Jess Walton).

What do you think Billy is going to do to strike back at Adam, Victor and Ashland? How will Lily deal with Billy’s explosive reaction and how does Jill plan on saving ChancComm?