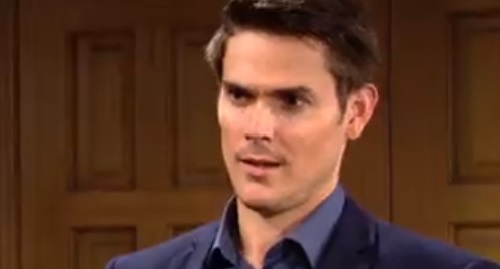 For starters, Adam will take the opportunity to gloat and provoke Billy at Crimson Lights. When Adam spots Billy grabbing some coffee, he’ll cheerfully greet his enemy and ask how Billy’s enjoying early retirement. Adam will be confident Billy’s going to be unemployed for quite some time now that he’s created such a nightmare at ChancComm.

Of course, Billy will argue that Adam, Victor Newman (Eric Braeden) and Ashland Locke (Richard Burgi) are the real culprits in all this. Adam will successfully get under Billy’s skin, so he should consider that another win by the time they wrap up this confrontation.

As for Lily, she’ll be given the opportunity of a lifetime. Jill Abbott (Jess Walton) is thoroughly impressed with the work Lily’s done at ChancComm, so she’ll want to promote her. After Jill rips into Billy, she’ll offer Lily the chance to take over as the new head of Chancellor Industries.

Billy may feel a bit snubbed, but Jill will just concentrate on putting Lily in charge and making sure they still get something out of ChancComm. It looks like Jill will try to sell ChancComm to the highest bidder, so Adam and Victor will prepare for war.

Ashland and Victoria Newman-Locke (Amelia Heinle) should do the same, especially since Victoria will be so fixated on her revived quarrel with Adam.

Other Y&R spoilers say Abby will get a shock when Chance wants to continue his mission. Abby won’t see what mission is left since all Chance’s men are dead, but that’s exactly why he’ll want to press on.

Once Chance reunites with Abby in Majorca, he’ll admit it’s going to be a little longer before he can return to Genoa City.

Chance will want to take down the top dog and get vengeance for the colleagues who died in the explosion, but Abby will fret over his payback fixation and want her husband home to be a father to their son.

It looks like Chance will either cave in or wrap up the mission quickly, so he’ll surrender to Abby’s wishes soon enough. Victor Newman (Eric Braeden), Nikki Newman (Melody Thomas Scott), Ashley Abbott (Eileen Davidson) and Jack Abbott (Peter Bergman) should be among the first to know Chance is alive.

As for Amanda Sinclair (Mishael Morgan), she’ll have two celebratory toasts in the week ahead – one in honor of her new partnership with Imani Benedict (Leigh-Ann Rose) and one involving a celebration of fresh starts.

Devon Hamilton (Bryton James) will be part of the latter, but he’ll face a tough blow when it’s time to give up Dominic Newman-Abbott-Chancellor in the coming episodes.

Until then, Mariah Copeland (Camryn Grimes) will struggle to understand how Abby could abandon Dominic all this time. We’ll also see Mariah get even more curious about Noah Newman’s (Rory Gibson) London drama, which could bring some awkwardness with Tessa Porter (Cait Fairbanks).

Tessa knows more than Mariah does at this point since Noah confided in his ex at the wedding in Tuscany. Mariah may feel like an outsider based on that and all the bonding she’ll see over the new album’s cover art project. It could spark some jealousy and set up some bigger relationship problems down the road.