The Young and the Restless Spoilers: Will Ashland Beat Cancer – Victoria Remains Optimistic? 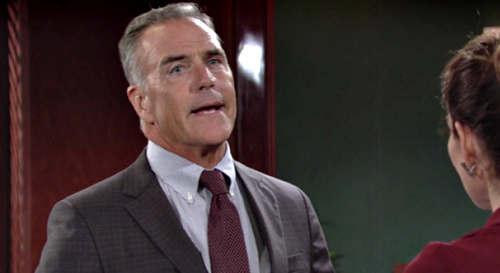 The Young and the Restless spoilers document that Ashland Locke (Richard Burgi) achieved two main goals. He preserved his business legacy by merging Locke Communications with Newman Enterprises. And Ashland married the woman he loves like no other.

Victoria Newman Locke (Amelia Heinle) remains optimistic about her husband’s cancer diagnosis. Ashland wants to be hopeful but harsh realities can not be denied as he strives to achieve his third goal, sustaining life.

Young and the Restless Spoilers – Wink Seen Through Quick Return?

A break normally follows for daytime actors after they film a volume of scenes. But teasers indicate that will not be the case for Burgi and Heinle.

Ashland and Victoria’s quick return to the screen after the Vashland wedding is a reasonable cause for concern. If Burgi were going to remain part of the cast indefinitely, many weeks off-set would have been set in his work schedule.

However, Ashland will receive news regarding his cancer diagnosis that is not good. Nate Hastings (Sean Dominic), who was his unexpected best man, will be consulted for his analysis and a suggested course of action.

Young and the Restless Spoilers – Ashland Locke Dies In 2021?

Burgi’s headshot was blended into the alphabetical listings on Y&R’s cast page, which implied that he would be a regular player. But it could be that Ashland will die within the six-month time frame that he revealed last summer.

It will not be a surprise if Victoria loses her husband before the turn of the calendar year. But it would be sad within the storyline and a loss for the show, as Burgi’s performances are consistently solid.

Ashland exhibits the potential to be a long-term persona in Genoa City, Wisconsin. His dynamic backstory can be mined for years to come. He is linked to the Abbott’s through Harrison Locke (Kellen Enriquez) and the Newman’s through marriage.

Anyone who Victor Newman (Eric Braeden) taps as an approved spouse for Victoria stands in a high place of honor on this soap as well.

Young and the Restless Spoilers – Prayers And Good Medicine

Prayers continue to be offered by those who care about Ashland. The Tuscan minister, who provided God’s blessing to Vashland, is accompanied by good medicine.

Thankfully, Ashland used his free will to change course. His willingness to pursue all forms of treatment could be the decision that preserves his life.

For the sake of his health and Victoria’s happiness, remission or the elimination of Ashland’s cancer is now the only goal on Y&R.