BY Dorothy Gale on March 16, 2021 | Comments: Leave Comments
Related : Recap, Television, This Is Us, TV 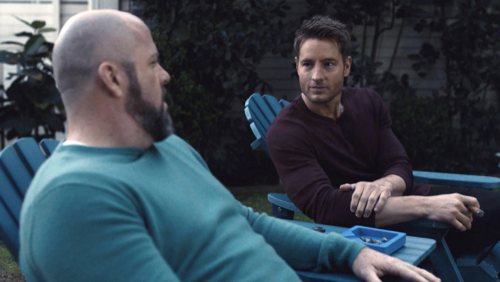 Tonight on NBC their honest & provocative dramedy series This Is Us with an all-new Tuesday, March 16, 2021, episode and we have you This Is Us recap below.  On tonight’s This Is Us season 5 episode 10 called, “I’ve Got This,” as per the NBC synopsis, “Beth navigates qualms with her mother; Kevin and Kate bring their families together for dinner.”

In tonight’s This is Us episode, we see Rebecca and Jack’s first day home with their babies, then Kate and Toby home with theirs, and Kevin and Madison with theirs. We see them all standing over the cribs and saying how lucky they are.

Randall is outside on the deck, Beth goes out and tells him that he can hide out there altogether. He tells her that he appreciates her mother there and helping out when they went to Louisiana, but she is still there. Beth says that she is leaving tomorrow and she is going to make a great dinner before she leaves. They head inside and the girls are acting up, Beth’s mother comes down and immediately she gets the children to behave.

Madison is sitting on the couch, Kevin walks into the house and he bought her a gift, a beautiful dress and he wants to invite Kate and Toby over for dinner. She asks if she can pump and half glass of wine, he says yes. Kevin calls Kate and invites her, she is excited and says she has a reason to shower now this week. Meanwhile, Toby is in a zoom meeting and his makeshift background collapses. Toby finds out that he is their top candidate, he is so excited and looks over at his daughter and says, did daddy possibly just get a new job, he smiles.

Jack comes down the stairs, he is wearing a suit and tie and asks her if she wants to splurge and get a sitter for the kids, she says no, she will be fine.

Toby is in the car with Kate, he is nervous about not getting a call yet about the job, Terrance, the person he had the interview with, said he had to speak to his partners. They are on their way to dinner at Kevin and Madison’s house, Toby asks her not to mention that he lost his job.

Beth is making dinner, she tells her mom she thought it was going to be her last dinner before she is to go home, then she asks her how many more dinners before she leaves. Tess comes down, Beth asks her to set the table. Malik stops by the house to speak to Randall, his ex, Jennifer, reached out and wants to be involved. Malik doesn’t have a problem with it, but his parents wouldn’t be happy about it, because her parents wanted to put the baby up for adoption. Randall says he just found out things about his birth mother at forty, if he had known his mom, it would have saved him a lot of money in therapy.

Kate and Toby arrive at the house for dinner, Kate says the house looks so nice, Madison says that the nanny does it all. Toby gets a text from Terrance, they have chosen another candidate.

Jack is at dinner with the executives from his job and Miguel. Jack tells a story about when he met a pro baseball player. Then we see Toby and Kevin enjoying cigars outside, Kevin tells him that he wonders if he is going to get dad bod. Also, he has been thinking about this whole family fatherhood thing, he wants their families to grow up together.

Toby, Kate, Kevin, and Madison sit down for dinner, they are having sushi. At dinner, Kevin offers to buy Haley a gift and Toby loses it and thinks that Kate told him that he lost his job, but he was wrong, she didn’t. Kevin is surprised. Kevin says he wants to help them, Toby says no. Haley wakes up, Toby gets up from the table to check on her.

Beth’s mother says the food is pretty good but could have used more scotch bonnet pepper. Tess lets slip at dinner that she has a boyfriend. Jennifer keeps texting Malik and Deja asks what is going on and Malik reveals that Jennifer wants back in his daughter’s life. Tess is upset, she thinks Deja took the floor for attention just because Tess just told the family about Alex. The kids all leave the table and Beth then loses it with her mother, says her life is not perfect and she doesn’t care, the only time she worries about is when she is there and passing judgment. Her mother gets up and says she will pack her things.

Kevin and Kate are talking, she says when they were growing up they didn’t have a lot of money and she really didn’t think about it. Kevin tells her that if she is strapped for cash, or his niece or nephew needs anything, she will come to him, what he is theirs. She promises him. Toby apologizes to Kevin, he says it is not about him. Kevin asks if they are good, Toby says yes and thanks to him for dinner.

Deja is on the back deck, Randall comes out and says she found his spot. He tells her that he is sorry that she is upset that he spoke to Malik. She says she is worried that Malik might like Jennifer again. She is mad at Malik, not Randall. Before she came to live with them she had nobody, she says he is her day one and before he spoke to Malik, he should have spoken to her first. He tells her that she will always come first. Then he asks her if she wants to go through Jennifer’s social media and trash talk her together.

Beth’s mother is packing to go, she says her house is so quiet that she has learned to tell the time not by looking at the clock, by hearing sounds outside. She likes being there because of the noise inside the house.

Kate calls her mom and tells her thank you, dad didn’t make a lot of money and somehow they never ever noticed. All the homemade costumes, the backyard birthday parties that were better than Chuckie Cheese. Then we see Rebecca when she was younger with Jack and told him that she was putting 10% of his paycheque in savings.

Kate then goes to see Toby, she tells him that he is the greatest father and provider in the world and no matter what happens, she will always be on his side. She tells him that she got offered a teaching assistant job at the school and she is going to take it, they are going to be ok. He says ok.

Beth comes out on the deck, she put a cooler on it for him and she tells him that her mom is staying indefinitely.

Kevin tells Madison that he can’t stop thinking about Toby. His mom is sick, he is barely speaking to Randall, Toby and Kate are, well they are not going to all live in a compound together. He says it is ok, he is very excited to spend his years with his family. There is a knock at the door, it is his favorite uncle and he says, let’s get this straight, you only named one kid after your favorite uncle.