BY Dorothy Gale on April 6, 2021 | Comments: Leave Comments
Related : Recap, Television, This Is Us, TV 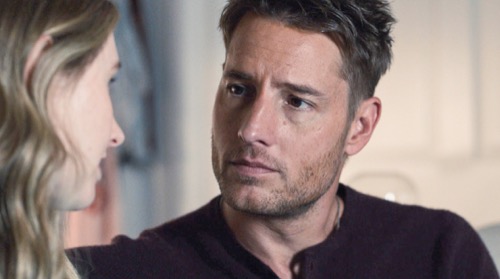 Tonight on NBC their honest & provocative dramedy series This Is Us with an all-new Tuesday, April 6, 2021, episode and we have you This Is Us recap below.  On tonight’s This Is Us season 5 episode 12 called, “Both Things Can Be True,” as per the NBC synopsis, “Jack and Miguel bond; Kevin and Madison navigate challenges; Randall seeks out a new kind of support network.”

In tonight’s This Is Us episode, the episode begins with Jack and Miguel are in their early twenties, Miguel asks if he heard from Rebecca’s dad, he says no and still hasn’t had a chance to tell him that he is going to propose to his daughter.

Kevin and Madison find out that their wedding made a national magazine, and they got the venue that they wanted. Madison is surprised, she says it is a dream pandemic venue. Their wedding planner says she needs the guest list asap. Nick is there and says he would like to help out for the rehearsal dinner, Kevin says great, he can work with Miguel and Rebecca, they are planning it.

Beth tells Randall it is a big day, group therapy. He asks her if she is ok with Tess bringing over Alex for the first time.

Kate is getting ready for work and Toby says he is excited to spend this extra quality time with the kids.

Back to Jack and the proposal, Miguel tells him that he has to practice on him. Jack gets down on one knee and starts laughing. He puts the ring on Miguel’s finger, during the practice and it gets stuck. Jack blames Miguel, and vice versa. Miguel tells him it was a good proposal; he would say yes.

Kevin is alone with Nick; he tells him that he has to email Randall and ask him to be his best man. Nick tells him that is too impersonal. Miguel walks in and Kevin mentions that Nick is going to help with the proposal dinner. Nick asks Kevin if he wants small fancy food or big food. Kevin leaves it up to them and concentrates on his email, but can’t get past Dear, Randall.

The doorbell rings Tess answers it, it is Alex. Beth offers them poppers to eat and Tess grabs the plate and takes it upstairs and says they will eat there when they study.

Randall is it his support group, the man holding the session says it is a trans-racial adoptee support group. Randall says he is new, Nigel as well. Nigel talks first and says he has this need to keep proving himself with his family and it never goes away. Randall says he would just like to keep listening, he doesn’t want to share yet.

The doorbell rings, Jack answers it and it’s Rebecca’s dad.

Miguel tells Nick that he will do his toast after the cocktail, Nick disagrees and Miguel says he is wearing him down all day. Nick replies, “the way you wore down my brother’s wife to get her to marry you.” Miguel is shocked, Kevin overhears and tells Nick to stop. Miguel tells him to say what he wants to say. Nick says his brother cuts him out of his life, and then he (Miguel) swoops in and takes his wife.

Miguel says he didn’t swoop in, he married Rebecca thirteen years after Jack died and wonders every day what Jack would think, and there is only one person to who he owes an explanation, and that is not Nick.

Madison is at the park with Toby, with all the kids. Toby asks her about wedding planning and notices that she is staring off into the distance. He tells her that anything she says on the playground stays on the playground. She says sometimes she has a hard time saying what she wants. He says he is having a hard time with this stay-at-home day thing, he loved his job, he loves his kids, but if he is being honest – he doesn’t love spending ten hours a day with them. Time moves very slowly with the kids. She tells him to talk to Kate, he tells her to talk to Kevin.

Kate gets a message from Toby with a photo of him and their son, she gets emotional and her boss tells her there were a lot of applicants for the job, and she wasn’t his top pick. He gets it, loves her kids, but she has to be present for his students or this is not going to work.

Beth is wandering around, tells her mom it is really quiet. Deja comes down and asks why Tess has her door closed and she and Malik are not allowed to have her door closed during a visit. Beth forgot to discuss ground rules with Tess, she is going up to check on them and her mother tells her to tread lightly. Beth goes upstairs and interrupts the two, they were laying on the bed cuddling. Bess tells them to relocate to the couch downstairs and as she is turning around, Tess calls her a psycho. Bess turns to Alex and says to go home she wants to talk to her daughter about her rudeness. Alex leaves and Tess says she saw the look on Bess’ face when she saw them together.

Back to Jack and Rebecca’s father, who tells him that it took him a long time to get back to him because he was gathering his thoughts. He goes on to say that Rebecca made up his mind about him, with or without his approval, so he will do his best to tolerate it. Miguel cuts in, he says Jack is not the kind of man you tolerate, he is the kind of man you thank your lucky stars that he is marrying your daughter.

Beth goes back downstairs and tells her mother that she did not tread lightly and Tess said that she had a look on her face, a reaction to seeing them together. When Tess came out she was totally fine, but she thinks she is having trouble letting her go. She thought she was going to watch her walk down the aisle and marry a man like her father, she thought she has let all that go. Her mom tells her this is part of being a mother. She tells her to adjust, time is so precious, you blink and your daughter is grown. Beth sings on the sofa beside her mom and puts her head on her shoulder.

Madison and Kevin are home, the wins are finally in bed. Madison tells him that she doesn’t want to get married at the villas. Her father was a pretty holding man, emotionally, and not around a lot when she was little. Her mother put her foot down, told him to take them with him on his business trips, or else. He took them to Japan, they spent a perfect day walking around the most beautiful garden she had ever seen. Her mom laughed a lot, and her dad held both their hands. They had a picnic under the cherry trees, for one day, they were a family. A few weeks later, they told her that they were getting a divorce. She has spent a lifetime chasing the happiness she felt in that garden. There is a garden nearby, that feels the same, he says ok, sounds perfect.

Beth goes in to see Tess, she tells her that she will not call him names, in front of people or in private, it is not what they do. But, she should be able to tell her how she feels. The look on her face had nothing to do with how much she loves her, or about her in general or Alex. Tess tells her that she knows she is trying. She knows she doesn’t have to try with Deja or Annie and it makes her wonder if they will ever be close again.

Kate tells Toby about her day, she apologizes for talking a mile a minute since she got home. He tells her that he has some good photos from the day, he shows them to her.

Kevin still hasn’t gotten past Dear Randall, so he calls him. Randall says he read the big news in the tabloids. Kevin tells him that he is calling to ask him to be his best man. Kevin offers to come out to see him after they all get their shots, so they can have a chat about their childhood. Randall says yes, that would be cool.