BY Dorothy Gale on April 13, 2021 | Comments: Leave Comments
Related : Recap, Television, This Is Us, TV 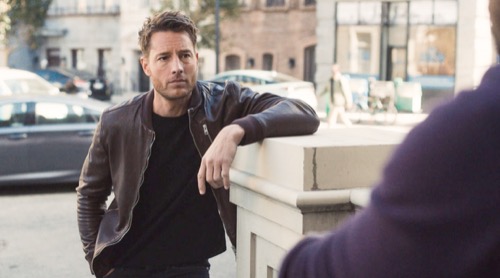 Tonight on NBC their honest & provocative dramedy series This Is Us with an all-new Tuesday, April 13, 2021, episode and we have you This Is Us recap below.  On tonight’s This Is Us season 5 episode 13 called, “Brotherly Love,” as per the NBC synopsis, “ Kevin visits Randall in Philadelphia.”

In tonight’s This Is Us episode, the episode begins with the boys eating breakfast in the living room, Jack turns off the TV, they are watching Mr. Rogers and he tells them the show is filmed near them and he is going to take him to meet him. The boys run upstairs to take off their pajamas.

Randall and Beth are in the kitchen, she tells him that he looks on edge because of Kevin’s visit. He says it is just so formal, he asked for this and he wished he could put it over for another forty years. Beth tells him that this needs to happen. She is taking the girl’s ice skating, she is going to leave them alone. Then she reminds him that he said his acting was trash and his father died ashamed of you, he said they shouldn’t have ever adopted you – it can’t get any worse. Randall says it can get worse.

We go back to when Randall and Kevin were in their late teens, and Randall visits him. They start drinking and partying together, then it is on to a game of beer pong. Randall says aren’t supposed to go out, Kevin says yes, he got them some fake ids. Randall looks at the ID, he says the guy on the card looks 40, Kevin says he is a black guy and so is the guy on the ID, no problem.

Present-day, Kevin arrives at Randall’s house, he tells him the flight was good and then says he is expecting a call from Robert DeNiro because he walked out on him during filming. Kevin says he doesn’t want to beat around the bush, he just feels like it would be easy to catch up and get back into the rhythm without talking about things and there are things he needs to say to him. Kevin tells him that he is not stupid, he knows that it could not have been easy being black and growing up with a white family. He remembers prom, when he was taking a white girl and her father was racist, he should have protected him and he is sorry.

He has been thinking a lot about that and he is sorry if he felt alone, and his childhood wasn’t wanted he wanted it to be. He is genuinely sorry if he ever made him feel alone or bad, ever. He says it is something he should have said a long time ago. Randall says thank you. Kevin says from the bottom of his heart he is really sorry, Randall says he appreciates it and gets up. Randall says it is a very kind sentiment, a beautiful monologue. Kevin says he sounds annoyed with him and he doesn’t know what he was expecting from him.

Randall says he is going to go get a little air. Outside, Kevin follows him and Randall says he wants to be alone. Kevin says he has been alone long enough, he has been cold-shouldering him for about a year now. Randall says that his speech was prepared like he was apologizing for a miscalculated tweet. And after all these years, he is still tone dear. Kevin asks him what he wants from him. The phone rings, Randall left the key inside, they are locked outside.

Jake is in the lineup with the boys to meet Mr. Rogers. Jack registers and gets the boys’ lanyards to wear, he tells them he is going to get the special seats. Jake finds their seats, Mr. Rogers comes out and they are so happy to see him.

Kevin and Randall are outside, Kevin didn’t answer the phone to DiNero and he says he is going to be upset. Kevin tells Randall that he had no intention of accepting his apology. Randall says his apology wasn’t genuine and he just wanted the perception of doing the right thing. Kevin agrees he wanted to do the right thing, he tells Randall that his childhood was glorious, he was there. Randall says he didn’t want to be special, he didn’t want to stand out, he wanted to be like everyone else – and Kevin has racial blind spots, and he is thoughtless. Randall walks away, Kevin gets up and follows him.

Kevin tells him that he had to drink because he was going to spend the night with his brother. The two start fighting and the driver throws them out of the taxi. The two get into a first fight on the lawn of someone’s house. They stop and Kevin tells Randall he doesn’t have his keys, they both get down on their knees to look for them. They look for an hour and they were in Kevin’s pocket the whole time. Randall tells him that he was being rude to the black cab driver.

Kevin says it doesn’t matter what color the cab driver was, he is rude to all cab drivers. Kevin tells him that things were not going well for him out there, he has started painting to express his feelings and he is bombing at all his auditions, his career is going nowhere, and he has everything, Beth and a future. Kevin says he is a family failure, Randall says he doesn’t see it that way.

Present-day, Randall is knocking on his neighbor’s door, she has a spare key. Kevin again tells Randall that he is sorry, sorry for missing things when they were growing up, sorry that he felt alone, and asks how exactly that is racist. Randall says he doesn’t think he is racist, but the microaggression for the years, he wants him to admit that he resents his being black. Kevin tells Randall that he sounds ungrateful, their parents were very good to him.

Kevin asks Randal if he really wishes he wasn’t adopted, Randall says it is not that simple. Kevin says he remembers when he found William and he knows his experiences are different, but he doesn’t see it as he does. Randall asks him if he still paints, he says no. Randall says he started going to a support group. He goes on the tell him that he often pretended that the black librarian and black weather men were his parents, they were the only two adults that he could see that looked like him. The group tells him that is normal. He always thought he was bad for doing this, he didn’t know it was normal when he was growing up.

Kevin tells him that he is sorry, sorry he didn’t see things when they were growing up, and sorry that he still doesn’t see things. He is his brother and he loves him, he is the only brother he will ever have and his best man. Randall puts his arm on Kevin’s shoulder, and tells him that dad didn’t die ashamed of him, he only said it because it was a cheap shot. Their dad was proud of him and he is proud of him. The two hug and tell each other that they love one another.

We see little Randall, staring at the weatherman on TV. Then we see him back in Kevin’s apartment, looking at a painting that he did and they are sharing hot pockets from the microwave.

Present-day, Kevin gets off the phone with DiNiro and says he is the most forgiving man on the planet. He is sitting on the couch with Randall, he asks if he still thinks about his imaginary family, Randall says he still goes there in his dreams occasionally. Even since he founds his parents, he can’t seem to replace the librarian and the weatherman. Kevin says it is a lot.

Kevin then says Randall is not just his smart successful brother, he is his black smart successful brother and does think he resented that. His getting special treatment, he represented his being black and wanted to take him down a notch. He overlooked things, he took shots he shouldn’t of and he was more jealous than he should have been. The family arrives home and the girls are thrilled to see Kevin. Randall watches him with his family and smiles.

In bed that night, Randall is awake, he looks at Beth and then he closes his eyes. He sees the younger him and imagines his parents, but his real parents, no more imaginary family.