BY Dorothy Gale on January 5, 2021 | Comments: Leave Comments
Related : Recap, Television, This Is Us, TV 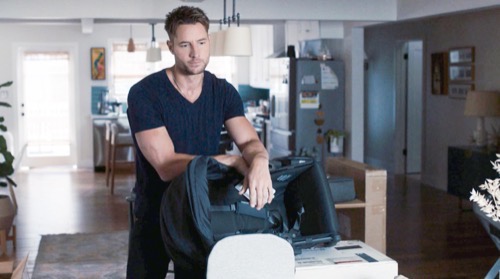 Tonight on NBC their honest & provocative dramedy series This Is Us premiere with an all-new Tuesday, January 5, 2021, double episode and we have the second part of your This Is Us recap below.  On tonight’s This Is Us season 5 episode 5 called, “A Long Road Home,” as per the NBC synopsis, “Kate confronts her past. Randall’s brush with viral fame leads to an unexpected discovery. Kevin debates the best path for his future.”

Toby is shocked to find out that Kate was pregnant when she was young and had an abortion; she says it was one of the toughest decisions of her life, but she doesn’t regret it. He says he is trying to wrap his head around this, then he asks her why she never told him about it before. He is shocked that they talked about pregnancy for two years when they were trying to have Jack and she never mentioned it.

She says she locked it up, she didn’t want to remember because he was so cruel to her. He says he wants to know his name so he can kill her. She says it is in the past, he says it is not, because it took her four years to tell him about it. Later, when Toby is sleeping, Kate googles the boy’s name.

Kevin finished building the changing table, Madison tells him to stop trying to impress the nanny, Kevin says that Natasha is like nanny royalty; she was the nanny for Timberlake. Kevin gets a call, he is heard saying that is not what he committed to, and he is not having this conversation, he hangs up. Madison wants to know who was on the phone, he says his agent and they wanted him to do a job where he would have to leave tomorrow. She tells him to go, he says he doesn’t know.

Randall is at the office, his staff is dressed in boxers over their clothing and dancing around to make fun of him.

We take a look back to when Kate made the decision to terminate her pregnancy, she tells the doctor she is eighteen and not with the guy anymore. The doctor tells her they have to wait twenty-four hours after she makes her decision, just in case she changes her mind.

It’s morning, Kate tells Toby that she cyber stalked her old boyfriend, he is in San Diego and she feels like she has to go see him. Toby says he is in, he will go with her.

Kevin is eighteen, Rebecca finds out that he is going to go to LA for his career, she toasts him during dinner.

Kevin and Madison are interviewing Natasha, the topic of travel comes up and they Kevin and Madison are not on the same page. Meanwhile, Randall is home, he tells Beth that a man contacted him on the city website, who believed he knew Randall’s mother who died in 2015.

The man sent a picture, but Randall has no idea if it is her because he has never seen a photo of her before. Randall says he was wondering for thirty-six years and he is not going down this road, he has his answers, and this new information will mean his father was lying to him.

Randall thinks back to when he father told him about his mother, how she died. Then he tells Beth he is going for a run, she tells him that he should call his therapist.

Natasha left, Kevin tells Madison that he feels like she didn’t like her. Madison says it is all the jet setting around the world, she doesn’t want to do that. She wants to stay at home. He asks her if she wants him to quit acting, it took him twenty years to get there and he is not in a position to tell them where to shoot. She says she is not trying to give him a hard time and she was willing to do this on her own, but she has now fallen in love with the idea of their family. Kevin says he has fallen in love with the thought of their family too.

Kate and Toby arrive in San Diego, at the place where her young boyfriend works today. She thinks back to when she was a teenager and knocked on his door. He makes her breakfast, he remember everything she likes and tells her that he missed her. He asks if she is still upset about the cabin, he says he is sorry. He says he thought her showing up there said that she forgave him. She says she is not there for that, he seems annoyed and tells her to just chill, they can watch some TV. He gets up to get himself a beer, she leaves while he is in the kitchen.

Then we see her in the front of his work, she calls his name, Mark. She sees him outside and tells him that she is Kate Pearson, she found him because she wanted to see him. She wants to talk to him about some things. His boss comes out and tells him he has five minutes. She asks him what he remembers about their relationship. He asks if that is why she is really there to rehash their relationship.

Then he says they were in love, they had the same taste in music, things got intense sometimes, but they were kids. She says she was a kid and he was twenty-four, and he held her self-esteem in his hands. Futhermore, the time it took her to heal from him took her years, and now she has found someone who loves her, who is in the car nearby and wants to tear him to shreds. She tells him that he is broken and a disease.

Kate is in the car with Toby, she says she feels good. And, Mark looked so small with his empty dreams. Toby says he is proud of her.

Randall did call his therapist, he says he put an ad in the paper when he was sixteen looking for his mother. She had thirty-five years to find him and she never did. His therapist tells him he doesn’t know if that is true.

Kevin is saying goodbye to Madison, and he says when he returns he is coming back with a heart that is committed. She tells him to take the time to think about when the babies and this family means in his life, if he is really all in like he says he is.

We see Toby and Kate watching a movie and laughing, a teenage Randall calls Kevin and tells him that he shouldn’t go to LA, he just got married and Sophie is the best thing that ever happened to him. Kevin says he appreciates the concern, but Sophie and he are ok. Then we see Kevin, present day, driving to the airport, he looks at a photo of he and Madison on his phone.

Randall gets a call from Kevin, he tells him that he saw his strip video, it was great. Kevin asks how Beth and the girls are, Randall says they are all ok. Kevin tells him that he finds him in a complicated place with Madison, and he thought, what would Randall do. Randall cuts off Kevin, tells him he has an important call to make, but really, Beth walks in the room. Randall calls the man who said he knew his mother. The man tells Randall that his father was telling him what he knew the truth was, but his mother did die a few days from breast cancer. Randall tells him that he would like to meet.