BY Dorothy Gale on January 12, 2021 | Comments: Leave Comments
Related : Recap, Television, This Is Us, TV 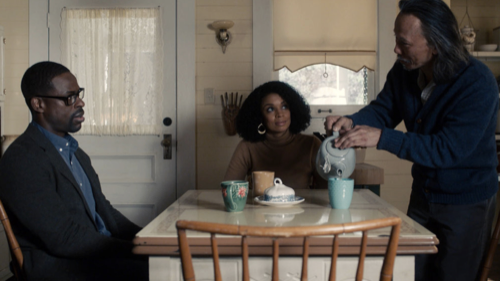 Tonight on NBC their honest & provocative dramedy series This Is Us with an all-new Tuesday, January 12, 2021, double episode and we have you This Is Us recap below.  On tonight’s This Is Us season 5 episode 6 called, “Birth Mother,” as per the NBC synopsis, “Randall uncovers new truths about his past..”

Randall and Beth are on their way to visit Hai. They arrive at the small white house on the water, Hai welcomes the two of them. Beth tells him that he has a beautiful place, Hai tells Randall it is his, it belonged to his mother and now it belongs to him, the land included.

They have tea, Hai tells them that Laurel was a Dubois, a very prestigious family in town. We get a glimpse into Laurel’s upbringing, her father tells her she needs to pay more attention in mass. Her brother, Jackson, tells her not to let their father ruffle her feathers. Laurel leaves the house and walks down by the water. She walks over to her aunt May’s house, he invites her to a swim.

Laurel ends up getting home late, her hair a mess. Her father catches her come in and he tells her if he visits that woman again she will get a lashing. Then we see Laurel again, she is older, and she tells Jackson that she doesn’t understand how their father can hate his own sister. She tells Jackson that she could never hate him. Laurel missed aunt May, but she had Jackson and went he went to Vietnam, she said she had never felt more alone.

We now see Laurel as a young woman, she is in Jackson’s room, she hugs his shirt. Two army officials arrive at the door, she knows they are giving some terrible news about Jackson. Then we see Laurel, sitting down by the water with Aunt May, she asks her what is she going to do without Jackson. Her aunt tells her to go into the water and let it all out. Laurel walks to the water, she is chocked up, she looks up at the sky and starts screaming.

Beth asks Randall if it is too much. He says no, but he just met and lost an uncle in five minutes. Hai tells Randall that his mother was the love of his life.

Hai became a fisherman, to take care of his parents. The day that Laurel was screaming in the water, he heard her and jumped in, he thought she needed saving. He laughs, he says he couldn’t stop thinking about the woman that wasn’t drowning. Later the two met at a market, Hai could barely speak English, but the two were connected right from the start.

The relationship was complicated for her with how strict her father was. One night when she got home after midnight, her father was waiting up for her. He is trying to set her up with a young man named Marshall, he tells her that he is going to propose and he has already given him his permission. And, when he comes to dinner, her answer is to be an easy yes.

Randall gets up, he is frustrated and tells Hai that his “Notebook” story is charming, but he wants to know why William told him that his mother dad. Hai says she did die, the EMT said she was unresponsive, they called in her time of death, and that is when William took Randall and ran. After she left the hospital, she ended up in prison. Hai tells Randall to sit, this is not the “Notebook.”

Hai says Laurel ended up in the hospital, she asked about her baby, the nurses would tell her to relax. She recovered in the hospital for a few days. Then the police showed up and she was arrested for drug possession. In prison, she had one phone call. She called her father, but when she heard his voice, she hung up. Laurel was sentenced to five years, and because the prisons were crowded in Pittsburgh, she was sent to California. She didn’t talk much about that time, and Hai didn’t push, he knew it was painful. But, she did says that there wasn’t a single night that she didn’t think about her child.

She was released in 1985. When she was released she headed back Aunt May. Laurel told Aunt May that she had a baby boy with a man who loved her and she doesn’t know where he is. Aunt May tells her that she should call her parents, they should know that she is back. Laurel says she is not ready. Later in the evening, Laurel, in her nightdress, goes into the water and screams. Then, Laurel is at the market and she sees Hai, they waive. There was not much they could do, Hai was married and his wife was pregnant.

They had a few moments, but nothing real until his wife passed on and his children moved away. They would just see each other at the market, but then one day she was gone, so Hai knocked on her door. At that point she was diagnosed with breast cancer, she had an aggressive tumour and treatment wasn’t possible. Her doctor was wrong, she lived another two years and they spent it together. Everyday with Laurel was perfect for Hai, if only they had more of them. She would say she would think about her son.

Randall gets up, Hai gives him the keys for the house. Hai says he has waited a long time to do this for Laurel, he thanks him. Hai leaves and says he will see them tomorrow for breakfast. Randall tells Beth that they own a farmhouse on a lake, where his birth mother fell in love with her Vietnamese boyfriend. He is holding up fine. Later that evening, Randall leaves the hotel and goes back to the house alone. He goes outside, takes off his sweater and pants, strips down to nothing and goes in the water. He envisions seeing his mother, she puts her hands on his face and calls him her baby.

He says he didn’t even know he was looking for her, and now she is gone. She says all the sadness is weighing him down, he has her eyes and they look tired – he needs to let the pain go. He says he doesn’t know how. He closes his eyes and he screams. She smiles and tells him that she loves him. He says he loves her too.

Beth and Randall are on the way home, he is smiling, she says he looks different, lighter. He says he knows his birth story, and it’s not just being left at a fire station. It is two imperfect people that loved him. He says he is calling Kevin, he doesn’t want to hold on to the bad things anymore, he wants to let go. He calls Kevin, who is frantic, he is on his way home from Vancouver, his whole life is turned upside down, Madison is in labour and never should have gone there. Kevin hangs up.