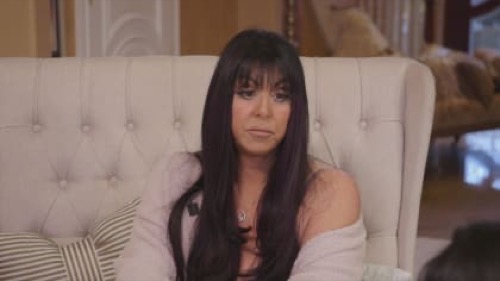 Tonight on TLC their reality show about The Martones and their glitziest family-owned and operated salon, Unpolished premieres with an all-new Tuesday, January 19, 2021 episode and we have your Unpolished recap below. On tonight’s Unpolished Season 2 episode 2, “Where’s The Money?,” as per the TLC synopsis, “Big Mike’s passing and the pandemic have left Jen in a financial mess, putting Bria’s fairytale wedding in jeopardy. Bria and Lexi collaborate on a client’s unique request for her daughter’s birthday. The Martone’s go to extreme lengths for help.”

Lexi and Bria are fighting about the wedding, Lexi wants her to postpone the wedding, Bria says no, her dad wanted her to have the wedding and she is having it no matter what. Mom tells them to calm down, she knows they are all under a lot of stress. Mike passed away and they are left with a big mess, they have to stick together. She would love to provide like Mike did for her girls, but she doesn’t know if she can.

She tells Bria that she is going to try to give her the wedding she wants, she just doesn’t know right now if she can. Bria says she is not telling her not to have the wedding she wants, just to postpone, she doesn’t want to be the fairy tale killer. Bria gets it, but she is not moving the date, she would rather minimize it. Mom does not want them fighting over this and she tells them Mike wouldn’t want it either.

At Foxy and Papa Joe’s house, Jennifer picks up Foxy and just broke her nail. Ever since Mike passed, Jennifer picks her up in the morning for coffee. Foxy tells her that she wants to return to work, Jennifer says they are going to wait at least another week. She is worried because her mother is in her eighties. At the coffee shop, Jennifer won’t let Foxy go in with her, there are too many people. Foxy says she has become the daughter and Jennifer the mother since COVID.

Jennifer opens up about speaking to the girls about finances, it’s hard. Everyone thinks she has a pot of gold somewhere and she doesn’t, it just happened way too fast. Mike didn’t know how sick he was, he argued with her that she was the only one that thought he had terminal cancer, which he did. Next, the two go through the carwash and call Bria to sing happy birthday to her.

At the salon, a client comes in to see Foxy, Bria tells her that they are not taking appointments for her yet, but they will call her when Foxy returns, or someone else can help her. The client only wants Foxy, she is 99 years-old, she is very disappointed that Foxy is there and says she better be there next time, who knows how long she will be around.

Jennifer sits down with Bria and Lexi, tells them that she believes Mike is trying to tell her something. There has been two floods in the basement, she wants a physics to come and speak to Mike.

Lexi and Bria consult a client, she wants to have a party for her daughter who is twelve and she wants nails that are like a Mad Tea Party. And for hair and makeup, she wants pink and green, her daughter’s favorite colors.

At home, Matt says he can’t wait for the wedding to be over and he can eat anything he wants when his diet is over.

Jennifer tells Foxy she doesn’t know if Mike will come with the psychic because he didn’t believe in them. Jennifer Williams, psychic medium has arrived. She brings a hostess gift and says the person on the other side helped her pick it out. She brought a pink girl gnome, she says there is a woman with him and they are acknowledge a birthday. She says he is also with his brother and she, meaning his wife, made the right decision when she put him with his mom and his brother. She says he wasn’t ready to go, he didn’t agree with it. But he is taking care of things on the other side and things will come together. He says the money is coming.

Lexi is hoping that the psychic brought a little peace to her mom ad Bria. Lexi heads to the salon early to work on the nails for the Mad Tea Party.

The teacup has arrived, the one Bria is going to put in the client’s hair for the Mad Tea Party, Bria likes it, Lexi is not thrilled. The client arrives, Lexi put the magnet on the wrong side of the teapot for the nails and goes into a panic. Bria decides to start her hair first, and give more time to Lexi. The whole look is a success, the client loves and the girls are happy that they worked together on this.

Jennifer gets a letter from a bank, she knew nothing about the accounts, just that they must be closed because Mike is deceased. She is hoping that there is a substantial amount of money so she can give Bria that wedding that Mike promised her.