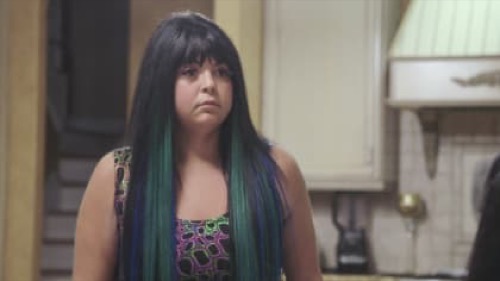 Tonight on TLC their reality show about The Martone’s and their glitziest family-owned and operated salon, Unpolished airs with an all-new Tuesday, February 2, 2021 episode and we have your Unpolished recap below. On tonight’s Unpolished Season 2 episode 4, “Bad Business,” as per the TLC synopsis, “While Lexi works hard on a unique set of amusement park nails, Bria remains distracted by her personal life.

When the salon has trouble making rent, Jen has no other choice but to ask Lexi to step it up, which leads to a mother-daughter blow-up.”

In tonight’s episode Bria is not getting the wedding of her dreams. She was getting married in the middle of a pandemic and so her and her fiancé have to make sacrifices. They have to uninvite people. They originally invited three hundred people to their wedding because they thought their location would be able to accommodate everyone and that they wouldn’t be seating on top of each other, but covid rules are now what determines their guest list. They could only have fifty people at the venue. They have to disinvite over two hundred people and that wasn’t the only thing that had to change. Bria had to cancel the dj. It didn’t make sense for them to have one when they couldn’t have dancing and so her mother came up with the idea to ask the piano man to stay longer. And to cancel the dj altogether.

Jennifer even spoke to Marc herself. She asked him if he could stay for the rest of the night and he told her he was free. He hadn’t made any other plans. He also knew he was going to get paid for the work and so he jumped at the opportunity. Marc agreeing to stay longer was a great weight off of Bria’s back. She’s been struggling with planning a covid wedding. Her mother did suggest that they could postpone it and Bria didn’t want to because the date they chose was the date in which she met Matthew. They met nine years ago on September 12th. Its their anniversary and Bria wants to marry him. She doesn’t want to wait. Bria lost her father recently because he came home telling them he had stage 4 cancer and literally a few months later he was dead.

Bria hasn’t let her father’s passing stop her from planning this wedding. She’s getting married at a castle like she always wanted and everything else and she’s spared no expense on things she could get during this time, but money was becoming an issue for her mother. Jennifer has to deal with a lot of unpaid bills after Mike died. She was even paying bills at the salon using the insurance money she got from her husband and she knows the money wasn’t for that. His insurance money was supposed to be her nest egg. Jennifer was struggling with all the bills coming her way and she wasn’t talking to her daughters about it. Bria was off being concerned about her wedding. Lexi was off working at the salon and still taking appointments.

Lately, Lexi did the nails for Jeanine. Jeanine works at an amusement park and so she wanted an amusement park them done on her nails. It was wild. Lexi included a funhouse with a clown and food like popcorn. She also included a motor with a swing set. It was extravagant and that was needed right now because that’s what was helping pay the bills. Lexi was trying to include these big projects after her regular clients everyday because she knows that bringing in money and, while she didn’t know how bad things were financially, she did know the salon was often empty. People just weren’t going to the salon like they used to. The pandemic changed that for them and their business was hurting.

Jennifer was truly struggling right now. She wanted to do something special for Bria’s wedding and she didn’t have the money to pay for something and so she was going the sentimental route by putting together a scrapbook of family’s weddings. Jennifer went over to her parents. She told them about what she wanted to do and she mentioned her money problems. They told her that she always struggled with money. Jennifer often depended on Mike to get her through everything and now that she doesn’t have him anymore she needs to start coming up with solutions herself. Jennifer was paying for Bria’s wedding. She had saved money for it and now there’s talk of taking money out of that in order to give it to the salon.

Bria was no help. She and Matt were fighting over people they had to cut from the wedding. Bria wanted to act like nothing had changed because of the pandemic and so she no help. She was also womb prepping when she wasn’t doing stuff for the wedding. Bria couldn’t wait to get pregnant and she’s waiting until after she fits into her wedding dress to do it. She was just so excited about getting pregnant that she was doing prepping. She was watching prenatal videos and she and Matt went to a doctor to make sure that everything was all clear for them to get pregnant. Matt has kids already. He got pregnant with something fairly fast and Bria just wanted to make sure that the same thing happens with them. They were planning on getting pregnant on their honeymoon.

Bria wasn’t really working. For that matter, neither was Lexi. Lexi kept getting pulled away to do fun things by her mom and so she wasn’t able to finish her amusement park nails in time. She later had to apologize to Jeanine. Jeanine was hoping to have nails for an event that night though she didn’t necessarily need them right away. She needed them done by the weekend and that worked out great for Lexi because it gave her the extra time she needed. Lexi promised her she was going to focus on those nails. Which she was doing when her mother decided to talk to her about their finances. Jennifer had pushed it off for the longest time because she wanted to find money another way and none of her promotional work was bringing in money.

Not even her fun Italian day at the salon. If anything, it had cost her for shelling out for ice coffees and Italian cookies. Jennifer was in such dire situation that she had to talk to Lexi and she basically told Lexi to bring in more of the extravagant nail work because that’s a big ticket item. Except Lexi was tired. She was working sixteen to eighteen hour days and she wasn’t able to finish her last set of nails because of her mother. Lexi was so tired as it is that she couldn’t have the salon rely entirely on her. She told her mother as much and the two got into a huge fight because Lexi feels her mother isn’t as understanding of her as she is about the wedding for Bria. Bria got to get away with everything. She doesn’t pull her weight. It always Lexi doing the work.

And Lexi was tired. She doesn’t think her mother listening to her or that her mother shows the same concern for her that she does for Bria.