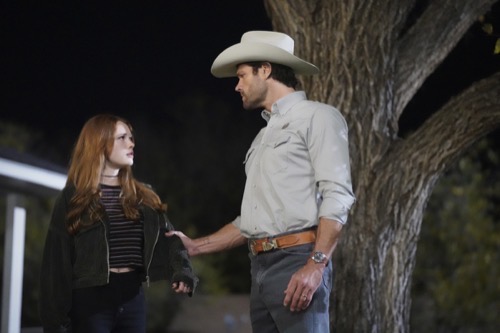 Tonight on the CW their reboot of the long-running series “Walker, Texas Ranger,” WALKER premieres with an all new Thursday, January 28, 2021 episode and we have your WALKER recap below! On tonight’s WALKER season 1 episode 2, “Back In The Saddle,” as per the CW synopsis, “Walker (Jared Padalecki) continues to try to reconnect with his family but finds that his kids have developed new routines with Liam (Keegan Allen).

Back at work, Captain James (Coby Bell) tells Walker he needs to get recertified to be a Ranger, but old memories of Emily (guest star Genevieve Padalecki) hinder his progress. Micki (Lindsey Morgan) investigates a suspicious fire.”

In tonight’s episode Walker recalls a saddle his wife gave him. After grabbing a few things from his old home, he sees his kids hand prints in the cement on his way out.

Micki gets a call from the captain about an arson case. Her and Trey talk about how he will be staying a little longer. She is used to flying solo. Meanwhile, Walker meets up for breakfast with his family at his parents. His mom wants him to get a little stability.

Stella and Bella are at soccer. They are both still benched for getting into trouble. The coach however, changes his mind since a recruiter is coming to the game. He tells Stella she can play. She says no unless Bella can to. It seems he is prejudice.

Walker and Micki hit the gun range before showing off their skills with an obstacle course. On to the horses, Walker has a hard time when he sees the saddle his wife gave him again.

Walker stops by the bar. He and Geraldine get to talking. They talk about Emily. Geraldine admits she closed her eyes the night she was found dead. Walker is surprised. He has so many questions.

Liam meets with his boyfriend for lunch while Walker quietly works the arson case. Micki tells him to stop. He is going to get in trouble.

Walker gets to work in search of a missing horse from the ranch that was set on fire. He finds the horse and rides it to the tarmac where Micki and the captain are. He finds them trying to take down the bad guys. With Walker’s help, they make an arrest.

Liam finds Walker at the bar celebrating with Micki and the captain. He is annoyed that Walker didn’t show up to Stella’s soccer game. If he had he would have noticed Stella never showed either. Walker heads out to find her.

Micki and Walker find Stella at their old home. She is throwing a party. He finds her out front. Stella is mad he left them. She mentions how Uncle Liam tired to get custody of them. Walker is shocked and angry to hear this. He takes off to Liam’s. The fight on the front lawn. Liam explains after their fight that he went dark and disappeared. He needs to stop looking into his wife’s death.

At home, Augusts gives Walker a gift Emily had for him, a poker set. It explains the chip she was found with. Meanwhile, Micki explains that she is scared to Trey. She hasn’t been in a serious relationship like this before.

Stella and Walker text back and forth. They both miss Emily but need to get along. They head to the old house to take up their cement hand prints. One breaks. Stella cries. He comforts her.

Back on the ranch, Walker’s dad talks to him about starting fresh. Inside, they watch a video August made of Emily.