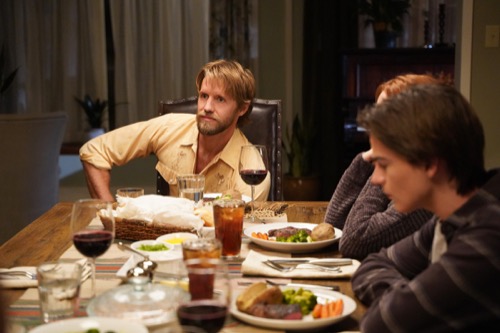 Tonight on the CW their reboot of the long-running series “Walker, Texas Ranger,” WALKER air with an all-new Thursday, February 4, 2021 episode and we have your WALKER recap below! On tonight’s WALKER season 1 episode 3, “Bobble-Head,” as per the CW synopsis, “Walker’s life gets more complicated when his childhood best friend, Hoyt Rawlins, returns to town.

Abeline is thrilled to have Hoyt home but Geri has conflicted feelings for her ex-boyfriend. Meanwhile, Micki has her suspicions about the real reason Hoyt returned to town.”

In tonight’s episode, Walker remembers a time when Emily taught him how to drive a stick. She is very patient while he ripped up her mustang.

17 Years Later – Walker and Micki are on a stakeout. He thinks they need to get to know one another during their downtime. Inside, their target Sharon (an arms dealer) watches a stripper in his chaps dance. Outside, Walker and Micki see people leaving. They run into the strip club only to turn and see someone leaving in Micki’s truck.

Stella and August try to get through another school day while Bonham and Abeline fight over a guest coming to dinner. Walker and Micki get made fun of at their morning meeting for Micki’s stolen truck.

At home, Walker wrestles with the cowboy stripper. They exchange blows before Abeline comes out. She is thrilled to see their longtime family friend Hoyt. At dinner that night Hoyt charms Abby, August, and Stella. Bonham isn’t buying his talk while Walker and Liam have questions for him.

Micki leaves a voicemail for Walker who is still at family dinner. She thinks she has tracked her truck by GPS and weirdly it’s near his house. She arrives and is caught in the dark by gunpoint by Bonham. After exchanging hellos, he invites her to his bunkhouse for steak and a drink. They talk about Hoyt and how he has been a longtime family friend. If Walker could have busted him he would but Hoyt is great at leaving no evidence behind. Bonham tells Micki to wait a bit and Hoyt will screw up.

Walker says goodbye to Hoyt. They make plans for tomorrow. He warns Hoyt he need not be in cahoots with Sharon or he will be taken down. Hoyt isn’t so sure he will get caught.

The next day, Hoyt brings Walker to a storage facility. He has Emily’s red mustang. He won it fair and square and never got rid of it. Walker is overcome with emotion.

Micki reports to the captain about Hoyt and Walker. The captain is calm and tells her to watch them. meanwhile, Geri, Walker, and Hoyt play cards and drink. Micki shows up. Hoyt doesn’t fess up to stealing her truck when she questions him. But when he buys her a double, she cuffs him for bribing law enforcement. Walker protests.

At the station, Micki is holding Hoyt for 24 hours. She tells Walker he needs to learn boundaries and stop blurring lines. Hoyt gives Micki intel about a gun exchange. Walker is surprised. They head there. It looks like Hoyt played them. But Walker has an idea about the real location.

Stella cannot believe August snuck out and went to the bonfire. It looks like he has been drinking too. Later, August attempts to walk across a hot coal bed when Stella stops him. She tries to call Walker but he isn’t answering. She calls Liam instead.

Hoyt calls Abby to tell her he cannot make it tomorrow. He is sorry to let her down. She tells him he didn’t. She senses his stress and tells him he isn’t bad like his family. He saved her boy.

Liam and Brett pick up Stella and August. Micki and Walker get their bust and they get Hoyt. Walker feels bad but Micki reassures him it could have been worse.

The next morning, Walker takes Stella to her hearing without his uniform on. August goes too. They take the mustang. Meanwhile, Bonham tries to talk to Abby about Hoyt. She isn’t having it.

Micki drops off a toy ring Hoyt left for Geri. She apologizes for taking him in. Geri tricks her into buying her an expensive shot. Walker teaches Stella how to drive stick while August sweats off his hangover by running.