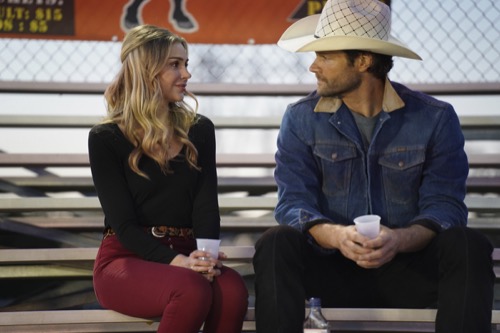 Tonight on the CW their reboot of the long-running series “Walker, Texas Ranger,” WALKER air with an all-new Thursday, February 18, 2021 episode and we have your WALKER recap below! On tonight’s WALKER season 1 episode 5, “Walker is forced to resume his undercover identity to keep his family safe.

Micki gets caught up in Walker’s old case; August threatens to blow his father’s cover; Trey starts his new job.”

Walker is cleaning up stalls undercover when he is challenged to ride a bull. He meets a nice woman named Twyla.

Walker’s flashbacks from his time undercover are getting to him. He stinks his head in cold water in the bathroom. Stella knocks, interrupting him. He heads out to see the kids before they head to school. He reminds August he is grounded for getting drunk. Meanwhile, Micki is up and getting breakfast. Trey is peppy already, excited about his job at the high school where he will coach. He also asks Micki about maybe going to Vegas to meet his mom. Micki is annoyed he is doing this all this morning. She apologizes and asks to talk later.

On a side road, Walker changes out of his rangers uniform and into street clothes. Across town, Micki walks into work and is bombarded by the FBI. They want to know what she knows about Walker’s undercover case. When the case closed, $300k was still missing and they have been watching. It seems Twyla Jean has been talking to Walker who she knows as duke. Micki cannot believe they would also insinuate that Walker may have something to do with this all.

Walker heads to a motel where he meets Twyla, slipping back into the role of Duke. They kiss but he stops it, sharing he is out on bail. Twyla wants to know where the money is. He tells her he doesn’t have it. She needs the money and she is pretty sure the FBI is tailing her. He tells her they need to get out of town together.

At home, August tells his friend how he thinks his dad has taken off undercover again. Walker and Twyla drink at a bar to clear their head. They get up and dance. Walker has a flashback of telling her about how he lost his brother. Micki is across the bar in street clothes. When she sees one of the known robbers, Jaxon, come in with a gun, she rushes in and plays off like she is Walker’s back-up. Walker looks shocked but doesn’t blow their cover.

At practice, Trey notices something is wrong with Stella. She tells him she will work it out.

Walker and Micki work to make themselves believable and work to set up a new job to get Jaxon and Twyla behind bars. The captain, the FBI agent, and Liam are all listening in as Micki is wearing a wire. Liam has a flashback of when Walker wanted to end the sting early but Liam pushed him to wait until they were in the bank on the job.

The next day, Micki and Walker meet up with Twyla and Jaxon. Jaxon tells Micki if she is going to join their team, she needs to ride the bull. She does and stays on for a bit. A car pulls up. They think it is the Feds. Walker offers to handle it. He walks to the car to find August! He yells for him to get out, telling the others just kids trespassing. August, however, has no idea his dad is undercover and only saw Twyla, thinking his dad was leaving for good.

Trey tries to help Stella at practice. She vents about her family and how she used soccer to get through it all.

Walker, Micki, Jaxon, and Twyla all get ready for the job, prepping their guns. Walker has flashbacks of the robbery prior; the shots, the screams. Walker has an epiphany, he knows where the $300K is. He tells the others. Twyla hits Jaxon on the back of the head and pulls a gang on Walker and Micki. She backs out of the room and then runs for it.

Walker finds Twyla. She pulls a gun on him. But he gets her to dance. She hears a click. The team is behind her, ready to take her in. Still working undercover, Walker also runs for it, forcing the FBI agent to shoot him. He falls into the pool outside. They haul Twyla away, making her think Walker is dead.

Liam goes to the Captain and tells him something is off with Emily’s murder. He has been looking into it. Meanwhile, Micki and Trey talk. She is ready to meet his mom. Walker comes home to the kids and tells them it is all over. He tells August he was never going to leave. He needed to finish out the job. They are safe. They all go outside to burn any evidence of his alter ego Duke. August lights the match.