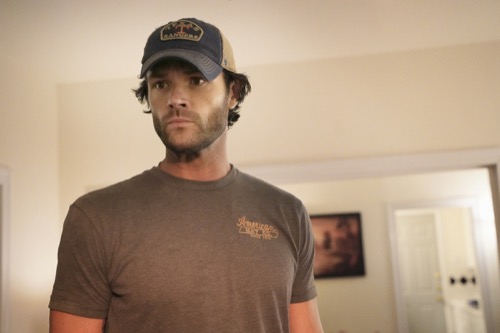 Tonight on the CW their reboot of the long-running series “Walker, Texas Ranger,” WALKER air with an all-new Thursday, June 10, 2021 episode and we have your WALKER recap below! On tonight’s WALKER season 1 episode 14, “Mehar’s Jacket,” as per the CW synopsis, “Walker (Jared Padalecki) takes Stella (Violet Brinson) and August (Kale Culley) on a road trip to discuss some devastating news. Meanwhile, Captain James (Coby Bell) enlists the help of Micki (Lindsey Morgan) and Trey (Jeff Pierre) to find a missing military veteran.”

In tonight’s episode of Walker, Clint has Walker at gunpoint on the front lawn after shooting Liam. The whole family has rushed out of the house to see what is going on. Clint and his men force everyone into the house. He tells Walker to call Micki. He wants Jaxon out of jail. Walker tells him he cannot help him. He brings Walker out to the stables. They exchange threats.

Walker’s dad arrives home and sees a truck up the drive. He gets out and walks on foot, finding Liam on the ground. Liam is alive. He drags him to the stables. Walker’s dad calls Micki but before he can say much, Clint comes out. Inside the house, Walker tries to talk to Clint’s son. Clint comes back in and begins terrorizing all of them with more threats. Walker offers to do anything so he will stop. Clint wants to rob a bank. Walker and Hoyt get ready to go. Just then, the captain calls. He doesn’t detect anything strange with Walker.

Inside, Stella pleads with Trevor. Her uncle is going to die. Walker and Hoyt arrive at the bank. Walker apologizes to him. Hoyt tells him not to. He can finally help him. He is an outlaw. They head into the bank. Meanwhile, Trevor tries to help Stella put pressure on Liam’s chest. Clint has Walker’s parents tied to a chair as he asks questions. He tells them about how Walker betrayed him while she worked undercover. Clint then calls in the bank robbery as his men stand outside watching Walker.

Hoyt comes into the bank behind Walker, acting as if he has him as a hostage. Keeping Walker at gunpoint, he gets the money. They run for it with the cops on their tail. They lose the police after hiding off the side of a bridge. Micki comes out of nowhere. She wants to know what the hell is going on. He tells her. She wants to help. He tells her no. She lets them leave.

Clint calls out Walker’s dad for a bag he has brought home. It has pills. He knows what they are, cancer pills. Walker’s mother didn’t know. Meanwhile, Stella calls Micki’s boyfriend, a medic. He walks them through how to cauterize Liam’s wound. Liam screams. Clint comes in, angry they helped him.

Walker and Hoyt arrive. They all head outside. He throws Clint the money but it isn’t good enough. They get into a shoot-out. Walker’s dad takes out one of the men. Hoyt helps but gets hit by a bullet. The whole family rushes to Hoyt. He loses too much blood and dies quickly. Clint comes at Walker with a gun. He had to take of his own. Walker goes crazy and attacks Clint. They fight. Trevor pulls a gun on Walker. Micki comes out of nowhere. She tells Trevor to put the gun down. He listens. Clint tries to shoot Walker but he is shot himself by Liam, coming from the house.

Walker runs to Liam. The kids run to him. The police backup arrives. Later, Walker heads in to find out what the board determined for him. The captain tells him 2 weeks probation. Walker turns in his badge. His life caught up to him, he got his best friend killed. He can’t do this.