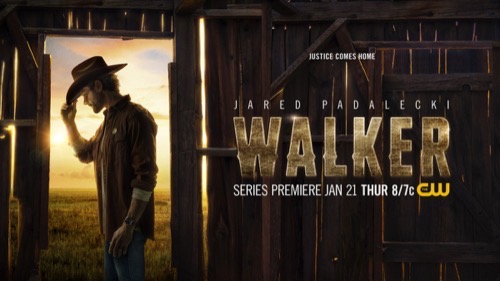 Tonight on the CW their reboot of the long-running series “Walker, Texas Ranger,” WALKER premieres with an all new Thursday, January 21, 2021 episode and we have your WALKER recap below!

On tonight’s WALKER season 1 episode 1, “Pilot,” as per the CW synopsis, “Texas Ranger Cordell Walker (Jared Padalecki), a widower and father of two with his own moral code, returns home to Austin, TX, after being undercover for two years, only to discover there’s harder work to be done at home. As Walker attempts to reconnect with his creative and thoughtful son August (Kale Culley) and his headstrong, somewhat rebellious teenaged daughter Stella (Violet Brinson), he finds that he needs to navigate clashes with his family.

Cordell and the family are playing a board game when he gets a terrifying call from his wife Emily. She is upset, out of breath. She tells him something isn’t right. He hears gun shots. She goes silent. Cordell goes to find her. Later, he screams by the side of his truck.

Eleven Months Later – An officer finds Cordell drinking at night in his truck. She takes him home. He admits he hasn’t been home in a while and hasn’t seen his kids. He also shares he is a Texas Ranger.

In the days that follow, Cordell starts running, living life and getting back on track. He pays his dad a visit. Not much of a talker but supportive, his dad tells him to go see his mom and his kids.

Cordell arrives at his parent’s to see his mother, brother and kids. They all welcome him with open arms. Later, he gets back to work meeting a law enforcement associate on a case and none other than the female officer who drove him home drunk is new to the unit and on the case. Neither of them say much but share awkward smiles.

Cordell arrives late to family dinner. His daughter isn’t there. It seems her activities and friends have changed since he has been gone. Cordell insults his parents for some of the choices they made for her. They aren’t having it. He wasn’t around. The police call. Cordell is called to pick up Stella.

At the station, Stella is mad and not happy to see him. He takes her home after meeting her friend who was with her.

Micki Ramirez arrives home after spending some time with her new unit. She finds her boyfriend back from work. Meanwhile, Cordell meets his brother at the local bar for a drink. He is then called to work. He and Ramirez meet up. They head out to work a case.

They arrive at a local store to ask some questions when a thug they are questioned makes a comment about Cordell’s wife. He loses it. Micki steps in. After, Micki brings him to her house to clean him up. Cordell meets M<icki’s boyfriend. She seems uncomfortable for them to meet and talk.

Cordell cannot find Stella. He heads to her friends house. The one she got in trouble with. The friend’s mother admits she and her husband do not have their papers yet and the other night at the police station was scary. They could be deported. Cordell shares he will help if he can.

Cordell and Micki make some head way on their case. She tells him she will deal with it. He needs to find his daughter. After some looking, he finds Stella. She is mad he took off for so long and upset still over her mom.

Cordell finds Micki in a situation when she realizes the wife of a businessman is behind drug smuggling. She takes her down with the help of Cordell.

Cordell arrives home to see his brother. He tells Cordell he needs to get it together. Stop thinking he failed his wife. Cordell cannot let the vision of her go when he found her dead. He heads in to talk to his mom. She suggest he move into their guest house. He could be with them and the kids. He heads out the property with his son. They decide to spend the night. Stella shows up. It is finally the three of them in front of the fire.