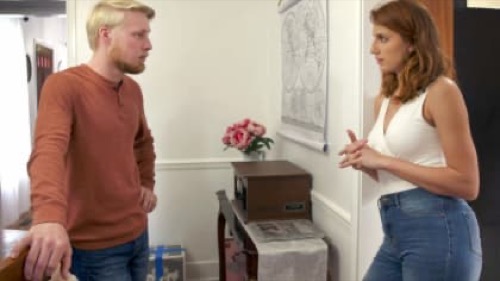 Tonight on TLC their reality show Welcome To Plathville airs with an all-new Tuesday, August 17, 2021, episode, and have your Welcome to Plathville recap below.  On tonight’s Welcome to Plathville season 3 episode 1 called “What’s up Sugar Bum?,” as per the TLC synopsis, “Max recruits Micah and Lydia to help out with a secret surprise for Moriah.

Ethan and Olivia’s relationship is on the rocks; Lydia prays for a family reconciliation with Ethan, and a chance encounter takes her one step closer.”

In tonight’s Welcome to Plathville episode, it’s been six months since the end of last season. At the time, Ethan and his wife Olivia comforted each other by saying they will always have each other and now it seems something happened. The two don’t seem to be happy with just each other. The other family members have gone through changes as well.

Moriah is now in a committed relationship with Max and she’s a different person. She used to be closed off. She knows that he was giving more to the relationship than she was and that’s changed now because she’s allowing herself to be vulnerable with him. The two are doing well. Max is around the house a lot. He gets on well with Micah and the two compete in fitness. Moriah was also incredibly happy.

Max makes her happy. Max was happy, too. Max wanted to announce his intentions with Moriah and so he turned to her brother Micah for help. Max wasn’t saying he was ready to get married. He wasn’t there yet. He was more saying that he wanted to give Moriah a promise ring to show his intentions and he turned to Micah for help because he needed to get Moriah’s ring size without her knowing.

Ethan and Olivia’s relationship and the state of it was also cleared up. Ethan was left angry after he confronted his parents. It woke up things he had buried or used to laugh off and so his wife told him to see a therapist. He was supposed to see one while she was out of town. She tried to ask him about it and he read the text but didn’t respond.

Olivia was therefore worried when she came back. She didn’t know how therapy went or if it just made Ethan angrier. She returned home worried. She went straight home to check on her husband and her husband wasn’t okay. He didn’t get anything from therapy. Whenever Ethan feels stressed or angered, he wants to get out of the situation as fast as possible and that’s how he felt about therapy.

Ethan was angry. He hated that his mother tried to emotionally manipulate him by using his siblings against him and the more he thinks about it the angrier he gets. Ethan and his wife also found themselves striving for different goals. The house they liked had gone to someone else when the seller accepted another offer and so they have to find a new house.

Only they disagree on pretty much everything. Olivia wants a big city and Ethan wants to stick to small towns. She’s open to discussing issues because that’s what she got from therapy and he’s more closed off than ever since his therapy session. They were starting to want different things and that was scary to Olivia because she knew it meant they were growing apart.

The rest of the family seems to have grown closer. Micah and Moriah both felt better after confronting their parents and they went over to the house to celebrate their father’s fifty-third birthday. The siblings even brought along Max. Max told Moriah’s sister about the promise ring. He wanted the ring to fit Moriah’s pinky and so they concocted a story.

They made it seem like they were joking around about pinky rings in order to get Moriah’s pinky ring size. It worked, too. They got the size and the others got a feeling where Max was going. Max was well-liked by everyone. He and Moriah also didn’t hide their feelings. They kissed in front of her parents. They hugged and that wasn’t something Moriah was raised to do until she was married.

Kim and Barry are conservatives. They believe in prayer and living a chaste life and they don’t get along with Ethan’s wife Olivia. They’ve in fact said horrible things about her. They made it so that Olivia doesn’t want to go anywhere near them and so that led to the split from them. Ethan chose his wife over his family. He wishes he could still be in contact with younger siblings but his parents forbid it.

They won’t let him see the younger siblings without them there. They refused to even let the siblings say goodbye to Olivia by themselves and so there’s been no contact between the two sides since. Ethan still sees Micah and Moriah. They were the siblings that stopped living under their parents’ rule although they didn’t act as intermediaries. They didn’t report on Ethan to their parents but they did tell Ethan how his other siblings were faring.

Lydia misses Ethan the most. She was adjusting to adult life and she would have liked to have turned to Ethan for advice. Only he wasn’t there. He wasn’t even there in his own marriage and so Ethan needs to find some way to deal with that anger before it causes the breakdown of his marriage. Lydia meanwhile was coming over to Moriah and Micah’s house a lot. She was slowly leaving the nest.

She goes out for coffee with Moriah and they talk about Moriah’s tattoo. The same tattoo that was welcomed by everyone in the family. Which included their parents. Their parents were releasing the leashes. Lydia went to a job interview and she ran into her oldest brother Ethan. Lydia hadn’t known what to expect so she didn’t go running into his arms.

Only she wanted to.