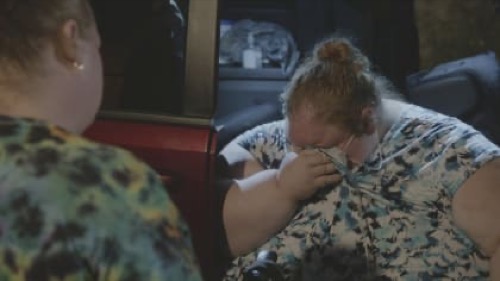 Tonight on TLC their fan-favorite series 1000-lb Sisters airs with an all-new Monday, January 10, 2021, Season 3 Episode 9 and we have your 1000-lb Sisters recap below. On tonight’s 1000-lb Sisters season, 3 episodes 9 called “Smoky Mountain Meltdown”  as per the TLC synopsis, “After a rift on the family vacation, Amy returns home and drops a bomb on Tammy; while Amy focuses on her new life, Tammy makes a decision that takes her even further away from her weight-loss goals.”

The sisters were on a family vacation with their other siblings. Amy and Chris were happy to be there with their other sisters. It was just Tammy that complained. She threw a temper tantrum. She demanded to go home. Chris said he wasn’t driving them back. The six hour trip turned out to be twelve hours long. Chris wasn’t going to make that drive because Tammy was throwing a tantrum and she only began acting up once she learned that she had to walk into the house. The house had ramps. She claimed it was unsafe. The others said it would be fine and she refused to listen. She stayed in the car.

Tammy also yelled at everyone telling her to come inside. All she did was complain and say she wants to go back home. No one was going to take her home, but they were prepared to take her to a hotel nearby and that’s what they had to do. Amy’s husband Michael drove Tammy. Amy also went along. She said its typical that they had to take care of Tammy because no one else could handle her and that usually meant it was Amy that had to take all of Amy’s abuse. Amy was sick of it. She wanted to enjoy the vacation. The family didn’t take them when they were kids because they couldn’t afford it and now they can.

The family wanted to do a family picture the next day. They figured that Tammy would be in a better mood once she stayed in the hotel and so they went to the hotel. The siblings went together. They went there to talk to Tammy and to leave the attitudes out of it, but Tammy being Tammy meant that she started something with her siblings the moment they walked through the door. She demanded to get taken home. They told her that they weren’t going to take her back. Amanda managed to convince a friend to come and collect Tammy and he couldn’t do so until a day before the rest of the family leaves. And so Tammy was stuck.

The siblings went to her hotel together to break the news. They also asked her to come back to the cabin with them and she flipped at that. She refuses to go back to the cabin. She demanded someone drive her home. She also tried to hide her phone and so that’s when her siblings figured out she was talking to Phil. Phil is bad news for Tammy. He’s an ex-boyfriend. He’s dangerous. She got a restraining order against him and now she’s talking to him again. The siblings just couldn’t put up with that crap. They stormed out of there. Amy and Amanda were especially angry. They went ahead with their family photo without Tammy and they had fun.

The family also went to a theme park. It was raining and that plus covid meant the amusement park was mostly empty. The siblings didn’t have to worry about social distancing. They got to go on any rides they wanted without waiting on long lines. Chris even got to go on rollercoasters again. The last one he was on had been too small for him and so he had to take a walk of shame away from the ride without experiencing it, but thankfully he didn’t have to do that this time. He got to go on a ride. He was so happy that said it was the little battles like this that gave him the most satisfaction. Chris has been fighting his weight for so long that any win was worth celebrating.

The family was so happy that they even tried to share it with Tammy. They returned to her hotel. They took their sister out for lunch and they didn’t talk about Phil. They instead showed Tammy photos of their day out together. As a way to include her in it. They just didn’t expect Tammy to snap at them or accuse them of rubbing their good time in her face. Tammy didn’t say it but she was jealous that she couldn’t go with them and she also broke her diet. Tammy and Amy both had a cheat day. Neither of them needed it because they were both struggling with obesity. And so the attitude problem on top of it just pushed Amanda into calling Tammy out on her crap.

Amanda had to walk away from the table before she said something she’ll regret. But Tammy didn’t appreciate it and she just kept saying over and over how she should have stayed home. Tammy claims she wasn’t feeling well and that’s why she wanted to leave but she wanted to leave because slowly she’s been trying to kill herself with either food or toxic relationships. And she doesn’t want her family to get in the way.