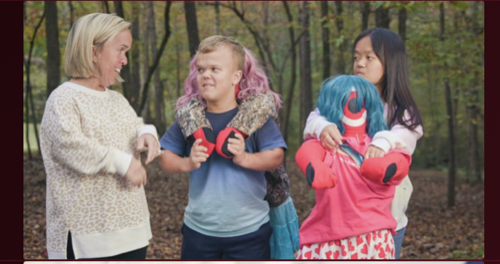 Tonight on TLC America’s largest known little family, 7 Little Johnstons returns with an all-new Tuesday, March 29, 2022, episode and we have your 7 Little Johnstons recap below. On tonight’s 7 Little Johnstons Season 11 Episode 3 “Wife Carrying,” as per the TLC synopsis, “The Johnstons introduce their Finnish foreign exchange student, Joose, to their competitive side with the first-ever Johnston Backyard Games. Then, Trent and Amber celebrate their 23rd wedding anniversary with plumbing, pajamas, and plaster.”

Tonight’s 7 Little Johnstons episode begins with Amber ironing. They have an anniversary coming up, she bought him a bidet because he passes gas a lot. Trent goes into the bathroom to install it. The kids come in to see it and Amber calls it a bump wash. Elizabeth says if she got that for an anniversary present, she would return it and say thanks, but no thanks. Amber says it is going to be a game-changer. Trent goes in to try it and is laughing hysterically. Trent comes out and his pants are soaked, he tells her it is a great present. They have been married twenty-three years.

Trent has a surprise for Amber, he bought them matching pj’s with their picture on them of when they first met, April 28, 1985. He remembers asking her if he could kiss her that night and she said no. She tells him that they were talking about a tradition in Finland that Joose told them about, “Wife Carrying,” these husbands carry their wives over their backs through an obstacle course. They have a great idea, come up with an Olympic game to do with the family in the backyard. Amber thinks they should find a creative name, they come up with “The Johnston Backyard Games.”

Amber tells the kids about the backyard games, they need to prepare. They are going to make t-shirts and dummies for some of the games. The sports they are doing are the orange race, the dizzy server, the caber toss, wife carrying. The dummies are going to be used for the wife carrying, instead of carrying each other. She tells the kids to make sure their dummies look pretty. The wives they created weigh about twenty wives each. Amber asks Joose if he plays games at home, he says no.

Joose jokingly says he likes the wife he made, he is going to marry her. Amber decides to do a hand mold with Trent in silicone for their anniversary. Trent keeps moving and Amber tells him to stop, he is going to ruin it. Once it sets, they have to wiggle their hands out. Then, they pour in plaster of Paris and let it sit overnight.

It’s game day, everyone has their wives ready for the wife race. They piled everything in the vehicles and drive it down to the flat part of the property away from the house. First, Joose plays the national anthem on the trumpet before they start the games. They start with the orange race, everyone has the orange on the ground in front of them, they have to kick it around the perimiter and the first one back to the finish line wins. Joose says this one was an easy game and he wins first place, Trent second and Anna third.

The wife carrying is next, they have to go up and over a picnic table, through a series of hoola hoops inside inner tubes, then zig sag through some holes. Joose falls down with his wife and Emma gets the lead, but she forgets a ring and has to go back, Joose wins. Elizabeth and Trent are next, he wins. Anna vs. Amber, Anna wins. Jonah and Alex are the last two to compete, Alex finds the table challenging, then he falls coming out of the hoola hoop.

Jonah wins. Emma and Amber run again for second and third place, Joose and Jonah took first. Emma gets second, Amber third. It is time for the caber toss, you have a timber, you hold with two hands and you have to through it forward, it has to make one complete flip. Amber and Trent put on kilts to represent Scotland. Anna does great at the caber toss, she wins gold for China that she is representing.

It is time for the last event, the dizzy server. You have to spin around a bat, then pick up a tray of six cups filled with water. Then run to a bucket and empty the water inside. They have to do it until the bucket is full. A lot of laughs and a lot of falling down.

Overall the games were a lot of fun and it was a great experience for Joose.

It is the reveal of the hand plaster, it was a success.