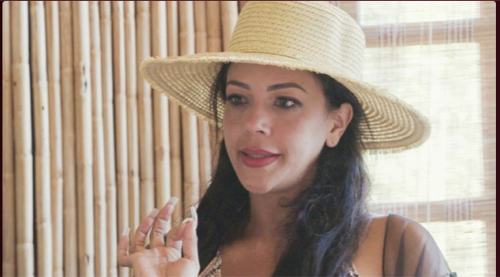 In tonight’s 90 Day Fiance episode, Gino actually tried to lie himself out of the situation. His current girlfriend found out he sent a nude photo of herself to one of his exes and she confronted him. She asked him why he did it. He instead tried to claim he never did it and that the ex was lying. But the ex sent the photo to Jasmine. Jasmine saw the screenshot and so now she knows the truth.

She knows that Gino can’t be trusted. She was just starting to trust him when this happened. Jasmine again asked him why. This time he said he wanted to show her off and was talking about how hot she was only Jasmine knew better than to trust him again. She kept talking to his ex. She found out he laughed about how crazy she was. And he kept in touch with his ex even as she was sleeping beside him.

Jasmine said she could never trust him again. This was probably the end of their relationship and if she had been in her city and not on a shot vacation with him then she would have left right then. Jasmine couldn’t wait to escape Gino. But they were stuck in a room together. Jasmine was untangling herself around the same time that Mike was proposing to Ximena. It wasn’t a surprise when Ximena said “yes”. For all of his faults, Mike was still a decent guy who wants to be good to her and her kids. There weren’t a lot of guys like that around and so Ximena would have been a fool to say “no”.

There was also Ben. Ben arrived to Peru and it was the beginning of the end, really. His girlfriend refused to answer her phone. She didn’t want to meet with him. “Mahogany” might as well be a catfish. It wasn’t the first time that Ben has been catfished. Someone has done this to him before and Ben caught onto it, but things were different now because he got emotionally involved with Mahogany and he wants to marry her. He wants to have a family with her. He didn’t want to even consider that she was a fake. He was that set on her. Ben’s family all thought her pictures were fake and they tried to tell him as much.

Ben ignored them. He kept pursuing Mahogany. He also bought the lie about how she couldn’t meet him because her father didn’t approve and yet this wasn’t the first time that she refused to see him. He once tried to visit Peru much earlier. He had to cancel the trip at the last minute because Mahogany said her parents were out of town and she didn’t want to see him unless she could introduce him to a parents. When she said that, it should have been a clue to Ben. It should have also been a clue when she refused to see him again and he still went down there. Her stop answering her phone or texts was another sign. And all these signs say that she’s not the one.

Not for Ben! Ben was still trying to track her down as Caleb and Alina finally had the talk. She asked him where this relationship was going and he said he needed more time. They may have been Facebook friends for years, but internet friendship doesn’t quite mean the same thing as an actual relationship. Caleb wants to get to know her more before he commits to her. He also doesn’t quite feel ready for exclusivity. He told Alina as much and she took it the wrong way. She began saying he doesn’t love her. He doesn’t want her. Alina also told him that he wasn’t going to sleep in the same bed as her and so he to find a couch.

Another person taking things the wrong way is Hamza. Hamza was told by his fiancé that she wants a prenup and he immediately accused her of thinking of the worst. Memphis had a right to think of a prenup. She has two small children. She couldn’t let some man potentially take food out of their mouths if things didn’t work out and she said as much to Hamza. But Hamza has been feeling some misgivings lately about their relationship. He finds that she speaks quite disrespectfully to him. Its more like a cultural shock to be in a relationship with an American woman than anything else because women from Tunisia would never be as forceful as Memphis is.

Memphis often feels like Hamza is a child she’s responsible for than a partner. She sometimes treats him that way and it is grating. Especially when some of the concerns couldn’t be heard through a translator app. Some of things they say to each other gets lost through translation and often the tone comes out that much harsher. Memphis also doesn’t realize that prenup or no won’t change things once Hamza comes to the United States. She would be automatically responsible for him seeing as she endorsed him for the fiancé visa and the current rules state that she will have to be responsible for him for the next ten years. And that doesn’t change even if they do divorce.

Back in Turkey, Caleb and Alina went out. They did some more sightseeing and that thawed out most of the difficulties. It also made Caleb realize he needed to tell Alina how he’s feeling. He told everyone at the beginning that he didn’t mind Alina was a little person, but he does acknowledge there’s been some problems because of it. Caleb isn’t sure if he commit to someone he felt he has to help all the time and so that was also a part of the reason why he wasn’t ready to jump all in. Which did hurt Alina. This wasn’t the first time that she’s heard her being a little person had caused a problem in their relationship and so while heartbroken – she does get it now.

Alina knows there’s no future for them. She did before in the sense that he needed more time, but once hearing how much he struggles with her being a little person and knowing that there’s nothing she could do to change it has helped clarify where this relationship is going. Its going nowhere. Its going nowhere because if Caleb could get over it, now Alina isn’t so sure. She has heard this all her life and she was rightfully sick of it. Sick of being told how her condition poses problems. Alina doesn’t have a future with Caleb now and its sad. She’s sad. Her friends and family will be angry and maybe she’ll be angry too once the sadness of the situation has left.

Mike later left Colombia. He was now an engaged man with two future stepchildren and he was going to miss everyone. He was especially going to miss Ximena. She was his first real adult relationship and both of them couldn’t wait to get married. There were some tears as Mike was leaving. Ximena said she wishes she could marry him now and go with him, but Mike promised to be back soon and for now that has to be enough. Mike was scared of leaving things too long before the next visit. He doesn’t want either of them to fall out of love or get bored and so he’ll definitely be back soon. And maybe they can get married then.

Ben meanwhile went looking for Mahogany. He went to where she supposedly lived and he told her as much in a text. She responded that San Bartolo is very from Lima. Something that he took as a good sign because she didn’t come out right out and say not to come. Ben told her that he was going to wait at a restaurant for her. He said what time he was going to be there. He said he’d wait all night and so the ball was up to her and its currently unknown or not if she disappointed him. She might have surprised by showing up. Or she never showed and their relationship is officially over as well.

Alina and Caleb later had a heartfelt goodbye because in spite of everything they had been friends before all of this and now that friendship is gone as well as everything else.

Jasmine also ripped into Gino calling him every name under the sun. Her relationship with him is now over too. She also remembered the part where he called her one of his sugar babies. She said if she was looking for a sugar daddy she would have found one better than him.