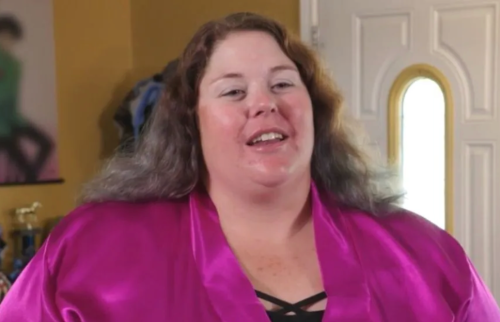 In tonight’s 90 Day Fiance recap, Kim almost fell out with Usman. She was the American that traveled to a foreign country to meet up with the Nigerian Usman. This isn’t Usman’s first time on the show. He’s been on the show before with his ex-wife Lisa. They were technically still married during the filming of this and so you would think he and Kim fell out because of this ongoing marriage. Not because she tried to have sex with him. Usman had turned her down and that’s where all the issues came from. Usman turned her down quite hard. He said he wasn’t in a rush to have that sort of relationship with her. He could barely bring himself to sleep in the same bed as her seeing as she was just a potential girlfriend and so Kim was finally having enough of him.

Kim basically issued an ultimatum the next morning. She said if something didn’t happen on this trip that she didn’t want to be his potential anything anymore. She was going to head back to the United States and cut off all contact with him. Usman, fearing that possibility, ultimately said that sure. They could have sex. He agreed it would happen that night and he knew that would hook Kim. Which it did. Kim was so grateful at the chance that he was finally seeing her as a girlfriend instead of a potential that she took whatever he was willing to give her. And yet how much was him giving into her about them as a relationship or him wanting more monetary stuff from her down the line.

But at least no one had given up on the other. Hamza was just starting to believe that he and Memphis rushed into their relationship. His fiancé wants to get married now. It was their first trip with meeting each other and there was a lot that came up that they hadn’t liked about the other. He lied about his age. She demanded a prenup. She also called him immature and so he thought if I’m that immature then why are we getting married now? Why couldn’t we slow things down. They’ve been talking to each other for about a year and they weren’t really talking talking because there’s a language barrier. And things got lost in translation.

They were currently using a translator app just to communicate. Hamza saw things in Memphis that he didn’t like and he thinks they shouldn’t rush into marriage. It was a wise decision. There was no need to rush into things when they’ve only known each other a year and just met in person. Memphis even said that the sex was lackluster up until a few days ago. Hamza doesn’t think they should rush into marriage and he spoke to his mother about it. She agrees that if there’s concerns that he shouldn’t ignore them. Now, was the time to say something. They should sit down and have a completely honest conversation before they get married.

Mike and Ximena should do the same. Ximena began acting distant the moment Mike flew back to New York and it didn’t help that he was still paying her bills. His family thought he was being used. They thought Ximena was never going to marry him. They all believed she was just using Mike and that he didn’t know better because he had never been in an adult relationship. His last relationship was at fourteen. He was a child then. He has no understanding of what it takes to make a relationship much less sustain one and Ximena was abusing that. Ximena wasn’t interested in Mike. She likes the bad boys. She likes the drugs dealers and the hitmen.

Mike was a volunteer firefighter living with both his dad and grandfather. He takes care of both. He thought Ximena could help him in taking care of them and he failed to realize how selfish she could be. He also didn’t realize it was a warning sign that she began “cooling off” when he returned home. By then, she had already gotten him to propose. He even said he was going to bring her and her two kids to the United States. What he wasn’t going to do was pay for plastic surgery. Ximena asked for money to get a boob job and Mike said no because he thought she was beautiful just the way she is. She also wanted liposuction. And again he turned it down.

Mike didn’t see the need to pay for those things what with him needing to save to support his family. But huge shocker! Mahogany is real. Her photos were heavily photoshopped because the real woman looked nothing like her photos and still Ben didn’t care. He was just glad to finally meet in person. He came to love Mahogany on an emotional as well as spiritual level and so her looks weren’t important to him. They started talking. There was a language barrier. She knew English. Albeit not much. They still talked and it wasn’t as good as it was before. Ben felt he was committed and she was not.

Ben even said “I love you” as he was leaving. Something she didn’t return. She also had the gall to say that he was as muscular as his photos while her photoshopped photos looked like a completely different person. Ben didn’t care, but everyone else who saw photos of her previous self was confused and some on the internet have already claimed TLC hired a lookalike actress to play Mahogany for the show. Like that’s a new conspiracy theory now. Mahogany didn’t seem to care about Ben and so this trip might be it for their relationship. And they were alone in calling things off.

Gino and Jasmine are definitely over. He sent nude pictures of her to his ex because he claims he wanted to show her off and she had to tell him that was a huge violation of trust. Jasmine sent him nudes with the understanding that no one else would see them. She thought Gino was a sweet hardworking man who would never betray her and now she absolutely hates him. She found out that his sweetness was all an act. It’s a good thing that she took birth control on this trip and didn’t listen to him about rushing into having kids because there would be a custody battle on top of everything else after Gino was revealed to be a jerk.

Jasmine better hope that Gino doesn’t release those photos online. He seems the type now and especially after she told him she wouldn’t do the same to him because he has nothing to brag about down there. Jasmine’s form of revenge was to finally take off Gino’s hat. He was mostly bald except for a small patch of hair at the back of his head. It was such an odd patch too. He was literally at the very bottom of his head. Like newborns when their hair is first coming in. Besides that, Jasmine also found out that Gino uses a sugar baby site and that disgusted more than anything else. And she said she will never take him back but that was a lie.

Mike flew down to Colombia to see Ximena and the kids. She was very cold with him. They got off to a rocky start when she failed to meet at the airport and so he had to take a taxi. There was also the fact that Mike walked in dog crap and got in on the carpet when he first came in. But all that aside, Ximena basically told Mike that she hadn’t wanted to see him. It was his idea to fly down there to see her and she felt he sprung it on her. Her body language was saying she was repulsed by seeing him. She was telling friends in front of him that she hadn’t wanted to see him. The love is gone and it probably left once she realized she couldn’t get the plastic surgery she wanted.

Then there’s Johnny. Johnny lives in China. His girlfriend Ella lives in the United States. They’ve been talking online for months and they couldn’t wait to see each other. Only he was afraid about coming to the United States because he was afraid of the coronavirus. To be fair to him, Americans weren’t really taking it seriously. They were more concerned about mask mandates and how that was supposedly infringing upon their rights than they were about a deadly disease that needed to be stopped. Ella and her family and friends weren’t taking the pandemic seriously. They still carried on with their lives and Johnny felt differently.

Johnny felt China handled the pandemic very seriously until they removed practically all signs of it. He therefore felt safer there and he was in no rush to travel. Their original plan was for him to quarantine in Dubai before he came to the United States. He told her he was unsure of the plan and so Ella took it upon herself to book her own ticket to Dubai. She told Johnny about it afterwards. It’s a wait and see if that money spent was worth it.

Jasmine ended up forgiving Gino because she said she loves him too much.

Memphis didn’t take it well when Hamza said they needed to slow things down.

And Ximena basically told Mike that she wasn’t going to give him love until she got her surgeries.