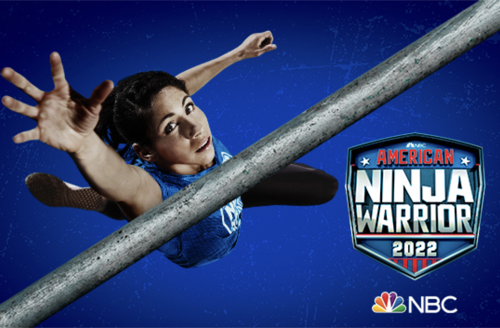 Competitors as young as 15 return to take on seasoned veterans in this first round of competition from the Alamodome. New obstacle Kickboards makes its debut on the course that ends with the iconic Warped Wall.”

In tonight’s American Ninja Warrior it’s been said that what lies before us pales in comparison to what lies inside of us. The show opened with that quote and no other show quite highlights that sentiment as “American Ninja Warrior”. It was night three of the Qualifiers. They were in San Antonio. Olympian Shawn Johnson and her husband were back. It was just overall a great night. There was a new obstacle for the ninjas to face and up first was the “pizza ninja”. His name was Derrick Pavoni. He was one of the amazing Chicago ninjas. They used to have a ninja gym where they trained and also trained new up and comers, but sadly it burned down.

The fire started in the building next to it. It then spread to the gym and took it all out. There was nothing left to save of the old gym. It was especially disheartening for Derrick because he works there. He dedicated his time there with kids. It was all gone and now he has to start over somewhere else. Derrick could have let that wreck him, but he didn’t. He continued his training and he was back this year hoping for another chance at the title. Derrick raced through the first few obstacles. He only started having problems on the fifth obstacle. He fell on that obstacle and he’ll have to wait and see if he made it far enough fast enough to make it into the next round.

Next up Levi Enright. He was twenty-one years old from Cedar Falls and he had boundless energy. He was also recently engaged. He started doing ninja in his teens and he was great friends with another ninja. The two young men were very immature. They even ate out of each other’s mouths and so he still had a lot of growing up to do. But maybe the new fiancé will help with that. Levi was part of a great group of Iowa ninjas. He fell on the Log Runner last time. He took that obstacle again tonight during Split Decision and he went as far as hitting a buzzer on the Major Warped Wall. And so that extra ten grand will be great for the wedding.

There were a few other ninjas during the commercial break. None made it to the buzzer and they too will have to wait and see how many finishers there are before they could celebrate making it into the next round. Next up was Abbey Steffel. She was a ninja mom. Her daughter Molly was born ill. She has undergone several surgeries. She’s also faced bullying that aggravated her alopecia and yet that didn’t stop Molly from participating American Ninja Warrior Juniors. Abbey was there supporting her daughter as she hit the buzzer and now it was the girl’s turn to support mom. And what a run it was.

Abbey got as far as the fourth obstacle when her finger just slipped right off. She’s another one that has to wait and see if she went far enough fast enough to make it into the next round. Next up was Ethan Garsdulski. He was a shy fifteen year from Michigan. He also suffers from anxiety and he took inspiration from Phillip Scott. Phillip Scott was a ninja who openly struggled with his anxiety. Not that he let it stop him from hitting several buzzers. Ethan was a huge fan of Phillip’s. He’s been going to the local ninja gym to help him with his anxiety and its done wonders for him. Ethan showed such skill on the course. He also went on to hit a buzzer no less on his first time out.

Ethan will make it to the next round. He made his family proud and Phillip proud with his success. Hopefully, his story will also encourage more kids to try out ninja. There were more ninjas during the commercial break and Ethan Swanson was one of them. He went on to hit a buzzer, but he wasn’t the last. Jamie Rahn also hit a buzzer. There were also plenty of ninjas that got close to that buzzer. Next up was Gabe Baker. He was a talented musician and he was studying to be an engineer. He made it to Log Run when he fell. After him, there was Ella Sankey. She comes from a big family. She has seven siblings and it could be quite chaotic with so many of them.

Ella spends the most time with the youngest two siblings who both have Down Syndrome. When asked what she was most looking forward to on ANW, Ella said it was seeing her family on the big screen. Ella made it as far as Log Run when she fell. Next up was Kaden Lebsack. He came close to winning a million dollars last year and so he was back to get at another shot at the title. Kaden hadn’t thought he would make it so far last time. He was simply focused on hitting one buzzer at time. He didn’t think of the future then. But it was a different story now. He won a hundred grand last year and he hit a buzzer again tonight. He was the sixth finisher of the night and he had the fastest time.

The only thing that Super K wanted was the banner with his face on it. Next up was Andrew East. He was a former NFL player and he was back with his wife and fellow athlete Shawn Johnson. The Olympian sat with the announcers as her husband had his run. He made it far as the fourth obstacle when he fell. He saved on laundry by taking off his shirt before he did his run. He also convinced his wife to give ninja a try. The couple say they will be back next year. Next up was Drew Nester. He was a medic for the Army Reserves. He was deployed last season and that’s why he missed his run. But he kept up his training. He awaited the day he would get the call again and that’s what happened.

Drew got the call. He came today to show off his ninja side and he got a lucky save after he was able to pull himself up from falling into the water on the balance obstacle. It cost him a lot of energy to save himself. He ran out of steam on the fifth obstacle. Only he still might make it into the next round. Next up was Yari Breunig. She was a fitness instructor and social media influencer. She was also a mother of two. She started ninja training after her second child was born. She highlight her training on social media. She has fans all over the world and now she was ready to live her dream. She made it as far as the fourth obstacle when she fell. And she’s another one that has to await the results.

Next up was KC Boutiette. He was an Olympian. Yet his proudest achievement was his family. He was now a stay at home dad. One of his children has severe disorder in which she was basically deaf, couldn’t walk or feed herself, and every meal had to be blended into a smoothie. KC was tonight’s oldest competitor at fifty-one. He was in great shape. He managed to hold on all the way to the fifth obstacle where he sadly fell. His run was another inspirational moment of history. After KC, there was Chris Behrends. He was another of the famous Iowa ninjas. The Iowa ninjas have dominated tonight what with one of them hitting a buzzer on the Mega Warped Wall.

It was therefore up to Chris to maintain the tradition. Chris sped through the first half of the course with no problem whatsoever. He was aiming for the fastest time and he succeeded by not going after the major Warped Wall. It went after the minor and he gave another noggin buzzer. Guess, those protein shakes really did help those Iowa ninjas with their game. Next up was Jesse “Flex” Labreck. She went on after her other half Chris hit a buzzer and so Jesse wanted to hit a buzzer as well. She and Chris are very competitive. He may have been on the show longer than she has, but she wanted to catch up to his overall total of buzzers. He’s hit ten.

She was aiming for ten. Jesse wanted that buzzer more than anything and she showed a great sense of control as she raced through the obstacle course. She may have taken a few more swings, but she finished like a boss and she hit her tenth buzzer. And so the night ended with Jesse at the top of her game.