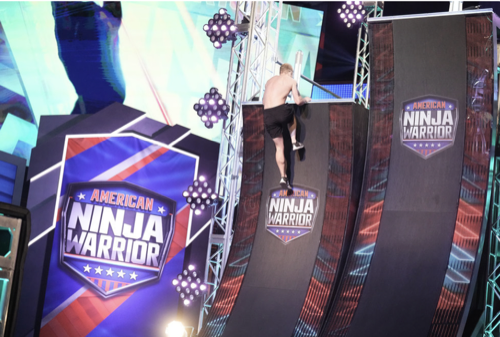 In tonight’s American Ninja Warrior episode, The fourth night of the Qualifiers had a special theme. The theme of tonight’s episode was in hone of the new movie “Minions: The Rise of Gru” and so there were minions everywhere. There was even a new obstacle called the Despicaballs. It was followed by other new obstacles like Shattered Panes as well as the fifth obstacle called Final Frontier. The lucky person who was first to test the new obstacles was fifteen-year-old, Jess Wombles. She was a self-proclaimed adrenaline junkie. She likes extreme sports and can often be found flying planes with her dad. Jess has been training for ANW for the past three years. She, therefore, felt prepared for her run tonight.

Jess started out strong. She became the first to make it past Shattered Panes. She got as far as the Despicaballs when she crash-landed on Kevin. While Jess may have been a fly girl, it was Isiah Thomas who was considered the flyboy. He went next and he was given that nickname because he seemingly sped through every obstacle in his path. He did so again tonight. Isiah had no problems with many of the new obstacles. He was able to conquer them with ease and so his problem didn’t occur until he made it to the Final Frontier. The new obstacle was a galactic-themed obstacle and it was there that the flyboy finally fell.

Isiah will have to wait and see if he made it far enough fast enough. But with his speed, it’s highly likely he’ll make it into the next round. Now, next up was Tristan Wyman. He was twenty-one years old. He was from the North Pole. It’s a real place and it has a small population of people like Tristan. Tristan was proud of where he came from. He came in wearing a Santa’s hat. He had his friends and family wear Christmas colors as well and so it was a Christmas-themed run. Tristan was spreading Christmas cheer all the way to Final Frontier. He sadly fell on the obstacle and like a few others will have to see if he made it into the next round.

Barclay Stockett went next. She was one of the most famous female ninjas around and she was from Texas. Barclay suffered a loss when she lost her mother, but her best friend Tee was there for her and their relationship soon became something more. They started dating. They moved in together. They even got engaged and so now was Barclay’s time to officially come out as a lesbian. It’s Pride Month. There were Supreme Court Justices talking about illegalizing gay marriage and yet Barclay still came out because she was proud of her fiancé and she didn’t want to hide it anymore. And the Sparkly Ninja came to play tonight.

Barclay sped through the course. She chose the Despicaballs and she was one of the few to move past them. She made it all the way to the Final Frontier when she fell. Barclay was told upfront that she was going to make it to the next round and so she celebrated with Tee. Next up was Katie Bone. She’s sixteen. She’s a competitive rock climber. She has type 1 diabetes. She made her run with her insulin pump in one arm and the glucose monitor in the other. Katie also made it further than everyone would imagine. She became the first to beat Final Frontier. She got all the way to the Warped Walls when she chose to go after the Minor. And after failing on the first try, she hit a buzzer on the second.

Katie was the first to hit a buzzer tonight. She was a rookie and she had diabetes and still, she managed to do what seasoned ninjas couldn’t. Katie was the example. The others just had to follow her and up next was Mark Antiquia. He showed up wearing a shark costume. His fiancé was on the sidelines wearing a t-rex costume. They were both avid scuba divers. They also wear those costumes frequently outside. They get some odd looks, but they were a fun couple and Mark the Shark did take it off before he made his run. He sped through the first couple of obstacles. He became the second person to defeat the Final Frontier. And the second person to hit a buzzer tonight.

Mark had found love thanks to ANW. He met his now-fiancé during a Ninja Conference and they dated long-distance and he eventually gave up his job in order to move to her state. Now, they were engaged. He was going to the next round and the future was bright. There were several people who also ran during the commercial break. One of them hit a buzzer. Meaning there was a third buzzer of the night and everyone hoped there would be more. Next up was Gary Weiland. He got sick some years ago. His leg was amputated due to this illness and he didn’t let that stop him from continuing his work as a firefighter.

Gary’s story was inspirational. The fact that he was there doing ninja work was impressive alone and so everyone was rooting for Gary during his run. His son was carrying a sign that said “My dad is an amputee: what superpowers does yours have?”. Gary also showed that his prosthetic was no hindrance in taking on the obstacles. He made it to Log Run where he tripped. He almost fell and it had looked like he saved himself only he went on to fall on that obstacle. Jonathan Godbout went next. He was seventeen. He just graduated from high school and was in a band with his friends. This was sophomore year.

Jonathan was on last season where he hit a buzzer during the Semifinals. He was hoping to go even further with tonight just being the start and unfortunately he fell on the Despiscaballs. His season was officially over after that. What an end for such a promising young man. But next up was Ernesto “Flybird” Perez. He dressed up in a hero costume because he and his friends make videos in which their hero Flybird goes around to stop bullying. Fly bird was naturally a hero to many kids who suffer bullying and watch ANW as a means of escape. Unfortunately, Flybird didn’t make very far tonight. And his run ended much too soon.

Annabella Heinrichs went next. She was a teenager. She loved the ocean in spite of living in Colorado and came to love scuba diving because her father is an underwater filmmaker. Annabella said that scuba diving is a lot like a ninja because with both you have to remain calm at all times. Annabella’s hair was pink. She changes it every month. She was thinking about becoming a hairstylist and was already planning on what she would do with the prize money when she sadly fell on Final Frontier. It just wasn’t Annabella’s time to hit a buzzer, but hopefully, she can do so in the future. And she does have a future on ANW.

Next up was Austin Gray. He was only twenty-five years old and he was already considered a veteran. He was a mentor to the younger kids. He also wore a t-shirt that said: “share your spare”. Austin donated one of his kidneys to a friend of his. He now wears a shirt to help convince others to do the same. Austin’s run tonight was simple. Clean. He raced through the obstacles and he became one of the few people to make it past the Final Frontier. He has a choice between the Warped Walls and he chose to go after the Minor because he wanted the fastest time on the clock. And that’s exactly what he got.

Austin has the fastest time of the night. It was up to the people after him to try and beat that time. Next up Isaiah Wakeham had his run. He hit a buzzer on the Minor Warped Wall. Then he was followed by his sister Isabella. Isabella has been competing with her brother from the very beginning. They always try to top the other. Isabella wanted a buzzer too and so she pushed herself. She held nothing back as she was tackling the obstacles. Isabella made it as far as the Final Frontier when she fell. She did make it far enough fast enough and so she will still be in the next round with her brother.

At this point, seven women had made it into the next round. Her story has been made and the night ended with Nate Hansen. He was born with a growth deficiency. He was one of the shortest ninjas on the scene. Yet, he didn’t let that stop him from accomplishing so much. Nate was a great ninja and he inspired younger ninjas to go after the sport no matter their size. Nate went fast. Even faster than Austin. Nate just flew through the course and he didn’t hesitate to go after the Minor Warped Wall. And so that helped in him getting the fastest time tonight.

And what a night it was!