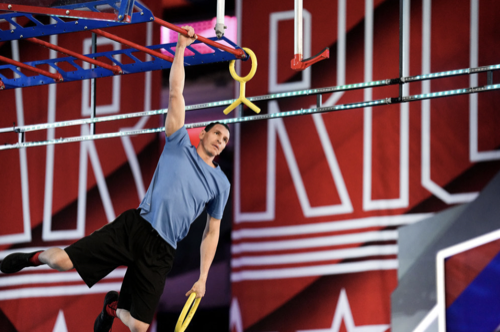 American Ninja Warrior has become a global phenomenon. It has programs in twenty-six countries all across the world and some of those contestants even came out to ANW to compete tonight. Costin Becheanu was up first. He was originally from Romania. The home of Dracula and so he wore the Dracula costume for his run tonight. He also said that if he ran out of steam that he could just turn himself into a bat to fly through the course. But sadly the bat powers didn’t come in handy on Shattered Panes. Costin slipped on the second obstacle. And that was it for him for the rest of the season.

Jeremiah Boyd went next. Now, here was a kid who was first introduced to ANW Juniors. He’s from Minnesota. He competed back then and he quickly won a following. Jeremiah has since started filming his workouts at a ninja gym. He films himself going backwards over the Warped Wall. He also showed that he had no problem with the Mega Wall. Jeremiah showed that he was ready to take on the adult league and he proved that tonight as he raced through the obstacle course. Ending with him going up the Mega Warped Wall to win ten thousand dollars. Jeremiah was proud to have hit a buzzer his first time out. And the hosts were happy to tell him he’ll be going to LA.

Next up was Heidi Jorgensen. She was from Utah. She was making her run tonight in honor of her best friend who suffered a condition that affects both her movements as well as her speech. But Julia never let that stop her from working out with Heidi at a local ninja gym. Heidi has been training for months. She also had a background in gymnastics. Both of these things came in handy as she was making her way through the obstacle course. She made it all the way to the Final Frontier when she fell. She will have to wait and see if she made it into the next round. And so she wouldn’t know until the end of the episode.

There were some other ninjas who had their run during the commercial break. None made it as far as to the Warped Wall and so they too will have to wait and see. Next up was Chris O’Connell. He was born with a congenital heart defect. He required surgery in his twenties to fix it. At the time, his wife had been eight months pregnant. Their son was later born with the same illness. He too required heart surgery. The little boy also needed to cover his ears during his father’s run because he was sensitive to loud noises. His father on the other hand did his best to show his son that there was no reason to slow down. Even if they did go through heart surgery.

Chris made it to the fourth obstacle. Depending on how many finishers there are, there’s still a chance he might be going to LA. Next up was Lance Pekus. The Cowboy Ninja was a hardcore veteran of the show. He always does well. He also always invites people to come visit him in Idaho. No one until Elijah came out to see him. The teenager was a ninja himself and he was interested in learning from the Cowboy Ninja. Both men trained on Lance’s personal ninja gym. They also both wanted a buzzer tonight. Lance had a smooth ride on the course up until he went against Final Frontier. And that’s the obstacle that took him out.

Next up was Lance’s protégé, Elijah. Elijah Browning was nicknamed “the Boss”. They call him that because he was a true entrepreneur and he owns and operates several businesses at just seventeen years of age. Elijah showed great speed during his rookie year last season. He was now a sophomore and again he did train with Lance. Elijah took cues from Lance on the sidelines. He figured out what worked for him. What didn’t. He made it passed the fifth obstacle and he was hoping to hit a buzzer on the Mega Warped Wall but he missed it by a couple of inches. He ended up hitting his buzzer on the original Warped Wall.

Liba Yoffe went next. She was an orthodox Jewish woman and mother. Her faith was very strong for her. She eats Kosher. She doesn’t against her Sabbath. She also raises her kids in the faith. Liba was quite short for a ninja. She didn’t last long on the course, but she showed many women of her faith what was possible tonight. After her run, there was Chris Staples. He was taller than six feet and was once a baller. He also went on to fall on the second obstacle just like Liba. Proving that size doesn’t matter to these obstacles. Its all about technique. And after them, there was Isiah Waghiyi who came from a remote island off of Alaska.

It was winter nine months out of the year there. There was a small native population who live off of the land and sea. There was no supermarkets or stores. Isiah only found out about ANW because he watched the show. He watched and dreamed of being on the show one day. Now, he was living his dream. He took five plane rides and traveled hundreds of miles to her tonight. But he made it. He went on the course and he gave it his all. He made it all the way to the fourth obstacle when he fell. Isiah will most likely not be going on to the next round. Not that he let that stop him from celebrating with a native dance of his home.

Next up was Brittney Durant. She was into extreme sports. It was such a passion of hers that she actually hosted a show about it and she’s been doing ANW for a while. The veteran was able to sail through the obstacle course. She made it all the way to the Warped Wall. She failed on her first try, but she made it on her second. This was her first buzzer since the show. Brittney couldn’t wait to hit another buzzer. But after Brittney, there were several other ninjas who tried to go after that buzzer. Most failed at doing so. There was a winner here and there. It just wasn’t enough to change the overall list of finishers.

David Funk went next. He was a Las Vegas entertainer. He was adopted. He was originally from San Antonio. He grew up thinking his birth family didn’t want him until he took one of those ancestry tests and it put him in touch with his aunt. His aunt helped him contact his birth sisters. His sisters have been looking for him for years. They couldn’t wait to meet him and so David found out that he was wanted after all. He now has an extended family with his birth relatives. He also has a family with his wife. Most of his family was watching him from a screen. His birth sisters on the other hand were there on the sidelines rooting for him. And he made it to the Final Frontier where he fell on the dismount.

Mady Howard went after David. She took off last season to have her baby. But she didn’t let that stop her from training. She’s been training for months and she even incorporates her son in some of the training. He thought it was all fun. He would giggle if she looks him while she was doing her jumps. Her son’s name is Beckham. He and his dad were watching Mady’s run from the sidelines and at one point he started crying. It was very hard for Mady to ignore her mom’s heart to focus on the course. She made it all the way to the fifth obstacle where she fell and luckily she made it far enough fast enough to make it into the next round.

Next up John Mack. He was nicknamed “the Reach” because he was so tall. He was actually the tallest ninja tonight at 6’5. His wingspan could probably even help him to fly and yet John didn’t make jokes tonight. He instead talked about his dad. He dedicated his run tonight to his dad. He lost his dad at thirteen around the same time that he suffered two injuries to the head and so it was a miracle that he was able to do ANW at all much less so well. John sped through the obstacle course with the fastest time. And he managed to hit a buzzer on the Mega Warped Wall which won him ten thousand dollars.

Jackson Erdos went last. He was the youngest competitor tonight. He was on American Ninja Warrior Juniors last season and now he was finally on the adult version. He was known for his speed before, but he took his time tonight and it worked for him. He also tried going after the Mega Warped Wall and he failed at it. But he did hit a buzzer on the regular Warped Wall. And that was it for the night.