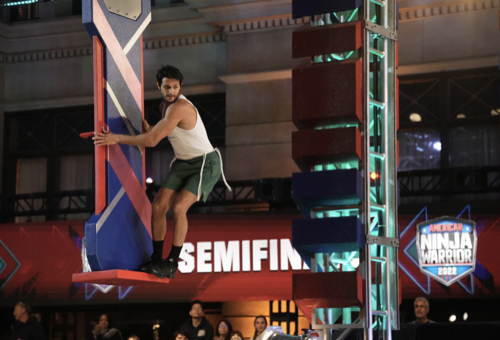 In tonight’s American Ninja Warrior episode, it was night two of the Semifinals! Ninjas all across the world came to compete. They were in Hollywood tonight and the stage was built on a movie production set. Up first was Jonah Bonner. He rows gondolas in California. He even throws in some singing and he wasn’t too bad at it. When he was doing that, he was into BMX riding. He loves the adrenaline. He loves the rush. ANW was therefore made for him. Jonah had the most supporters in the crowd because his whole family came out to cheer for him. The obstacle course was twice as long as the Qualifiers. There were also new obstacles to face.

Jonah may have been first on the course, but he showed everyone how it’s done as he raced through the course. He may through the first half with no problem. It was the second half that stumped him. Everyone could see how tired he was getting on the course. It didn’t come as a surprise when he made it to the newest obstacle Box Office that he fell. He just ran out of juice by that point. Up next was Mike Beadle. He warmed up before his run by playing pattycake with his daughter Lindsay. It just wasn’t enough to protect him when he came across Hopscotch. Hopscotch was in the first half of the course.

Mike falling on that obstacle meant he wasn’t going to make it into the next round. Only, no one could have saved him from that obstacle and he did end up falling. Mike was out. There was more to come. There was a commercial break in which several ninjas had their run. None made it as far as Jonah to the second half of the course. Next up was Izabella Adkins. She was nineteen. She was considered to be a superfan because she’s never missed an episode of the hit show. She was also into extreme sports. Her father served as her biggest inspiration because he suffered a traumatic brain injury at her age. And he never let that stop him from achieving everything he sets out to do.

Izabella wanted to be the same. She qualified during the Qualifiers. She made it far as the Warped Wall when she failed to make it up there all three times and was unfortunately eliminated. It was still a good showing from a rookie. She also might still be going to Las Vegas because of tonight’s showing. Next up was Josh Levin. He was a top ninja. He helped designed new obstacles for ninjas with disabilities. He just got his Master’s from Harvard in Engineering. He actually had to miss the past few seasons because he was at school and so he was back tonight with a vengeance. He made it through Hopscotch.

Josh made it through the other newest obstacle, Box Office. Josh made it to Split Decision where he chose Dragonback because he thought it looked easier and that’s the obstacle he fell on. Josh was hoping for a buzzer, but he still put on a great show and he will most likely be going to Las Vegas. Next up was Jeremiah Boyd. He was a jokester. He was a teenager. He loved to have fun and that’s what he did on the obstacle course. When he wasn’t on the course, he was just doing teen stuff. Helping around the house. Doing his chores. His mother only let up during his ninja training or when it was the course itself.

Jeremiah made it to the second half of the course. It made it as far as to Box Office when he fell. He will have to wait and see only there’s a chance he’ll still make it to Vegas. Next up was Evan Andrews. He was seventeen. He was from Montana. He was from Big Sky country and their nature served as his obstacle course. Evan took everything he learned back home to the course. Montana must be a great place to ninja train because Evan had no problem on the course. He tackled it all like it was nothing. He even made it past Dragonback to go on to hit the first buzzer of the night. Evan is going to Vegas. But who else will join him?

Next up was Lance Pekus. The Cowboy Ninja was a fan favorite. He recently met up with a woman who he donated his bone marrow to. This poor woman had leukemia. She would have died if Lance hadn’t proved to be a miracle match. She was very grateful. He was her hero. He was a hero to many in the Ninja World. He made it as far as Hopscotch when he fell. It was a shocking fall. The experienced ninja would normally have hit a buzzer during the Semifinals. But he didn’t do that tonight. Next up was Mady Howard. She’s been a top competitor since her first competition several years back.

Only things were different this season. Mady was coming back after having had a baby and so she’s incorporated her son into her training. She’s had in order to be both ninja and mom. It was especially hard when her son started to cry when she was on the course during the Qualifiers. Her little mom’s heart wanted to do everything she could to cheer him except she couldn’t do that on the course. Mady tried to do her best tonight. She made it as far as to the balance obstacle when she went first into the mat on the sidelines instead of into the water. She was eliminated and it was quickly onto the next one.

Asaf Goren. He was a Reality star in Israel. He’s been on everything from “Big Brother” to “So You Think You Can Dance”. He even won his season of “Israel Ninja Warrior”. Asaf was now ready to tackle the American version and he was doing well until he got to Clockwork where he fell and that was it for him. He won’t be joining the others in Vegas. Next up was Josiah Singleton. He was from Lynchburg, Virginia. There really was a place with that name. He was the true Country boy. The Country Boy Ninja. Josiah didn’t have a practice course in his hometown. He instead used the mountains and nature to fine-tune his methods.

Josiah made it as far as Dragonback when his arms gave out. When asked if he would have changed his mind in Split Decision, Josiah said he wouldn’t do anything differently. Next up was Tiana Webberly. She was best known as Sweet T. She’s had problems with Clockwork in the past and she still tried to pull it off tonight only she couldn’t. She fell on literally the same obstacle as before. Clockwork is just her downfall. After Tiana was eliminated, it was Kyle Soderman’s turn. He uses his skill for more than just Ninja. He also loves to play World Chase Tag. It was a great way for him to stay fit during the off-season.

Kyle was also great with speed. He picked up from playing tag and he was aiming for the Power Tower tonight. He sailed through he first half of the course. But he fell on Box Office. Kyle was still going to make it to Vegas only falling as he did probably stung. Next up Sean Bryan. The Papal Ninja was tackling Hopscotch when the show picked up after a commercial break. Sean had had to watch several of his friends get tripped up on the course and he tried to learn from them. But he too crashed. He fell on Box Office. He still had a chance at the Power Tower only he had to wait and see how the last person who had their run did.

The last person who had their run was Elijah Browning. He was known as “The Boss”. He was a teenage entrepreneur who ran several businesses and he was missing out on his first year of college because he wanted to run his business full-time for a year. Elijah made it as far as Hopscotch when he shockingly fell. A lot of great ninjas fell on that obstacle. There was only one finisher the whole night. Evan Andrews raced off against Josiah Singleton in the Power Tower. Both of them were newbies on the Power Tower. They had never done it before. But when their moment came, they raced to the death with only one victor.

The victor of tonight’s Power Tower was Josiah. He won the Safety Pass.