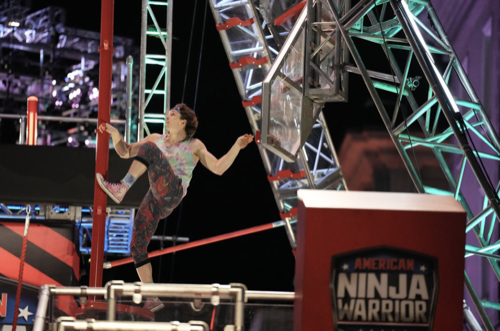 On tonight’s American Ninja Warrior, its night three of the Semifinals! There was only one finisher last week. Everyone was hoping for better results tonight and up first to test their resolve was Mike Silenzi. He was better known as “the Stallion”. His friends were all pretending to ride a horse on the sidelines in honor of that nickname. Mike was one of the strong ninjas to come from the Chicago area. Chicago ninjas are always fierce on the show. Tonight wasn’t any different. Mike was the first to try out the new obstacle course and he showed no problems with Hopscotch. An obstacle took out elite ninjas during night two.

Mike giddy up on the wall. He made it to the second half. He managed to survive Box Office. Another obstacle that took out several great ninjas and so Mike was on great form tonight. He’s been doing this for ten years. He more made a name for himself in the last two years. Yet, Silenzi was such a fierce competitor that he set the tone for the night three by being the first to make it to the buzzer. Mike did a great job. He also showed the other ninjas how to do it and so it was a wait and see on how many followed his example. There were several ninjas who tried their best during the commercial break. None made it as far as Mike.

The show picked back up with Megan Rowe. She was the axe-throwing ninja. Megan has recently moved to Colorado with her boyfriend. They get to go rock climbing as well many other outdoor sports there. It helped her train for ANW. It just wasn’t enough for Hopscotch. Megan made it to the fifth obstacle where she failed to grip the obstacle with both hands. It resulted in her falling. She now has to wait to see if she made it far enough fast enough to make it into he next round. Next up was Drew Nester. Nester was an army medic. He was doing flips on the course. He was having fun and he made it all the way to Split Decision where he picked Diving Boards.

Something that proved to be a mistake because that’s where Drew fell. Drew still made it pretty far and so he will be joining Mike in the next round. Next up was Nathan Greene. Nathan was a fierce competitor who always try out the course with about the same time as his twin brother Marquise. Only his twin didn’t make it into the Semifinals this year. Marquise had to shave his head as part of losing a bet he had going with Nathan and Nathan was given the “Best Twin” trophy. Something he brought with him tonight. Nathan was proud of his trophy. He was hoping to get another one at the end of all this. And he made it far as the Box Office when he ran out of gas.

Next up Derrick Pavoni. He had actually started his run during the commercial break and the showed picked back up while he was on Hopscotch. Derrick was unfortunately known for never making it past the fifth obstacle. But he was able to do so tonight. He made it to the ninth obstacle where he chose Flipped Around. He was almost off it when he fell too. It was perhaps his best run ever and it guaranteed him a spot in the next round. After Derrick, there was Roo Yori. He was known for a dog adoption t-shirt he wears. He tries to encourage people to adopt dogs from the animal shelter. And it was Roo’s worst night on the course because he fell on Clockwork.

Kaden Lebsack went next. He was a teenager yet he was also legendary on ANW. Kaden made it as far as the last round and he almost won a million dollars he was that close. Last year just wasn’t his year. Kaden was hoping for something better this year and he was known for never falling. Kaden made it past Hopscotch. He made it past Box Office. He chose Flipped Around in Split Decision. He even made it past that obstacle as well. Kaden showed no sophomore slump as he made it all the buzzer and became the second finisher of the night. He did an amazing job. He has his best friend cheering for him. And his parents were there to support him as always.

Kaden did great on the obstacle course. He made it all look easy. Unfortunately, no one else had it as easy as him when they had their run. There were several ninjas who fell during the commercial break. Ethan Swanson was one of them. He made it as far as Diving Boards after choosing that in Split Decision when he fell. He still made it pretty far. He’s getting into the next round, but he lost out on being the third finisher. Next up was Jackson Twait. He was one of the hardcore ninjas from Iowa. They claim being corn-fed made them so great and while they were all super talented. Jackson has shown some inconsistencies in the past.

Jackson was having a great season so far this year by hitting a buzzer in the Qualifiers. He was known as the cat daddy and he might even have gotten a new name after he pulled off a miraculous save on the Diving Boards. He almost fell. He instead flattened himself. He was able to get back up on the board and to continue with his run and he went on to become a third finisher of the night. Something that wasn’t a sure thing because again he’s inconsistent. Only Jackson finished with the fastest time. He managed to beat out Kaden’s time. So, maybe the Diving Boards was better than Flipped Around.

Next up was Karen Potts. She was sixteen. She was a star athlete on her high school’s girls softball team. She was known for being a fast ninja and she showed that speed as she did her best to race through the course. Karen was the first female competitor of the night to make it past Hopscotch. Karen made it all the way to Box Office when she fell. After Karen, there was Jamie Rahn. He was the favorite superhero. He’s been trying to have a baby with his wife. They’ve been trying for three years. They were even doing IVF because the chances of them getting pregnant naturally was only at two percent.

The couple had ultimately made the decision to stop trying for a baby because it was getting to them. But not long after they stopped IVF, they got pregnant with their miracle baby. They found out after his wife injured his toe and they had to go the emergency room. It was policy to run a pregnancy test on every woman who requires surgery. The test came back that she was pregnant and now they were preparing for baby. It would be great if they had an additional million dollars from ANW to put towards a college fund. Jamie made it all the way to Flipped Around when he fell. And so maybe next time he won’t choose the fun option.

Next up was RJ Roman. He was known as the Rocker. He keeps it all rock all the time and there were times he almost fell several times on the obstacle course only he became the fifth finisher of the night. He finished with the second fastest time. He was in the running for the Power Tower again. Only there were still more ninjas to run the obstacle course. Next up was Jesse Labreck. She was known as Flex Labreack. She was an elite competitor. She always makes it through these lower rounds and yet she had a shocking fall tonight. She fell on Clockwork. She was out for the rest of the season and this was the first time that she was going to miss racing in Vegas.

After Jesse fell, her fiancé Chris Digangi went on to fall. He fell on Hopscotch. He too will miss out on Vegas and so that’s that for the couple. Next up was Levi Enright. He was one of the Iowan ninjas. He had an easier time than even Kaden. He raced through the course. He came towards the end with the fastest time possible and it was him and Jackson in the race up the Power Tower. Both of them were from Iowa. They both ate some corn before the final race. As for the race itself, it was neck and neck until Levi pulled off a win by mere seconds.