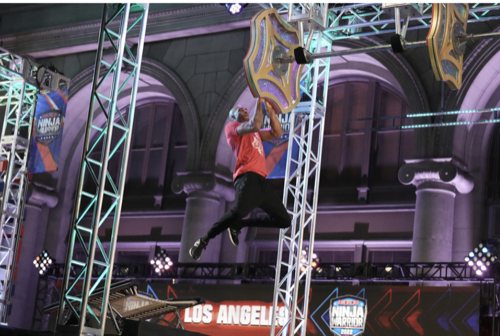 In tonight’s American Ninja Warrior episode, it was night four of the Semifinals. They were all in LA. The first ninja to run the obstacle course was Katie Boone. She was an amazing ninja. She was also a Type 1 diabetic. She’s been fighting her disorder for years and yet she never let that stop her from accomplishing her dream. She was asked once as a kid what her dream was. She said to compete in the Olympics and to one day be on ANW. She accomplishes her dream by being on ANW. It was now only the Olympics left. Another NBC show. But first Katie had the obstacle course tonight. She steadily made her way through the first couple of obstacles.

Katie even took her time where she needed to. She was the first to make it past Kaleidoscope. She was the first to go over the wall into the second half of the course. Katie made it all the way to the other newest obstacle called Ghost Town when she fell. It had been a great run for a sixteen-year-old. It also might be enough to get to Vegas. She’ll have to wait and see how she compares with later ninjas. Next up was Ethan Bartnicki. He was seventeen. He was also a music producer. He’s apparently been producing music since he was twelve and he credits music and ANW for helping him overcome the difficulties of being a biracial adopted kid.

Ethan said music and ANW had one thing in common. It was timing. Ethan was on ANW Juniors season one. He’s also a familiar face at his local ninja gym and so this course seemed built for him. He sped through the course. He was the second person to make it to the back half of the course. He chose Flipped Around in Split Decision. He was a little too light for that obstacle. He tried to lock it into position but couldn’t because he didn’t have enough weight to push the board and so he eventually fell on the obstacle because he didn’t know he was too light for it. He could have survived if he had only just chosen Diving Boards.

Next up was Christopher Harding Jones. He wore a t-shirt with the words “Living Wild” on it. It had been a personal motto for his father before his father passed. It was something his father said after he was diagnosed with Stage 4 cancer. It was also now an inspiration for Christopher after he was diagnosed with a sensory disorder that made him very clumsy in life because he struggles with dimensions in terms of himself. Not that Christopher stopped him from pursuing ANW. He first turned towards the sport after his dad got sick. It was now something he does because he loves doing it. He loves combating his disease by being great at this sport.

Christopher showed no hesitation when it came to the course tonight. He raced through it and he was the first to make it past Split Decision. He was the first to hit a buzzer tonight. There were some ninjas during a commercial break here and there although none made it as far as Christopher did. Christopher was the first to the buzzer. James McGrath went next. He was known as “the Beast”. He was a ninja veteran. He auditioned way back in season two and he was doing well until a shoulder injury forced him out of the game for a while. He was back now. He was coming off a win on the Mega Warped Wall. And he even proposed to his longtime girlfriend, Alyssa Beird.

She was a fellow ninja. She was on the sidelines last time, but she couldn’t be there tonight and it turns out she was his good luck charm. James ended up falling on Kaleidoscope. Odds are he won’t make it to Vegas and so this was it for him for the season. Next up is Donovan Metoyer. He was another veteran. He was known as the Classy Ninja because he always makes his run in a three-piece suit. He was back with another sharp suit tonight. He was also usually known for a 360 turn up the Warped Wall. He just didn’t do one tonight because he was focused on the buzzer at the end. He was the third person to reach Split Decision.

Donovan chose Diving Boards. He fell on that obstacle last time. He went on to fall on them again this time. Those boards just were the end of him and next, he’ll choose differently. But Donovan did secure his place in Vegas with his run. He’ll be going onto the next round and up next was Nate Hansen. He was one of the shortest ninjas in the league. He was also a very impressive ninja veteran. He’s never let his height stop him from hitting that buzzer. He’s been the underdog in most of what he does. He doesn’t let that stop him and joining him tonight was his family. It was the first time they got to be there to watch him from the sidelines.

Nate was the oldest of five boys. He has two biological brothers and two adopted brothers. Still, they all looked alike. Even his parents looked alike. They were all there cheering for Nate as he made his way through the course. He made it past Split Decision. He went on to hit a buzzer. He was the second finisher of the night. He was in the running for the Power Tower. Next up was Isabella Wakeham. She was one of the top female rookies last season. She was back in her sophomore year. Her brother and fellow ninja had his run during the commercial break and he suffered a shocking fall on Kaleidoscope.

Isabella tends to fall on the same obstacle as her brother. It, therefore, wasn’t surprised when she went on to fall on Kaleidoscope as well. The siblings were that much alike. Next up is Isiah Thomas. He was known as “the Flyboy”. He was known for speed during his rookie year last season. Things were a little different this year. His cousins came to live with him and his mom last season. He tutors them in school. He also mentors them in ninja training. Isiah was used to training seven days a week. He’s had to cut down on that as he helps his cousins. His cousins have been through a time as it is that Isiah didn’t want to hurt them or shortchange them during his time with them.

Isiah lived up to his own legend by speeding through the course tonight. He was one of the rare few to make it past Split Decision. He went on to become another rarity for the night. A finisher. He hit that buzzer at the end with the second fastest time and that was good enough for the Flyboy. Next up was Barclay Stockett. She was a ninja veteran. She’s had a rough few years what with losing her mother and there to help her through it all was her fiancé Tee. The two women realized they were in love back in 2019. They kept it mostly a secret from the ninja world until this season because they were afraid of what said world would say about it.

Yet, the two women have gotten nothing but support from the ninja world as well as the world at large. Everyone was so happy for Barclay. They were glad she was happy. They were glad she found someone to love and they were rooting for her this season. Barclay seemed happier than she’s ever been. She was running through the obstacles like nothing when she came to Kaleidoscope. This was the obstacle that proved her undoing. She ended up falling on the last leg of that obstacle and still she wasn’t sad about falling. She had secured her place in Vegas. She was back to being the Sparkly Ninja and no one can take that away from her.

Austin Gray went next. He’s been training with his fellow ninja and roommate Nate Hansen. Nate usually came first in the competition. Austin typically came second. But he was hoping to change that this year. He wanted to be on a banner. He also didn’t want to share banner space with Nate and so he sped through the course. He chose the fastest instead of the safest options. He went to become a finisher with the fastest time. He was him against his friend Nate in the Power Tower. They both wanted that Safety Pass, but only one could walk away with it. It was a race to the final buzzer tonight and the winner was Nate.

Nate was slower than Austin only he didn’t make the mistake of falling like Austin and so he was going to rub it in Austin’s face so bad.