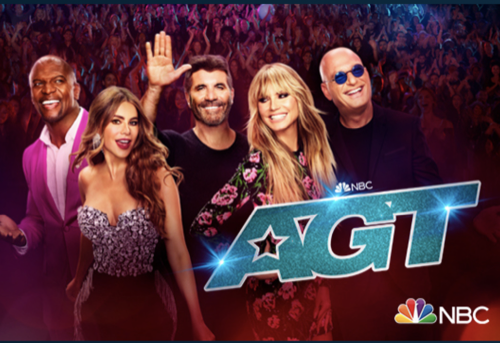 In the season premiere, variety acts featuring contestants of all ages audition for the chance to win the $1 million prize. The Golden Buzzer is back, allowing a lucky act the chance to go directly to the live shows to compete for America’s vote.”

The first act up tonight representing Chicago in the best way is The Pack Drumline. They are there to represent their city, their loved ones, and themselves. They are not just drummers, they are dancers.

Judges Comments: Howie: ”I feel your hearts, you are not just beating on your drums, your hearts are pounding all over this room, I love you.” Simon: “People ask me what is the best part of this job, it is moments like this, the show is about this and you are going to make a difference.” Heidi: “that was sexy, I could see Sofia jiggling under the table. You mixed music of today with your drums, great performance.” Sofia: “You guys are already an amazing show, I think you are going to do well in this competition.”

Four yes votes, they make it through.

Next up is an all-girls group, XMOG Pop. They are an all girl group created by Jojo Siwa and Jessalyn Siwa. They are singing an original song, “Candy Hearts.”

Judges Comments: Howie: “I have a granddaughter who is seven years and this is what she would want to see. You should have your own show and be touring. I think that is exactly what you are going to do.” Simon: “I didn’t like it, I loved it. Your energy, your enthusiasm, it was like a mini explosion.” Heidi: “I remember when Jojo was your age, everyone was on point and everyone is special.” Sofia: “That was so much fun, every little girl in America is going to go crazy when they see you”

Four yes votes, they make it through.

Next is Mervant Vera who combines rap and magic.

Judges Comments: Howie: “That was honestly incredible. Why haven’t you auditioned before, it was so slick.” Simon: “That was amazing, the best things are worth waiting for.” Heidi: “I had the best time watching you, fantastic.” Sofia: “That was a first for me, how can you even do this?”

With four yes votes, he makes it through.

Lee Collinson is 21 and he is from England. His dream is to just make music, he wants to quit his day job, he is a fencer, and he puts up fences. He will be singing, “Better Days,” by Dermot Kennedy.

Judges Comments: Howie: “People don’t understand at home the pressure to stand on that stage, and to be in America for the first time and raise the roof is truly amazing, great job.” Simon: “You probably don’t know how good you are, this is the start of something special for you.” Heidi: “I think it was worth the 14-hour plane ride, you have stage presence, you killed it.” Sofia: “The moment you started talking I loved it and I was hoping you had a great voice too, it was amazing.”

Simon makes Lee call his mother on Facetime, Howie says hi and calls himself an American sex symbol. It is four yes vot4es from the judges, Lee is going through to the next round.

Up next are some disaster acts that don’t make it through:

David Litchtman is from Sacramento, California and he brings Pepino the pony with him. Pepino is not impressed with being on stage and walks away.

Joe from Austria is there to dedicate a song to his wife, he sings “Eternal Flame” and sets himself on fire. He gets four X from the judges and Sofia says his wife is not going to like it. Terry says it is a bad BBQ.

A goat act that has non-cooperating goats, but Sofia and Heidi nab two for cuddles.

Jack Grady is a magician from Ohio and he is magic trick is putting a bottom on his butt.

Ben Lapidus is a singer-songwriter, he has been doing it since he was 14. He is going to sing an original song. Simon hits the X, and so does Howie, then Sofia, then Heidi. Simon says it was disgusting, he didn’t like the song. Sofia doesn’t know what is happening. The crowd love it, and so did Terry and Heidi even though she hit the X. Ben even plays an encore. The song is called “parmesan.” Simon says he wants to kill him because he can’t get “parmesan” out of his way, he takes the X away and gives him a yes, and so does Heidi. Howie says no, it is up to Sofia. She gives him a yes. The crowd is going crazy. Sofia tells the other judges they are cray, it was insane.

Celia is 36 years old from Spain, she flew in to do the show. She used to be an opera singer, and now she is a ventriloquist. She has learned it in 2 years, it usually takes 20. She flosses, and brushes her teeth, while she gins. She even drinks water!

With four yes votes she makes it to the next round. Terry tells her she can be the next Terry Fator, the AGT winner.

Veronique is from Oxford, Florida and she is on stage with her dogs. She lives on a farm and she is twelve. Her act is so good she even skips rope with one of the dogs. Two of the dogs ride scooters and there is a quick change dog. Her act gets a standing ovation.

Judges Comments: Howie: “Not only did you dazzle us, but you are also a great performer.” Simon: “It was everything, they are so smart.” Heidi: “You are adorable, I loved the quick change and how they were dancing together, it was very well done.” Sofia: “I am in shock, it was so amazing, so beautiful. The quick-change, wow.”

Four yes votes from the judges get Veronique and her dogs through to the next round.

Judges Comments: Howie: “Everything you say is memorable, authentic, your smile, you are great.” Simon: “You have a real star quality about you. The audience loved you.” Heidi: “I loved it. You are fantastic and your face is so cute.” Sofia: “I loved it, your energy, your smile.”

With four yes votes from the judges, he is going through.

Shu Takada is from Japan and he does extreme yo-yo, he is 35 years old. Simon says the acts they have done that have done yo-yo are boring. Shu says he wants to have his own show.

Judges Comments: Howie: “Usually yo-yo is nerdy but you made it cool and fun, you are a great performer and a dancer.” Simon: “My God Shu we were not expecting that. You got personality, you do some incredible. I love acts like this.” Heidi: “The best yo-yo act we have ever seen.” Sofia: “The moment you started, you lightened up, you are cool and deserve to be here.”

Four “Yo” votes from the judges, Shu is going through.

Avery Dixon is from Atlanta, Georgia, he is 21 years old and he plays the saxophone. He says he is bullied at school and called “hammerhead.” He was in such a dark place he wanted to commit suicide. The saxophone took him away from all that. He says he tries to practice but people call the cops on him because he is loud. Simon tells him that he can be as loud as he likes. A standing ovation from the crowd and the judges.

Judges Comments: Howie: “I love you, you are supposed to be here and you will change the world.” Simon: “Every time I hear a story about a kid being bullied at school it breaks my heart, any one of those idiots now I hope they are watching this auction. I knew you would be good, I didn’t know you would be great.” Heidi: “If Howie gets up to dance you were really good because he never dances. When you play with your instrument you play with your heart and we feel it.” Sofia: “It was special to us because we could see how special it was to you, America is going to fall in love with you.”