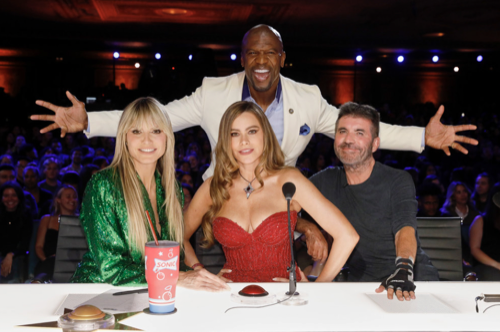 Tonight on NBC America’s Got Talent begins with an all-new Tuesday, July 12, 2022, episode and we have your America’s Got Talent recap below! In tonight’s AGT season 17 episode 6 “Auditions 6″, as per the NBC synopsis, “The auditions continue as a variety of acts and contestants of all ages audition for the chance to win $1 million; the Golden Buzzer is back, allowing a lucky act the chance to go directly to the live shows to compete for America’s vote.”

In tonight’s America’s Got Talent, it’s night six of the auditions. There were plenty of acts tonight. Some were good. Some were not! It was a mixed bag. But the people who stood out were the Asian boy band. They chose a song that got the audience on their feet. They also choreographed a stellar routine.

They wore glittery jackets and their act was part boy band/part Broadway. Simon even said that they had great personalities. He listened to the audience and the audience loved this group. It was just unfortunate that a certain someone forgot their names. Forgetting their names was a crime. What was also a crime is that they failed to get the Golden Buzzer when they deserved it.

Next up was Don Lessem. He was from Philadelphia. He had an animal act. He went on stage and told them that he had the most dangerous animal there was. He failed to mention that it would be two men in dinosaur costumes. You could see their legs. It was more of a singing act and the singer wasn’t all that good.

The whole act was a waste of time. It just wasn’t bad as the guy who showed up in the parrot mask. That guy kept repeating “how are you guys doing tonight” over and over again. he had to be escorted off the stage. There was also a young woman by the name of Shanay who brought out a cockroach circus.

The cockroaches didn’t even do anything. They were pushed along the way by Shanay. The only thing she had going for her act was that it was original. Simon said “yes”. Both Heidi and Sofia said “no”. Shanay was told to come back when she had an act. Howie wasn’t there because he still isn’t feeling well.

He’s been missing for so long that you would think the show would have hired someone to stand in for him. But that wasn’t the case for tonight. It was just the three judges and two “yesses” was enough to advance. And not many were able to advance because their acts sucked that bad.

The next act was a singer. Ben Waites was from Nashville, Tennessee. He was a gospel singer that was used to singing in church and so this stage was one of the few that allowed him to sing publicly. Ben also has some disabilities. Only his version of “True Colors” was so beautiful that it moved the judges. There was at one point a moment in which Ben was losing the audience. So, he switched gears and he brought it home in the end. The judges gave him a standing ovation. They also told him that they understood that no performance is perfect yet they likes him anyways and Ben was given all he need to advance to the next round.

There were a few acts that made it through without being highlighted. But one act that was highlighted was Flora and Nico. They were gymnasts from Argentina. They pulled off death-defying acrobatic movements in the air. They also got quite steamy onstage. The couple was married in real life and it seems they could still bring the fire. It wasn’t surprising when these two got three yesses from the judges. They were good. They might even be Las Vegas-worthy. Next up was Acapop Kids. They were an acapella group that comprised teenagers and preteens. They formed over the audition process. And they sang in honor of their late friend who died too young.

The group performed an original song by their late friend called “My Turn”. Their friend’s parents were in the crowd while they performed and they were moved to tears when the group kept their son’s memory alive onstage. The song was amazing. The kids all have great voices. They were all destined for something great and their future on AGT looked bright. They got all yesses from the judges. They’ll be advancing to the next round. Next up were Klaus and Henry. They were an escape duo. They were longstanding friends. Brothers of the soul. They handcuff each other and set things on fire. And it was all scary as well as thrilling.

But thankfully everyone was okay. They escaped and they made it back on stage without anyone being harmed. They showed off great showmanship. They had a great act that had everyone on their feet and so the judges gave them all yesses. Next up was Adam. Adam was an expert whip cracker. He cracked two whips while poor Sofia stood still. That part wasn’t enough for Simon. He hits reject button even as things got better from there. Adam was able to strip over toilet paper as it floated in the air and it was cool towards the end. It just had a lull in the middle. Simon still said no. Sofia and Heidi gave him yesses. And so Adam will be going to the next round.

Next up Jeremy and Stephanie. They were from Colombia. Which made Sofia very happy. They needed an interpreter to talk to the rest of the judges, but where the interpreter failed, Sofia was able to step in to translate. The duo met when Stephanie was Jeremy’s dance teacher and now they were a dancing duo. They combined salsa as well as acrobatic movements into a lively performance. The couple made Sofia very proud. She and the others gave the duo what they needed to advance into the next round. But they were one of the few to advance. There were a lot of disappointing acts and most of them got dumped before they could talk.

Take the Broadway chick. There was a young woman who wrote a song about Simon and it was so Broadway and so not what the show is about that of course she was given a bunch of nos. There was also Alex who came back. Alex was told when he first auditioned that he did so with the wrong track. He was a violinist. A good one too. He then came back the next day with a better track and that time the judges were willing to let him advance. But it literally took him having to come back. Most people weren’t that lucky. Especially the ones who auditioned for tonight’s episode and who’ve had to deal with a shorter amount of judges.

Arnold and Martin were brothers from Albania. They were also daredevils who put on an act in which they pulled off feats of strength and balance. The brothers have day jobs that they intended to keep even if they do win this year. So, they were smart on top of talented. They were also one of the few who advanced into the next round. Next up was Wyn Starks. He was from Nashville. He’s been singing his whole life. He’s now singing professionally. He used to be in Hospitality, but then the pandemic happened and he was forced to find other work. Wyn had also recently lost his twin brother. His brother used to be his chief support and now Wyn’s trying to adjust to a life without him.

But he did so well tonight. Wyn got a standing ovation from everyone. Even the judges. They all thought he was amazing and they express condolences for his loss. And they gave him all the yesses they could possibly give.

So be on the lookout for Wyn Starks. He might just be the winner of this season.