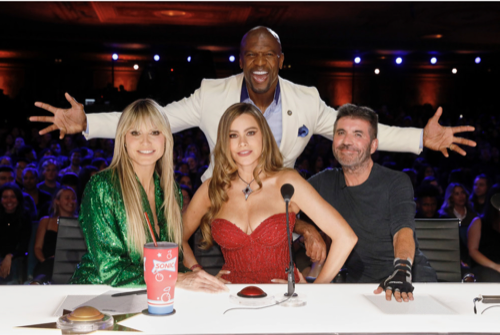 Tonight on NBC America’s Got Talent begins with an all-new Tuesday, July 19, 2022, episode and we have your America’s Got Talent recap below! In tonight’s AGT season 17 episode 7 “Auditions 7″, as per the NBC synopsis, “The auditions continue as a variety of acts and contestants of all ages audition for the chance to win $1 million; the Golden Buzzer is back, allowing a lucky act the chance to go directly to the live shows to compete for America’s vote.”

On tonight’s America’s Got Talent episode, Howie was once again missing for tonight’s episode. It thankfully didn’t affect the show or the talent. Speaking of talent, up first was an acrobatic group called Amoukanama. They were all from West Africa. They talked about themselves. They admitted they’ve lived in poverty. They struggled with getting enough to eat as well as supporting their families and so their chance to be on the show was something like a miracle to these young men. But boy did they make the trip worth it. They pulled off daring scenarios. They danced. They pulled off acrobatic movements in the air. And all in all, they put on a great show.

The three judges all applauded them on their amazing audition. They couldn’t wait to see more from them and the audience felt exactly the same. The audience even gave the guys a standing ovation as they flipped off the stage. They were naturally heading towards the next round. Next up was Sam Cieri. He’s been making music his entire life and last month was the first time he was able to pay off his bills by singing. His dream is to one day be able to support himself by using his voice. Sam does have a wonderful voice. He chose a song that had a lot of emotion in it. He genuinely looked like he was tearing up on that stage with all the raw emotion in his song and the judges loved it.

The audience loved it, too. His voice was very surprising. Sam didn’t sing like how he talked. Simon said it was like he swallowed a great singer. Sam put out one of the best performances of his career and so of course he got yesses from all three judges. Next up was the Traffic Cone Saxophone Man. he played saxophone with a traffic cone in it. He wasn’t that bad, though. His title sounded worse than it was. Simon hated it enough to give it a no while both Sofia and Heidi gave him yesses. Traffic Cone Saxophone Man was going to the next round. And after him, there was May Tree who were a singing group from South Korea.

Funny story with this group. The guy who created the band had gotten kicked out of another band for being a bad singer and so Simon laughed at the story. Everyone wanted to hear if the guy was really a bad singer. Only it was hard to tell with what they performed. The group performed theme songs from several American television comedies. They sounded great with those who did sing. It also sounded great with those who just beatbox it. It was great both ways. The judges loved the surprise element and so they gave them all three yesses. Next up was Ballet After Dark. They were a group of dancers who were all traumatized and chose dance as a way of healing.

It was a great story to get behind. It’s just that ballet isn’t really something built for Las Vegas. The judges gave the group three yesses and they did so more for spreading the message than for seeming more of the dancing. Next up was Svitlana Rohozyna. She was twenty-six. She was originally from Ukraine. She was in the United States to pursue her American dream. Some of her family were with her. Her dad however was fighting on the frontlines in the war in Ukraine against Russia. Svitlana was both an acrobat as well a daredevil with all that she did up in the air. And it was beautiful and precise.

Svitlana got yesses from everyone who watched her perform. There were yesses from the judges and a standing ovation from the audience. Next up was Jack the Whipper. He was thirty-three. He’s from Boston. He works as a news anchor for NPR. He has a great voice and yet that wasn’t his talent. His talent was with the whip. He doubled whipped. He singled whipped. He back-whipped. He even whipped a pencil in half as it was lodged between Simon’s legs. Simon tried to nominate Sofia for the job, but he got stuck with it and that whip came pretty darn close to him. Simon was so relieved afterward that he voted yes and so did the other judges.

Next up was Sing Harlem. They were from Harlem, New York. They were a choir. They sang all over New York and they were ready to go global. They performed En Vouge’s “Free Your Mind”. It was a great performance. It was only Simon who didn’t think so. Simon said it sounded like a musical and he didn’t know if that was a good or bad thing. He wanted them to perform another song. They didn’t have another track. They just winged the second performance by performing “Amazing Grace”. They sounded great with that song too and so Simon finally appreciated them during that second performance. And all three judges voted yes for it.

But something happened during the second half of the episode. A strange yet familiar face appeared. Howie Mandel came back and it was back to there being four judges. Howie was asked how he felt. He said he feels a thousand times better. He was ready to get into it tonight and so this next act was crafted just for him. They were John Glenn High School Dance Team. They were from Bay City, Michigan. They knew Howie didn’t like dance teams and so they wore costumes dressed up like him. Howie couldn’t hate a dance team dressed up like him. They went on to perform a great routine.

It probably would have looked better if a bunch of Howie Mandels wasn’t performing it only they still looked great. Simon was still freaked out, though. He had this look of horror on his face when they first came out and he was still pretty freaked when they performed. It was weird seeing all those Mandels but all the judges gave yesses to the dance team. Next up was Amanda. She was a singer. She was nineteen. She was also really nervous. She has a speech impediment and it came up on stage as she was talking to the judges. Amanda said it doesn’t come up when she sings. And she came prepared.

Amanda performed an original song tonight. She has a beautiful voice. Her song also resonated with a lot of people and they all gave her a standing ovation at the end. Amanda got four yesses. She also got an audience that told her she is good enough to be there. She had doubted at first. Only she wasn’t doubting it anymore. Not after this. Next up was the Lazy Generation. They called themselves athletes. They were originally from London. They said they skipped out on “Britain’s Got Talent” because it wasn’t really their type of activity there. And it turns out their act was more of a “Jackass” the show thing.

They did stupid stuff to hurt each other. It was so stupid watching them. Some people couldn’t help laughing. Howie gave them a yes. Heidi gave them yes. Sofia gave them a no. Simon decided to listen to the audience and so he said yes as well. This stupid little act was getting into the next round. There were other stupid acts only they didn’t make it into the next round. Next up was Yu Ho-Jin. He was from South Korea. He’s been in the army for the last two years and he was there in the United States because he wanted the world to know his name. He was a magician. He pulled off some interesting piece of magic.

Ho-Jin’s magic was mesmerizing. It was elegant. It was precise. The only person who wasn’t impressed by his act was Simon. Simon said no. The other three judges said yes. Next up was Chapel Hart. They grew up in a small community called Hart’s Chapel in Mississippi. They were friends. They were a small singing country singing group. They performed an original song called “You Can Have Him, Jolene”. It was inspired by Dolly Parton’s “Jolene”. They changed it up because they figured they couldn’t be fighting over the same man for the past fifty years. And they were so great that they got the Golden Buzzer.

Chapel Hart was going straight to the live shows!