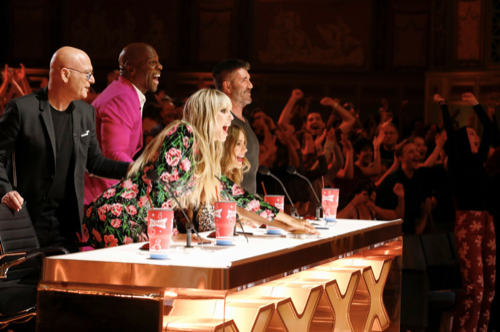 Tonight on NBC America’s Got Talent begins with an all-new Tuesday, July 26, 2022, episode and we have your America’s Got Talent recap below! In tonight’s AGT season 17 episode 8 “Auditions 8″, as per the NBC synopsis, “The auditions continue as a variety of acts and contestants of all ages audition for the chance to win $1 million; the Golden Buzzer is back, allowing a lucky act the chance to go directly to the live shows to compete for America’s vote.”

Tonight’s America’s Got Talent episode begins with the first act, Bayley Graham is a tap dancer from New Zealand. He is hoping that his career can start on the AGT stage.

Judges Comments: Heidi: “I loved it too, love your amazing personality.” Sofia: “You deserve to be somewhere performing professionally. You are soon going to be where you want to be in your career.” Howie: “When you said you got a tap dance I think everyone knew what to expect, but we have not seen anything like you. You are a dancer, entertainer, and a show, I loved it.” Simon: “I know zero about tap dancing, you undersold yourself.”

Four yes votes put Bayley through to the next round.

Freckled Zelda is a music fairy from the Freckled Forest and she is going to be using an ocarina, which is a type of flute. A standing ovation from the audience and Zelda is crying. Howie says that as a community, we shouldn’t judge a book by its cover.

Judges Comments: Heidi: “I loved it. You have an amazing voice. The potato flute was cute too. I think you are great.” Sofia: “It was a beautiful song, your voice was beautiful too.”Howie: “You showed us who you are with your voice and your being.” Simon: “When you walked out, I thought this really was going to be terrible. But you have a really good voice. I don’t like the instrument, it’s not necessary.”

Freckled Ferry Zelda is also going through with four votes.

Maxence is French from Paris, he is a 32-year-old magician who has been doing it since he was then years old. He is more of a comedian/magician.

Judges Comments: Heidi: “It was so much fun, you tick all the boxes, funny, magic, and charming.” Sofia: “I thought the whole thing was brilliant, you are so funny, I really love your act.” Howie: “You are not only a great magician, but you are also very funny, you have this great energy.” Simon: “At times annoying, unusual, however, the audience loved you. Tres Bien.”

RCC Aruba aka Rhythm Circus Company is a group of eight and they make a living from their act. Before they begin, the men take off their shirts. After some amazing acrobats, they add fire to the act. Terry Crews says this is a Vegas act.

Judges Comments: Heidi: “Fantastic, fantastic.” Sofia: “Now that is unbelievable. It was perfection, exciting.” Howie: “It was thrilling, it was exciting, it was edgy, you blew my mind. Unbelievable.” Simon: “Before you started I thought Oh God there is a plank and a bouncy castle, this isn’t going to be great. But actually, it was less polished but it was really cool.”

RCC Aruba made through unanimously.

Gina is 41 years old from Nevada and she is a comedian.

Judges Comments: Howie: “I disagree, I think you are memorable, wonderful, and funny.” Simon: “I thought you were a little robotic. That kind of comedy doesn’t make me laugh”

Regardless of Simon’s comments, she gets yes votes from the other judges and makes it through.
Kim Evey is from Los Angeles and she is also a comedian.

Judges Comments: Heidi: “I liked and I am going to give you your first yes.” Sofia: “I thought it was funny, relatable.” Howie: “Yes.” Simon: “I don’t know, something didn’t quite click for me I’m afraid.”

Kim also makes it through.

Don McMillan is 62 years old from California, he is a stand-up comedian and has brought a screen with him. Howie gives him a standing ovation.

Judges Comments: Heidi: “That was different, I loved it and you had me in stitches.” Sofia: “I thought it was brilliant, your charts, your energy. I had the best time.” Howie: “The uniqueness, you are going to be remembered as the guy with the PowerPoint presentation. And to deliver that way is very now.” Simon: “I didn’t get it, but everyone else did and I don’t like PowerPoint.

Simon says no, but the other three say yes. Don is going through.

Ava is from Oxford, Michigan, she is 18 years old and she is a singer and she choose to sing “Remember” by Lauren Daigle because on November 30th she and her brother were a part of the Oxford shooting, they lost four students and one of their teachers. Music has been therapy for her.

Judges Comments: Heidi: “It was amazing and more amazing over here. You are incredible, great, and special.” Sofia: “You took my breath away. You were just not singing, you were showing your feelings.” Howie: “In life, it is tough to show up, especially after incredible trauma, the fact that you can break through that a shine like you did today, is inspirational for every human being. You really shined.” Simon: “I think you are gutsy. This is one of those auditions, I have so much respect for you and you have a great voice. I am happy to have met you.”

She gets four yes votes to move forward.

Trey and Sierra are from Maryland to dance, they are from the same dance studio. He is 17 and she is 16, they are best friends.

Judges Comments: Heidi: “You guys really brought some new moves, I loved it.” Sofia: “That was amazing, I thought that was so beautiful, I loved it.” Howie: “I love the coordination, but it was lacking crispness for me.” Simon: “I really like you two, was the dance a story? (Sierra says she danced it for her dad who passed away from a heart attack) I felt it, I love friendship.”

Howie doesn’t think they are ready for the stage, but the rest say yes and Simon says he has two new friends for life.

Auzzy Blood is from Las Vegas, he is a sideshow freak who endangers his life for other people’s entertainment. He wants to be main show, not side show. After swallowing a bunch of swords, he calls Howie to come up on stage as a volunteer. He gets Howie to put the sword down his throat.

Judges Comments: Heidi: “I love you, a yes from me.” Sofia: “I feel like I wasn’t supposed to be looking. It was fun.” Howie: “I was touching things that I shouldn’t have been touching. I am disgusted and entertained. You are the Beetlejuice of sideshows.” Simon: “What will we see next (break a world record)”

Auzzy Blood makes it through.

Caroline is from Boston, Max is from Montreal and Caroline admits she appeared on season 12 with her husband. The dream is to open their own show and show their art to the world.

Judges Comments: Heidi: “I loved it, the music, everything.” Sofia: “It was sexy and mysterious, I want to see more.” Howie: “You didn’t have a net, it was so exciting and so amazing.” Simon: “I like the act, but the story is interesting as well. Did you dump your husband for a new partner? (No)”

They get four yes votes to move on.

Debii Dawson is from LA, music is everything to her, it is her legacy. This is one of the most important nights of her life, the dream is for this not to be a dream and be her reality. A standing ovation from the audience, Simon and Sofia.

Judges Comments: Heidi: “I wish you would look up a little more, your voice is as gorgeous as you are.” Sofia: “There is something amazing about you I wouldn’t mind listening to your voice all day long.” Howie: “You sound so sweet and soothing, you have a star quality.” Simon: “I love the song you choose, you made it your own. I am really happy you auditioned on the show.”

Another four yes votes for Debii. Simon asked her to Facetime her parents. Howie takes the phone and says she blew the roof off.

A man in an apple costume comes on stage, he is Big Apple. He is there to prove that AGT stands for apples got talent. Big Apple is a comedian. It doesn’t take long for the X buzzers to go off, all four of them. It turns out, that inside the apple is Sethward.