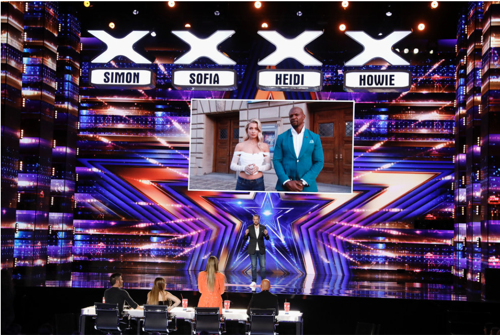 Tonight on NBC America’s Got Talent begins with an all-new Tuesday, August 2, 2022, episode and we have your America’s Got Talent recap below! On tonight’s AGT season 17 episode 9 “Auditions End And Judge Deliberations″, as per the NBC synopsis, “The auditions come to an end and the judges must decide who will move on to the live shows; the series stars Creator/Executive Producer Simon Cowell alongside celebrity judges Sofia Vergara, Heidi Klum and Howie Mandel; Terry Crews serves as host.”

Tonight’s America’s Got Talent (AGT)  episode begins with Emily Bland, she is 29 years-old from Arkansas and she looks up to Garth Brooks. She does improvisational lip synching.

James and his wife are mentalists, they have been together for five years. They developed a connection on their third date.

Judges Comments: Sophia: “What you guys just did is fascinating, mysterious, spectacular.” Heidi: “I am gobsmacked, this was wild.” Simon: “Did that just happen, it was unbelievable, it was amazing.” Howie: “I love the presentation, I think you have a good chance.”

Four yes votes get James and his wife to the next round.

Aubrey Burchell is a 21-year-old singer, she wants to sell out at arenas all over the world and she wants Grammys. She is autistic and wants to show other people that you can do anything no matter what.

Judges Comments: Sophia: “Aubrey, you are the perfect package. You look so cool, America is going to fall in love with you.” Heidi: “You really have a fantastic voice, you have the pipes and sound beautiful, and you have a cool look.” Simon: “The fact that you sang your version was a genius, incredible.” Howie: “Just showing up is a feat in itself and you are really brave.”

Bay Turner is 25 years old and he is from Houston, Texas. His dream is to sell out the biggest arenas in the world. He works from home, he is a legal assistant. Music has always been a safe place for him.

Sophia: “You seemed very nervous, but it was gone.” Heidi: “I love your voice and your range.” Simon: “That was really good, you have a good tone and good taste. I think people are going to like you.” Howie: “That was so powerful, we could hear and feel you singing.”

A birthday comes out on stage to celebrate Terry Crew’s birthday.

Waffle is a group of five, they do double dutch, they live in Tokyo and are here from Japan.

Sophia: “You guys are so perfect, so in synch.” Heidi: “You went so fast and kept changing it up.” Simon: “I love you. Everything about it was super cool, it got better and better.”

Waffle makes it through to the next round.

Neguin is from Brazil, he moved to NY 15 years ago. He travels the world dancing. And, he says what they are about to see is going to blow their minds.

Judges Comments: Heidi: “Your feet were in the air more than they were on the floor, you are crazy. I can feel how much you want it and you were so good.” Simon: “The routine was amazing, I am going to remember you because you were super talented.”

Neguin makes it through to the next round.

Unreal Crew are dancers from India, they have been dancing together for three to four years.

Sophia: “That was definitely unreal guys. You looked great and it was perfection.”

Heidi: “It’s crazy how five guys can make so many shapes, I loved the comedy too.”

Simon: “I have never seen an act like this it was brilliant.”

Unreal Crew makes it through.

Camille K. is 16 years-old and she is singer. She is on the show because she hopes her dreams can come true. She wants to spread love and joy through her music and tell her story. Simon stops her a quarter way through and tells her to do something more stand out. She sings an original

Judges Comments: Sophia: “I thought your voice was much more than beautiful, it was spectacular. I couldn’t have liked it more.” Heidi: “Absolutely amazing and you are just gorgeous. You are the whole package.” Simon: “I really liked you, you need to find the song that defines you, that is the key.”

Angelina and Michaelangelo Nocks are father and daughter. Their family has been performing since 1840. They got their name Nerveless Nocks from the Queen of England.

Judges Comments: Sophia: “That was intense. I think that was spectacular.” Heidi: “My hands are wet my heart is beating, and I am exhausted. You leave me wanting more.” Simon: “You look so normal and you are not. I think what you did is unbelievable.”

Three yes votes to move to the next round.

Terry sits with the judges, they need to take 138 yesses and have to pair that down to 55 acts. First, they take a look at the Golden Buzzers.