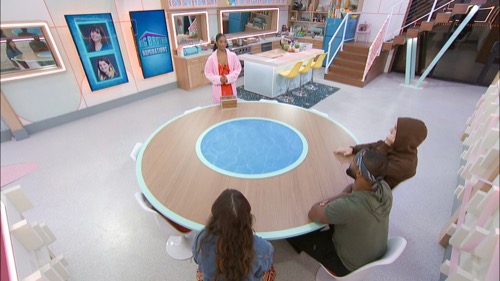 Tonight’s Big Brother episode begins with Monte and Taylor, is the honeymoon over? Taylor winning HOH and Monte winning Veto, the two have cemented their spot in the final three. Monte is the one who gets to decide if they are taking Turner or Brittany. Turner shares a bedroom with Monte, clearly he is sharing the HOH room with Taylor so obviously he is going to take his girlfriend to final two and he is worried. Monte is telling Taylor about his god-daughter, she makes a comment which is rude and insensitive so he puts headphones on to listen to music rather than responding.

Taylor turns over and grabs her headphones, Brittany is watching, Turner is there as well and she is just making a joke and Monte doesn’t take it it well, he gets up and leaves the room. Meanwhile, Turner wants to know how serious the relationship is, in is he taking him to final two or Taylor to final two. Turner and Monte are downstairs, Monte asks him if the showmance is going to continue outside the show and he says no, not if she is looking on to be on a power trip like she was earlier in the HOH room.

Monte goes to speak to Taylor, she is in the bathtub and he tells her that he didn’t appreciate what she said about his god-daughter, he felt it was condescending and taking the headphones, it was a like a power trip and he was just done with her. She says it was a joke for Brittany’s benefit and she didn’t mean to make her tone disrespectful. He then says that when Daniel said that she was rubbing the house the wrong way, it is the cold person that she shows, that stuff today made him think he doesn’t want to spend anymore time with her, it was such a turnoff. And, he doesn’t feel comfortable spending the night with her.

Taylor says she has more important things to think about than a relationship with Monte.

We get a glimpse into the jury house when Terrance walks in, he tells them it’s a double and Michael runs in. Jasmine is shocked, she really thought he was going to win. They watch the episode together when Michael won the HOH and Terrance laughed when he nominated him. Then Alyssa walks in and everyone is shocked again. They watch another episode where Brittany lost the HOH by 9 seconds. Alyssa is upset at Turner, they made a promise to each other and she would have taken him to the end. Alyssa reveals that Taylor slept in Monte’s HOH room for three nights in a row.

Big Brother has a small surprise for the final four, videos from home. Afterwards, Brittany makes a last ditch effort to pitch Monte to keep her in the house and evict Turner. Turner’s resume is starting to get good, so Monte is considering evicting him because he knows he can beat Brittany.