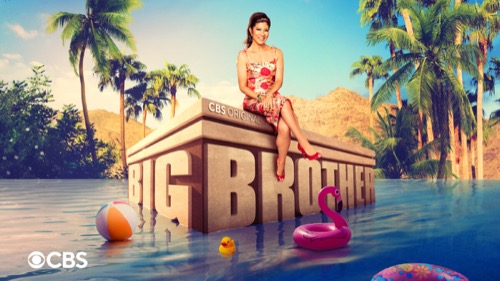 This season’s cast includes an attorney, a Vegas performer, a hypnotherapist, a private chef, a chemical processing engineer, an interior designer, and a personal stylist, among others. With never-before-seen challenges, these 16 Houseguests are in for the summer of their lives at “BB Fest.”

Tonight’s Big Brother premiere episode begins with Julie Chen Moonves announcing that summer is here and the live season premiere of Big Brother. Sixteen complete strangers will enter the house with one goal in mind, to be the last one standing. All summer long they will compete for safety. The BB house has been transformed into the BB Motel in a BB fest summer. Here are the first four houseguests to enter the BB house:

Jasmine Davis is a southern bell from Mississippi. Her dad loves Big Brother and if he were still here he would be very proud of her.

Kyle Capener makes videos, he used to be a Mormon, but he is not anymore. He lives with his parents. He excels at anything and plans on avoiding showmances, as much as he can.

Paloma Aguilar takes lots of pictures of herself on the beach. But she is still business-oriented and just got her real estate license. She is ready to dominate in the house.

Monte Taylor is a fitness coach, he got into it during the pandemic. He also has his degree in chemical engineering. He does impressions and believes he is the perfect package of brawn and brains.

Time for them to enter the house, inside the house are four stations that contain tickets to the hottest festival of the summer, the BB Fest. Upon entering they have to find a station and grab a ticket. They walk in and more just look around than look for the stations. One by one they start finding them. Julie tells them to head to the backyard with their ticket. Julie tells them that there are three festival hotspots in the backyard; the porta-potty, the piercing tent, and the merch stand. Their ticket will give them access to one of these locations where a competition awaits. They have to scan their tickets. When all 16 houseguests arrived the competition will begin. One ticket holder’s ticket will make them the backstage boss.
The next four houseguests arrive:

Alyssa Snider says she is just not a pretty face, she writes poetry and is lots of fun. Big Brother has always been a big fan of her life, her family loves it. She wants to be friends with everyone.

Daniel Durston is an Elvis impersontator. He is excited to be on BB because he is a huge fan and watches the feeds until 3 am. But he’ll lay low until he wins.

Taylor Hale is a personal stylist, she has to be comfortable working with powerful men. Five years ago she became a beauty queen. She is on BB to compete and to win, she hopes they are ready for her, she is coming for another crown.

Michael Bruner is a criminal defense attorney and a certified genius. He has been watching BB since he was eight years old and wants to win the first HOH.

Daniel goes right for the ticket while the other three hug each other. They head to the backyard with their tickets to find out which competition they will be playing in.

Time for four more houseguests:
Nicole Layog is a private chef and before that a police officer for ten years. She has been watching BB since season 1 with her mom. She knows that she is going to win BB.

Matthew “Turner” Turner owns his own thrift store and is also an artist. He is able to adapt to anything and has no doubts that he is going to win.

Joseph Abdin works out every single day, with no days off. He is in training to be a lawyer.

Brittany Hoopes comes from a very corporate family, she has been watching since season 1 and doesn’t plan on telling anyone that she is a hypnotist.

The last four are entering the BB house:

Terrance Higgins is a bus driver and loves to meet new people. When he stops working, he becomes a DJ. He has four children and is excited to play after watching it for so long with his family.

Indy Santos is a corporate flight attendant from Brazil. She is a super fan of BB and thinks her social skills are going to keep her in the house.

Joe “Pooch” Pucciarelli is a college football coach and is also working on his MBA. He is a huge fan of BB and watches with his mom.

Ameerah Jones works from home, she can virtually work from anywhere and has been able to visit over thirty counties. She is open to anything in the BB house.

Here are the final standings for the competition:

The winner of each competition will move ahead to the main round where they will compete to become the first HOH of the summer. Pooch, as the Backstage Boss, will not be competing in the HOH competition.

Time to begin the Porta Potty competition, this is called potty talk. They have to listen to a conversation where 1, 2, and 3 are said multiple times. They have to discover which number is said the most. This will continue for four rounds until there is a winner. They have to put on goggles. As they answer wrong, they get doused with blue paint. Monty wins.

The piercing tent’s competition is called piercing panic. On their table are ten pieces of jewelry, they have to place them on their face according to a photo. The first person that does it correctly, wins. Turner is the winner.

The merch for BB fest is flying off the shelves. This one is simple. They have to grab the t-shirt above their head and hang on. The last one is to drop wine. Daniel is the winner.

Down to the final competition called “Drumming for Power,” On Julie’s go they will race to unpack their road case and assemble their drum set puzzle. The first person to do it will be the first HOH of season 24.

Daniel is the first HOH of the summer. Pooch is the backstage boss, he will be backstage all week long. He is not competing and he will not be voting come eviction night, and he is safe. He has a unique power, he can pick other three other houseguests to send backstage. They cannot be nominated, and cannot compete but unlike him, they are not safe and cannot be voted out.

Pooch has to choose who to send backstage for the week. He chooses the ones that lost their competitions first, Paloma, Alyssa, and Brittany.