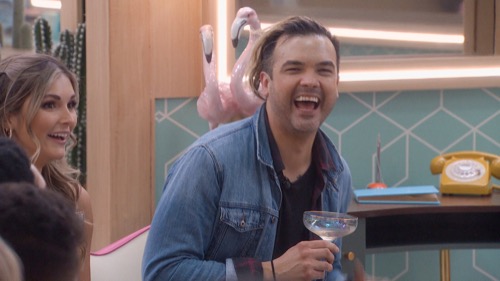 Tonight’s episode begins with Daniel, he wants to get Michael out of the house because he is a super fan. Michael goes to see Daniel after nominations and he tells him that it doesn’t change how he is playing the game. Michael is going to smile and act cool, but he plans on getting his revenge. Alyssa is really happy that none of the Girls Girls alliance is on the block this week. Terrance goes to see Daniel next who says his heart is breaking. Daniel tells him that he is not a target, he is strictly a pawn.

Taylor brought some of her best outfits to the BB house and she dazzled everyone. Kyle grabs her for a dance and says it is better than dancing with his mom for a change. Paloma says Taylor looks like a living doll and flaunting like she is in a pageant is just wrong.

Michael goes around the house and tries to campaign for people to fight for him in the Veto competition, but everyone is really non-committal. He realizes that he is going to have to win it for himself.

It is time to pick the players for the Veto competition. Pooch, Alyssa, Paloma, and Brittany do not qualify to compete. Daniel picks Indy, Michael picks Turner, and Terrance picks Ameerah.

Time for the Veto Competition and the houseguests are transported into Medieval Times and it is a jousting tournament. Competing knights will mount a noble steed and a floppy lance to catch rings. Turner and Indy are up first. In the end, Michael and Indy do very well and come out ahead, they go to sudden death and Michael wins the Veto. Now, this makes the game interesting!

Daniel starts looking at the table at the other houseguests, he has a big decision to make.

The Girls Girls are talking and they are worried about who Daniel is going to put up to replace Michael. They are also worried about Monte, Kyle, Michael, and Joseph, they think they have an alliance formed because they are tight, all together, all the time, like a ride or die. Taylor is also in the room but Palma doesn’t trust her. So, Paloma goes around the house and tries to get people on board to get Taylor nominated.

Paloma continues to go around the house and turn people against Taylor, she tells everyone that she needs to go home. Taylor’s plan is working, the house is turning against Taylor and Daniel thinks she may just be a good person to put up. Taylor goes to see Daniel to talk game, she asks him if people are giving him names, and he is cut off guard, but he says socially one or two people feel like they wish they could get to know her better. Taylor clues in and knows it is not good if anyone spoke about her in the HOH room.

Taylor breaks down, she is worried that she is going to be put on the block. She feels like she is at her wit’s end and she has to let it all out.

Time for the Veto meeting, Michael uses the Veto on himself Daniel nominates Taylor, she is on the block with Terrance.