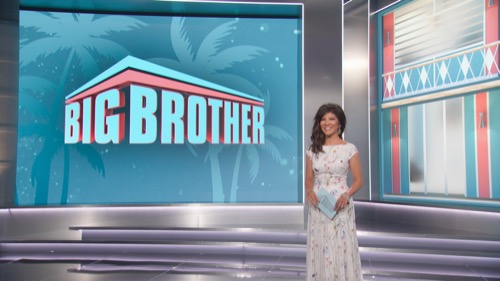 In tonight’s Big Brother episode, people’s games were saved once Paloma left. Paloma had to leave because of a personal matter. Her leaving saved the group from nominating someone to go home and so tonight was truly the first night of the game. They were told going in that anyone could go home tonight.

But some like Taylor didn’t heed that warning. She got a little cocky about not being eliminated and she bragged in her confessional that she has a thumb on everyone’s neck only that might not be true? They were others that got cocky as well. Terrance felt he got a second chance thanks to Paloma leaving and he swore that he wouldn’t squander his second chance.

But as history would show, a lot of the old guys get cut pretty early on. There were also alliances to contend with. Several people had alliances with two different groups in the house. So, no one was safe. This especially went for Jasmine. Jasmine was injured. She had to use crutches or the kindness of strangers to get around and so that won’t help her game. How will she compete? She wouldn’t be able to take part in any of the physical activities for HOH or even Veto. She will once again have to rely on the kindness of strangers. If she plays this smart, she will bond with people now that they don’t see her as much of a threat. And that bond could get her far.

The challenge for HOH came up. Daniel created two enemies when he nominated two people up for elimination and, unfortunately for him, they weren’t the forgiving type. Something that Daniel suspected going into the HOH challenge. Daniel was not eligible to compete in the challenge. He instead played host to the pie-eating contest. The contestants had to hear a question and pick either a “t” or “f” in the pie out while just using their mouths. With the pies getting larger with each round there was. Some would have thought Joseph would have struggled with this challenge. But he was a pie-eating demon.

Joseph didn’t let his love for physical fitness stop him from being the first to grab a letter while getting that letter right. He ended up going to the next round. Kyle and Monty were eliminated in round one. In the second round, the contestants eat a blueberry pie. Joseph however did get knocked out during the second round. Taylor was also eliminated in the second round and that was proving to be a problem for her because everyone in the house pretty much considers her to be enemy #1. They want to get rid of her. They figured people are already set against her and so her not winning was a downfall.

After several pie-eating contestants, it came down to Michael and Jasmine in the final round. They had to eat a large cherry pie. The pies were bigger than either of their heads. They were in an alliance with each other and so Jasmine tried to convince Michael to throw the race. But he felt that Jasmine should win if she really wants it. They competed against each other by eating the pie and finding the right letter. Jasmine was the first to hers. She won the HOH challenge. She proved that she’s still a fierce competitor in spite of her injuries. She was also doing her best by abiding by her two separate alliances.

Jasmine has one alliance with the other women in the house. She has a second alliance with a select group of both sexes. But Jasmine was especially glad that Taylor didn’t get it. Everyone but Taylor was glad she didn’t get it. She was someone that people agreed on putting up for elimination. Michael even thought that and he still reached out to her for an alliance because he figured if she survived all the machinations – she would be a formidable player. Pooch wanted to use the veto to get Taylor through the back door on the chopping block. Others felt that was a stupid plan because they didn’t need a backdoor to get rid of Taylor.

So, some started talking about getting rid of Pooch. Pooch doesn’t talk game with his allies. He tells them what’s the plan and they have to fall in line and that’s something many of them didn’t agree with. They wanted Pooch out. It also helped that Pooch couldn’t stop himself from being inappropriate. Like he’s the guy that would ask the sex coach to spank him. She turned him down, but that’s the sort of thing he’ll do and so he has a habit of annoying people. He even annoyed Jasmine. Pooch tried to convince her to nominate him as a way of sneaking Taylor through the backdoor. And Jasmine didn’t buy into his plan either.

Jasmine instead thought it was a great idea to get rid of Pooch now before he becomes a bigger threat. So, she told him that she was following his plan while she was also talking to Taylor about putting Taylor up as a pawn. Jasmine ultimately wanted them both gone. But she left it up to the house to decide. Jasmines nominated both Pooch and Taylor for elimination. They now either have to win veto or risk going home.

And so well played, Jasmine.