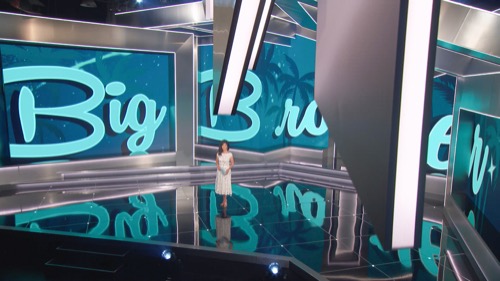 Tonight’s Big Brother episode begins with Taylor and Pooch still thinking they are both pawns. Alyssa came into the house saying no showmances, but Kyle is a sweetheart and she feels like she is connecting with him. After the HOH competition, the two have a moment together and Kyle admits he loves her eyes, when he touches his arm, she is so nice and kind. The two are smitten with each other.

HG’s are learning that Turner has a lot of random talents, and some are actually weird.

Joseph hasn’t been aware that the plan is to get rid of Pooch this week. Kyle knows it is Pooch, but he can’t say anything because it will ruin his game. Monte is in the same position as Kyle.

Kyle learns from Alyssa that there is an all-girls alliance and he is now worried for the guys in the house. Furthermore, she says they are trying to leverage Taylor to target the boys in the house.

Ameerah goes to Monte and tells him that Taylor wants to backdoor him so he better be careful. The more Monte thinks about it, getting Pooch out is not beneficial for his game. So, he goes around the house and starts to talk, he starts with Nicole and she doesn’t like the conversation. She is worried about a men’s alliance forming. She tells Monte that Pooch has a God complex and has to go. Nicole says no way to change the vote.

Nicole goes to speak to Indy and tells her that they are the strongest female cast ever and they are not going to let a man run their game.

Kyle is feeling the women in his alliance have loyalty to another group of people.

It is time for the first vote and eviction of the summer. Pooch says he is grateful to be there but he is not done, he means what he says and says what he means. Taylor says Pooch is a tough act to follow, if they choose to keep her she will change their minds and show that she is not a threat but an asset.

With a vote of 12 to zero, Pooch is evicted from the Big Brother house and this, is the first blindside of season 24. Taylor was shaking, she thought she was going. When Pooch is gone, she thanks everyone for keeping her in the house.

Julie calls everyone to the living room and she tells them that after two weeks of getting to know each other, it is time for this summer’s game-changing twist. If they are a true summer festival officiato you know that the only way to enjoy a festival is with a friend. Starting tonight they will be playing the game with a festie bestie. By the time this competition is over, they will all be playing the game with a bestie.

If they win HOH, their bestie is also safe. But instead of nominating two people for eviction, the HOH will nominate one set of besties. The VETO competition will also be played with sets of besties. If the VETO is used, the entire set of besties will get off the block and a new set of besties will replace them. But, on eviction night, the besties will be broken up because only one will be going home. What will happen to the bestie who stays house, we will only find out on next week’s live eviction.

Jasmine is not eligible to compete as the outgoing HOH. This competition is called GET LIT. It will determine the next HOH and the bestie. This competition will be held in rounds. In each round, they will hold down the button on their lighter, and music will begin. When the music stops, immediately sit down which will activate the sensor in their seat. The last HG to sit down and activate their sensor in each round will be eliminated.

If they release the button before the music stops they will be eliminated. When you are eliminated they have a big decision to make. If they are the first person eliminated, they can choose to be Jasmine’s bestie, or sit at an open table for two and someone else will choose them to be their bestie. The last houseguest left will be the new HOH and will automatically become the bestie with the last person who does not have a bestie.

Turner reveals that he only found out that Pooch was the target moments before the vote, so he is playing this HOH for him so he can get power in the house.

Monte is out next, he chooses Joseph as his alliance. Nicole is next and chooses Taylor as her bestie. Indy is out, she chooses an empty table. Daniel is out, but he threw the comp because he wanted the empty table, he didn’t want to pair with anyone who was already out. Kyle let go of the button before the music stopped, he chooses Daniel as his bestie.

Terrance is happy that Ameerah is his bestie because he considers her a strong player. She likes him because he is trustworthy. Taylor tells Nicole that she can’t go on the block again and she is happy to be aligned with her. Sadly, Nicole is using her as a shield because she is a target still in the house.

Joseph is happy that Turner is the HOH, it is good for his game.

Turner calls everyone into the living room. It is time to choose new Have Nots, the good news, is it is just one bestie duo that will have to do it and he is making his bestie, Jasmine has to choose. She chooses Indy and Alyssa. Indy is pissed that she is a Have Not and not handling it well, Alyssa is worried that she is going to cause them to be a target this week.

Nicole wants both she and Taylor put up for eviction and when Taylor goes home, she will get the advantage that Julie was talking about.

Kyle and Daniel go speak to Turner and they suggest Taylor and Nicole for the block. Or, Michael and Brittany. Turner wants to figure out what is best for his game.

Turner sits down with Nicole and Taylor. They tell him that they are in really good standing and a force to be reckoned with. Taylor thanks him for saving her in the last eviction.

Brittany goes to speak to Turner and she makes him super uncomfortable and really hard for him to trust. Next, he speaks to Michael who says he feels like he can speak to Brittany. Turner tells him that a lot of people say Brittany rob them the wrong way and if he put them up, he would be a pawn.

Time for the Nomination Ceremony. It is Turner’s responsibility to nominate one set of festie besties for eviction and they are Michael and Brittany.