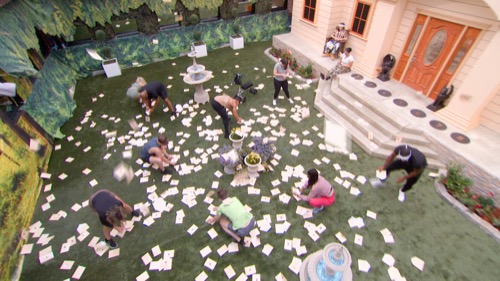 Alyssa doesn’t think Ameerah should have been evicted from the house and she doesn’t trust anyone anymore in the house. We go back to the eviction, Alyssa is crying and Nicole is comforting her and is furious that she didn’t give Ameerah, her best friend in the house a goodbye.

Turner congratulates the eight on winning the first part of the HOH. Now for the second part. When they hear a scream, they have to slide one goblet filled with blood down a table that has numbers on it. They do this three times and the HG who locks in the highest score wins HOH. Nicole is convinced that she is going to win and says she can’t wait to get after the people who put Ameerah up, she is coming for blood.

Monte wins the HOH with a total of 11 points. And he is really looking forward to getting some targets out of the house. Meanwhile, Nicole is determined to the bottom of why the house flipped the vote. And, she is still going on and on about how she didn’t get a chance to say goodbye to Ameerah.

Monte, Terrance and Joseph celebrate in the pantry room because they are all safe this week. Terrance is thrilled that he can’t be touched this week.

Joseph catches Alyssa crying and she says she just misses home and her person. He goes to tell Kyle because he thinks they may have a potential showmance brewing.

Monte shows off his HOH room and is brought to tears with his letter from home. Everyone starts to disperse and only the Leftovers are left in the HOH room. Taylor says she doesn’t want to be a pawn anymore. Monte just wants to make sure they are all aligned on who the targts are this week.

Monte is speaking to Alyssa, he wants to put up Nicole and Taylor, but Taylor is a no for being put up as a pawn. Monte tells Alyssa that if she goes up on the block she will most likely stay in the house because she has a lot of votes in the house. Alyssa doesn’t feel nervous about it, she trusts Monte.

Monte than speaks to Indy and tells her that she is going up as a pawn, she is not the target. Indy doesn’t take it well, she tells him that she would never had done it to him. Monte then meets with Nicole who tells him that she and Daniel are a force to be reckoned with.

Time for the nomination ceremony. Monte nominates Indy and Alyssa. The plan is to get rid of Alyssa, unless Taylor gives him the green light to backdoor Nicole. Well, Nicole thinks she is the next one going, so perfect.