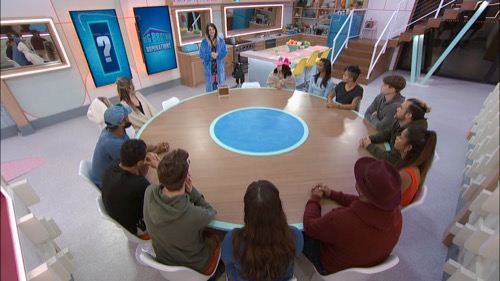 So, visit Celeb Dirty Laundry for our Big Brother recap between 8 PM and 9:00 PM ET.  While you wait for our recap make sure to check out all our Big Brotherrecaps, videos, news, spoilers & more, right here!

Tonight’s Big Brother episode begins with the end of the nomination ceremony when Indy and Alyssa were nominated. But, Monte would still like to get rid of Nicole, so it all depends on how the veto plays out. Alyssa can’t believe that Monte, a former member of her alliance put her on the block.

Taylor has been through so much in this house and the Leftovers only want to put her and Nicole up as replacement nominees if she is up to it.

Michael has his alliance within his alliance, he wants to take Taylor and Brittany to the final three with him.

Daniel is worried because Monte said that Alyssa and Indy were not the targets, so he goes to speak to him. Monte is saying nothing, he doesn’t want him to know that his closest ally in the game is going home. Monte tells him that the target is Taylor, to throw him off. Taylor doesn’t want to go up on the block, but it would be sweet revenge if Daniel was responsible for sending Nicole home.

Daniel goes to Nicole and tells her that the plan is that they are going to backdoor Taylor, but he doesn’t trust anyone. He wants to get the Veto and not use it, so he can save his final two with Nicole.

Time to pick the Veto players, Kyle and Daniel are chosen to play. Daniel is not telling Kyle that he wants the noms to stay the same. Meanwhile, Kyle is not saying anything either because he doesn’t want Daniel to know that the plan to backdoor Taylor is actually to backdoor Nicole.

Michael and Brittany are talking, they prefer the noms to stay the same because Alyssa will go home and they can get Indy on their side.

Time for the Veto competition. In each set of festie besties, one festie bestie will keep a clear mind, the other bestie will eat a spoonful of psychedelic slop and go on a trip of a lifetime. The slop trippers will be transported into a psychedelic world that is so totally far out. When they return to reality they will have 90 seconds to tell their bestie about their mind-altering journey. The trippers will leave their clear-minded bestie alone, who will have to answer multiple choice questions using only the information their bestie told them. The player with the most points after five questions wins the Veto.

Kyle and Daniel win the Veto.

Monte definitely wants to get rid of Nicole, but he is conflicted. Michael brings up the idea of voting out Alyssa and keeping Indy. Kyle doesn’t like it, he says it is a tough decision. Kyle thinks there is no good option, he loses his showmance or loses the trust of his alliance.

Monte speaks to Nicole and Daniel, he tells them that he wants to evict Taylor. Nicole doesn’t believe it. Daniel doesn’t trust Monte either. Monte tells Daniel not to use the Veto, now Daniel wants to use it because he doesn’t trust Monte. Daniel goes to Kyle and tells him that Monte wants to keep the noms the same because he thinks Monte doesn’t have the votes to get rid of Nicole and he wants to protect Taylor. Kyle is going to say nothing, Daniel is about to make the dumbest move in Big Brother history and he is not going to stop him.

Time for the Veto meeting. Daniel decides to use the Veto to take Alyssa and Indy off the block. Monte has to name a new set of festie besties, he names Nicole and Taylor, and says this is the best decision for his game. Operation backdoor Nicole is going ahead as planned. Nicole is excited to be on the block, she thinks she and Daniel are killing it.