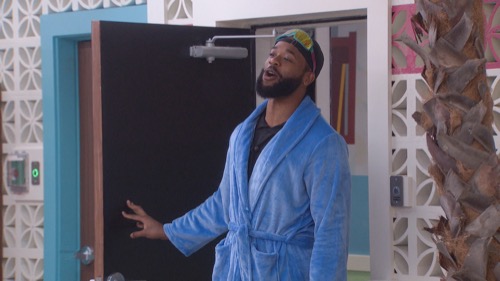 Tonight’s Big Brother episode begins with Kyle telling Monte that Daniel is going to use the Veto. Daniel is convinced that he had the numbers to keep Nicole in the house and send Taylor home. Kyle only found out about this just before the Veto meeting so some of the Leftovers were blindsided, including Taylor. Meanwhile, Alyssa is thrilled that Kyle took her off the block and says he redeemed himself.

Taylor is so angry that she is shaking, she has no choice but to have faith in her alliance. Nicole is feeling euphoric, she doesn’t think that Monte has the votes to send her home and she can’t wait to see Taylor leave.

Outside, Kyle tells the Leftovers that Daniel thinks he has the votes to keep Nicole safe.

Nicole tells Jasmine, Indy, and Alyssa that she was a police officer for ten years before she became a chef, and she was a detective for two of those years. Jasmine wants her on her side. She tells them they have the numbers and they should also trust Daniel, Terrence, and Kyle.

Daniel and Nicole think they are controlling the house and Daniel says, “I am done with these clowns. You can’t get too comfortable in this game, that’s their problem. I love this game so much.”

Kyle is going crazy in the house, he can’t help it, he says Alyssa is so hot. Kyle is happy that Alyssa is still in the house, life is short, so he is going to have fun. Although, he doesn’t want it to look like they are in a showmance because he doesn’t want to be targeted. The two are in a room, Daniel is sleeping beside them and Kyle goes for it, he kisses Alyssa.

Monte wants to get more votes to keep Taylor in the house, so the Leftovers alliance isn’t shown.

Nicole goes to Monte, he tells her just to campaign and do what she does. She needs six votes to stay in the house and will say anything she can. She says if she stays and wins HOH, she will put up Indy, Jasmine, Turner, or Alyssa. Monte goes to Jasmine and tells her that Nicole very clearly said she would go after the girls.

Jasmine really wants to keep Nicole but she needs to tell Alyssa and Indy what is going on.

Indy still wants to get Taylor out, she says if she stays this week she will win the game.

Time for the live vote and eviction. Nicole says she came into the house with loyalty and integrity. This week has humbled her and if they keep her, she will continue to play that way, and make sure the right person wins the game. Taylor says to quote BB superfan, Rihanna, “ you look so dumb right now.” Choosing me as your festie bestie you thought was your security blanket but here you are, both of us sitting on the chopping block because you closest ally in the house, who thought you would still be safe? To the houseguests, you know where I stand. If you keep Nicole, you will get someone who will wrap you around their finger to get what they need. It’s not the game I choose to play moving forward.

After Nicole leaves the house Daniel tells the HGs they can’t all split the cheque so play for themselves. Everyone looks at him with a blank look!

Nicole tells Julie that Taylor’s speech was amazing and comical. She says her mistake was that she was playing her alliance’s game. She thought she had the votes to stay in the house and finally get rid of Taylor. She thinks Monte is responsible for her going home. Julie tells her about the Leftovers that were formed because of their unfair treatment of Taylor in the house.

Julie calls the HGs to the living room and tells them there is unfinished business. Taylor can choose to join a set of besties. She chooses Indy and Alyssa.