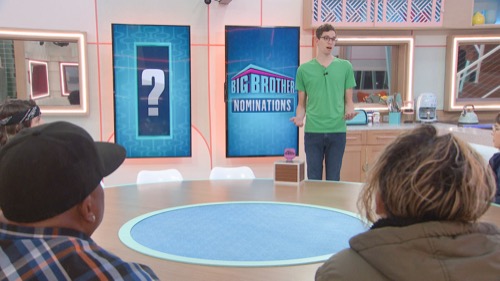 Tonight’s Big Brother episode begins with Jasmine and Alyssa talking about getting Monte out. Terrance and Daniel are talking and Daniel says he thinks they are going to backdoor him and they don’t know why because he is not a threat to anyone. Terrance tells him to win the Veto and keep nominations the same. Terrance thinks they should get rid of Monte, and keep getting rid of strong players. Terrance tells him that he is going to throw the Veto competition.

Taylor starts “muffin gate” in the house, somebody ate half her muffin and she wants to know who did it. She is staking the house, crawling around on an injured foot, but can’t play in the competitions? Taylor took the muffin, but he is not going to tell her and he calls her a low-rate Columbo.

In the HOH room, Taylor, Brittany, and Michael talk about Monte as well, the fact that he is a strong competitor and a huge threat. Michael then tells Kyle that he is not sold on the idea that Daniel has to go this week. Kyle doesn’t want Daniel to go, because his festie bestie, will go on the block and anything can happen.
Time to pick players for the Veto competition. Michael has to pick one name of a festie bestie duo to compete in the competition and he gets Turner and Jasmine.

Since Daniel didn’t get picked for the Veto competition, Terrance doesn’t care if he has to sabotage his festie besties, but he doesn’t want Turner and Jasmine to win and change the nominations.

The Veto competition features Otev as a singing stage roach. The players are dressed up as roaches and BBQ sauce is thrown on them to start the competition. In each round, Otev will sing a song about competition this summer and the name of a sauce he loves. It will be the player’s job to find the correct sauce from a pool of food scraps. When they find it, they have to pull themselves up a slide and show it to Otev.

Brittany is the first to be eliminated, then Jasmine, Turner, Joseph, Monte, and Terrance threw the competition and Michael won. He has now won all four Vetos that he has competed in.

Jasmine says Michael has the best opportunity to get rid of one of the biggest threats in the house, Monte, and she plans on putting a bug in his ear. She goes to Alyssa and Indy and tells them her plan. Terrance goes to see Michael and Brittany and he says he wants to see a bigger move and if they don’t take it, they don’t how they will have a chance again.

Michael says he sees the threat. Jasmine is next, then Indy tells him they should pooch him, Alyssa says if he got rid of Monte she would support him, and Daniel says it would be a huge insane more. Michael has been contemplating a big move, but he is very worried that this is a setup, too many people are going to him and saying the same thing.

Michael tells Turner what happened, and they are five people, who are trying to control the house.

Daniel thinks he has lived in the game, Terrance says when it is all said and done, he did it. Little do they know, Michael is telling Monte the whole thing and he says they are playing so bad.

Time for the Veto ceremony, and Michael decides to use his Veto to take Monte, Joseph, and Terrance. Daniel looks like he is going to faint. Michael then nominates festie besties, Daniel and Kyle.